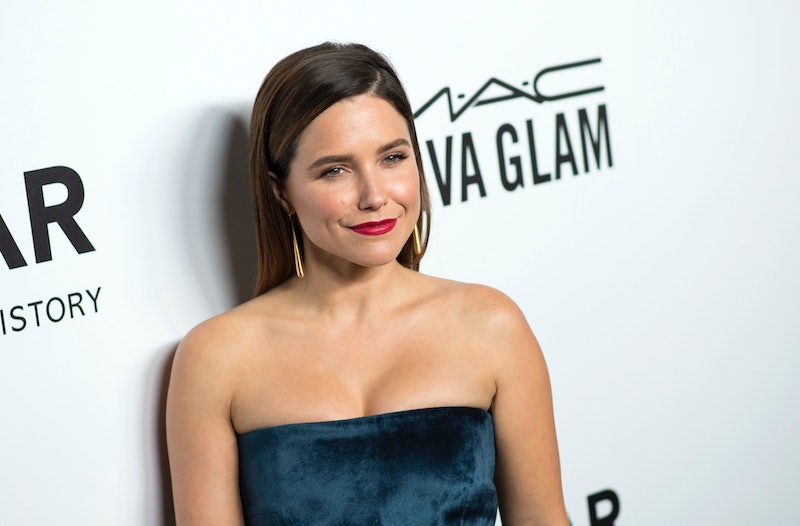 A week after the election, I remember being hit by the realization that everything I had taken for granted, from birth control to therapy, was far more fragile than I'd ever realized. Suddenly, it felt like everyone who had been suppressing their misogynistic ideals, had a free pass to be as inappropriate and demeaning as they liked. Before the election, like myself and many others, actor and activist, Sophia Bush believed our government would always try to do the best for its people.

It's up to us to fight for the rights we all deserve, and need, to be successful and safe in our own country now. "Democracy is a thing that takes all of us, it is a thing that requires all of our input and I think that there were a lot of us that really felt so good about where we were heading for a long time that we figured, they got it," Bush tells Bustle at the S.H.E Summit.

If you still feel overwhelmed and scared of your rights, it's OK — I know I am. But, I'm also ready to take every action I can to stop being scared. The impact women can have when they stand together was recently illustrated after women in Hollywood came forward, one by one, with allegations that Harvey Weinstein sexually harassed or sexually assaulted them. Following that, the #MeToo campaign resurfaced in the form of a viral hashtag and has became a force of power uniting women from every sector of life over harassment and assault stories.

So how can we keep moving forward with this momentum from women coming together and speaking out? Here's Bush's advice for standing up to men, because it's about time we took our power back.

1. Use Your Voice And Any Leverage You Have

If you are in a position of power and influence, use it to highlight wrongs others might be worried to address themselves.

You are never under any obligation to share your story, but it's good to acknowledge the benefits that telling just one person can have. "I think it has to come as a community effort and I think people who feel isolated need to tell someone," Bush says. "I think you begin to regain your power when you speak that which is happening to you."

Trauma from sexual harassment or sexual assault can feel overwhelmingly isolating. "Silence is the thing that makes you feel like you're alone, so you hide," Bush says. "That doesn't mean you have to complain immediately to HR; that doesn't mean you have to immediately start some big hullabaloo that you're intimidated to begin. You could just tell one coworker. One friend. If you begin to speak it, you begin to get your power back."

3. Never Judge How Others Handle Their Situation

While sharing your story may be beneficial in the long run, in the immediate it can be extremely difficult. How a woman decides to move forward from the harassment or assault she's faced is completely her decision and each choice is an extremely personal one that should not be judged by anyone. "There are exponential multipliers of ways in which women are subjugated and mistreated in the workplace and in the world," Bush says. "I think it's different for every woman. I think we can't judge women and how they respond, whether they respond loudly and speak out or whether they respond for many years with silence, hoping it'll stop. It's not on us to judge how they do that or when they do that. It's just on us to support them when they're ready."

4. Realize You're Not Alone

It's easy to feel like no one will understand what you've gone through or are still going through. Sometimes it takes a women sharing their stories to show you that others have walked in your shoes. "That's part of the reason #MeToo has become so viral," Bush says. "All of these women go, 'Oh wow. I'm not alone. I'm not crazy. The way he speaks to me is actual manipulation and he's a pathological liar and that's abuse.' You begin to be recognized and then you know you're not alone."

5. Never Allow Anyone To Demean You

From Trump's sexist actions and words to the removal of key legislation that helped survivors of sexual assault on college campuses, it feels like the government has become the very harassers they were supposed to be protecting us from. As a result, it can easily feel like there is no where safe to turn. "We are literally under attack from every single direction, all day, every day," Bush says. "And we're being told that our health care is not health care, we're being told that the way in which we manage our own bodies isn't our body management but it's actually just us being 'sluts'. We're being told that we don't deserve the same rights as men and then when we say, 'you're telling me I don't deserve the same rights as men?' they say, 'that's not what I said.' It's like, you can't tell me this is orange and then when I say, 'why is it orange?' tell me that you never said it was. It doesn't work that way."

It can feel like you're running in circles trying to get someone, anyone, to take you seriously and to treat you with the respect you deserve. "It's a really frustrating and demoralizing reality to live in when you look around and you realize that you're constantly being demeaned, being told you're not being demeaned, being lied to and then being told you're not being lied to," Bush says.

6. Take Your Seat At The Table

Sick of the NRA-owned cowards we have in office? You can make real change if you just take ownership of the voice you've got. "It's sort of incessant, but the thing that makes me hopeful and the thing that makes me excited is that I see women everywhere just refusing to take it anymore. Everyone is so sick of it and women are getting loud and they're getting organized and they're really, really getting passionate," Bush says. "And I truly do hope that this sh*tstorm that we're in becomes the thing that really turns a tide and that really empowers more women to run for office and to speak up and to run for local governments and to become more active in their communities."

7. Lift Each Other Up

Sometimes all we need is a reminder of the power history has proved we have when we unite as one. Recently, Bush spoke at another conference where Glennon Doyle took the opportunity to discuss America's history as a nation of sacrifice through what happened during World War II, "Everyone in America went on rations to make sure we could feed our soldiers and to make sure we could properly clothe them and to make sure we could build our planes and our boats and the whole nation pitched in together to take care of each other," Bush says. "And she ran from there all back through history and she just pulled all these beautiful examples up and said, this is always who we've been and, for whatever reason, now we're getting prayed on by leaders who want to tell us that our shared sacrifice for our shared uplift is a burden. But that's what people do."

It's completely normal to feel hopeless right now, but know that together, by using our voice, sharing our story, and empowering each other, we can face those who are taking away our rights. Now let's get to work.