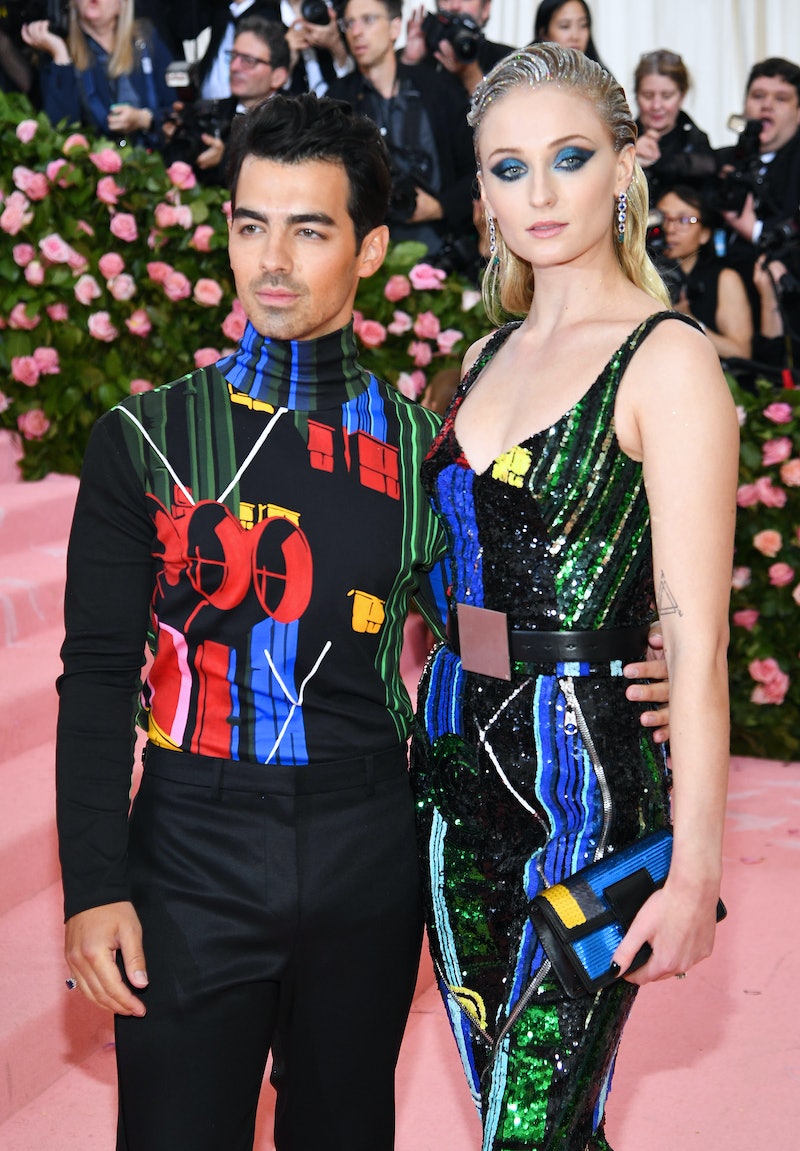 Weddings can be stressful for anyone — especially when the bride and groom are high profile celebrities and one of their famous guests is livestreaming. Maybe this scenario isn't the most relatable, but it did cause quite the stir at Joe Jonas and Sophie Turner's wedding. Fans got their exclusive look at the buzzworthy nuptials via one of the guests' Instagrams. Turner's Vegas wedding would've been private, she recently revealed to NET-A-PORTER's PorterEdit, had it not been for Diplo broadcasting the event on his Instagram Stories.

Turner and Jonas got hitched at a Las Vegas Chapel on May 1 after the 2019 Billboard Music Awards. The ceremony, which was officiated by an Elvis impersonator and ended with the exchange of Ring Pops, was super low-key. But according to the Game of Thrones actor, it could have been even more hush-hush.

"But it’s tricky when people livestream it," Turner told PorterEdit while reportedly "raising an eyebrow." She continued, "It would have been better if no one had known, but I actually think it was funny." When asked if she really would have been able to keep her spontaneous nuptials private, Turner replied, "Maybe not forever. I think at some point I would have had to stop saying 'fiancé,' but yes, I would have kept it a secret. Marriage is a private thing between two people and I think that's how it should always be. It's not about the dress, it's not about the food. It's about being husband and wife, and being dedicated to each other forever."

While Diplo was hired as the DJ for Jonas and Turner's wedding, his videography skills were not necessarily asked for, Jonas told London's Capital Breakfast With Roman Kemp recently. However, the "Sucker" singer says he and his new bride took Diplo's involvement in stride.

"I love Diplo, but he loves his 'gram more than a 13-year-old," Jonas said. "He posts every five seconds. He literally, like, live-streamed with dog face filters." Despite the unplanned livestream, Jonas said he and Turner "just laughed. We loved it. We thought it was ridiculous, and I just love that he was walking into the chapel and he was like, 'going to hit this wedding real quick,' [in his Instagram Story]."

While there doesn't seem to be too many hard feelings concerning Diplo's documentation, Jonas and Turner might make up for any mistakes with a second wedding. While Turner played coy with PorterEdit about a reported summer ceremony in France, she hinted at a confirmation on The Graham Norton Show May 24. Norton jokingly remarked about a second wedding, "It's in France. 15th of July...I have no idea." Turner replied, "That was a pretty good guess."

Jonas and Turner's private plans being impacted may change the nature of the potential French affair. Since the newlyweds' first ceremony was made public, the next exchanging of the vows could be confined to a strict no-phone policy. Or the pair could say la vie and share the day on social media.

While the couple's wedding plans continue to make news, Diplo could be starting a new career as DJ by day, wedding videographer by night. (Maybe Katy Perry and Orlando Bloom are in the market for one?)

More like this
You’ll Definitely Recognise Both Of Ty Tennant’s Parents
By Maxine Harrison
Rhys Ifans Has A Good Reason For Keeping His Love Life On The DL
By Maxine Harrison
'House Of The Dragon’s Theo Nate Is A “Massive” 'GoT' Fan
By Maxine Harrison
Who Is Nick Cannon Dating & How Many Kids Does He Have?
By Jordyn Tilchen and Radhika Menon
Get Even More From Bustle — Sign Up For The Newsletter