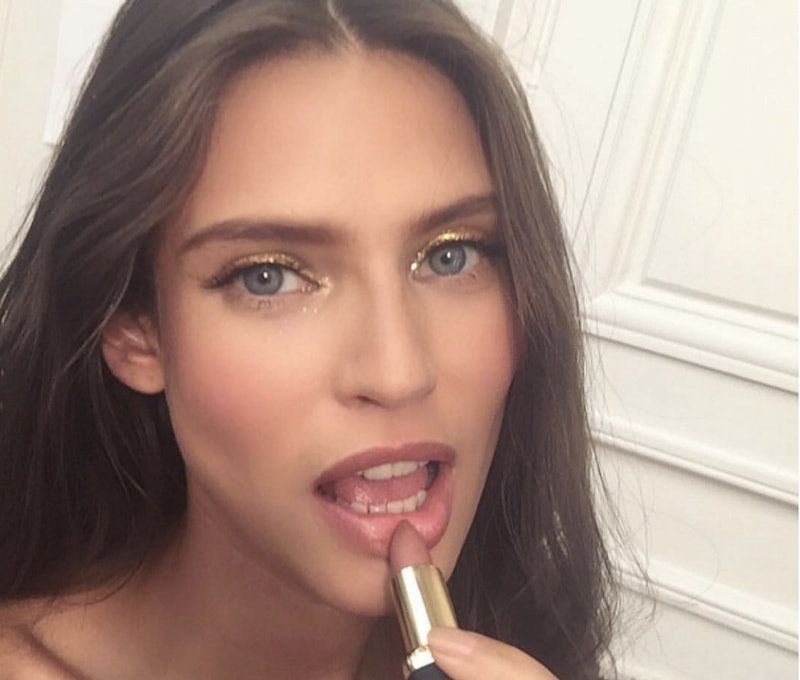 Bianca Balti has been modeling for 12 years, done campaigns with Dolce & Gabbana and L'Oreal, had two children, and, as of 2017, been named Sport Illustrated Swimsuit Edition's Rookie Of The Year. Rookie Of The Year (a title for models who have never appeared in SI before) is a big deal, even for a model who's been in the industry for over a decade. Past recipients of the award include Chrissy Teigen and Ashley Graham. But as Balti tells me in an interview, as a mother, and as a woman who has been building her career for years, she has a particularly interesting perspective on the modeling industry.

"I feel like [modeling] is the [job] with the most wrong ideas about it. To me, for a long time, it was almost scary when people would me like, 'what's your job?'" Balti says. "I was ashamed to say I was a model."

Balti has watched the industry change to be more inclusive. She's heard all of the still-prevalent stereotypes about modeling — how they don't eat, or don't really "do anything" — and she's managed to be successful through all of it. But how she views her success and her career now is much different than how she did a decade ago, Balti tells me. In fact, it couldn't be more different.

Balti tells me that the misconceptions about her career are so prevalent that even her family often questions it. "The funny thing is that even my family, they're like, 'Oh, so what did you do today?' and 'You were not working today.' And I'm thinking like, 'What do you think I do?'"

After 12 years in the industry, Balti is very familiar with the hectic work schedule of modeling. And although she tells me she always makes time for downtime, she emphasizes that even when she's not on a shoot or an interview, there's work in between.

"It is a lot of work. A lot of planning, thinking, making choices, eating on a schedule, staying on top of exercising. Anyway, we're working hard. Not only when we're working, but also the days before and after, we're traveling, we're planning," Balti says. "People think we have such an easy-going job, like we just go in front of a camera. But it takes a lot of preparation and time to take care of business."

While modeling has always been a hectic job, Balti's perspective on the industry and life changed even more when she became a mother.

"My first daughter will be almost 10, so I had her at almost the beginning of my career. But even then, she really made me understand that it was a job, and that it was very important to me to do my best and my job because it was an opportunity for me to give the best opportunities to my daughter," Balti says. "But even more now that we have my second daughter, I was 30 when I had her, and I think it's also an age thing. Everything that comes after that, I'm so very grateful for that even more than was before."

As a mother and a model, Balti has a lot to be proud of. And at 32, Balti's career isn't slowing down at all. In fact, having just been named Sports Illustrated's Swimsuit Edition Rookie Of The Year, it seems to only be growing and expanding to new levels of success.

"... I never expected my career to go on so long. And I feel like it's going strong and it doesn't seem like it's ending, so it's good to be able to realize that I'm lucky, and this is just the cherry on top of the cake."