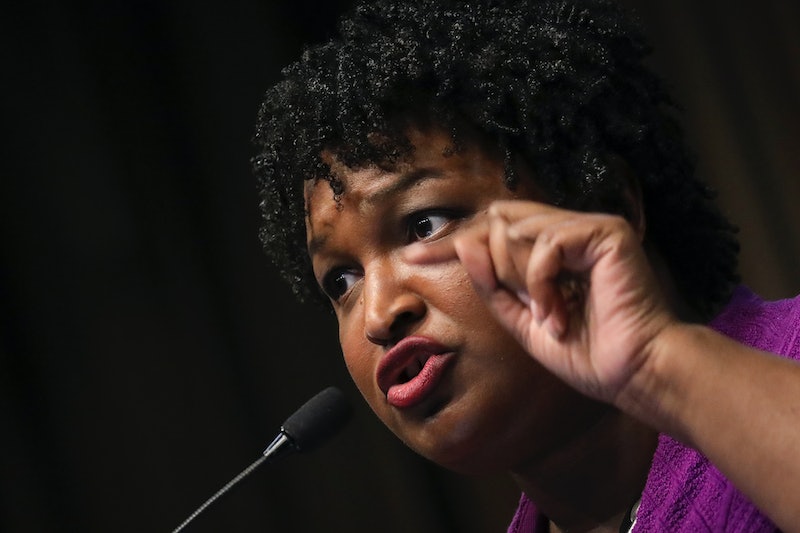 In an interview with The Root Tuesday, Stacey Abrams' comments on sex work focused on the importance of protecting women who consensually work in the industry and those who were trafficked. Abrams, who narrowly lost a disputed election for Georgia's governorship, also confirmed that she's considering a 2020 run for the presidency, but gave no timeline for when she'll make an announcement.

"I think we’ve seen in a number of countries and, in a number of states, progress made towards making certain that women are protected,” Abrams said when asked if she had any thoughts on the decriminalization of sex work. “And that ultimately should be the point. Women should not put their lives at risk because of sex. And whether it is seen as a commercial enterprise, or it's human trafficking, our obligation is to create a safe space so that no woman risks her life because of sex."

Although sex work hasn't traditionally been a high-profile issue in presidential campaigns, that appears to be changing. Two Democratic candidates for president — Sen. Kamala Harris and Rep. Tulsi Gabbard — have come out in favor of decriminalizing prostitution since they launched their presidential campaigns, the Root and BuzzFeed News report. A third candidate, Sen. Bernie Sanders, told the Breakfast Club that he doesn't have a position on the issue but that it's a "good question" to be asking.

However, all of this is somewhat complicated by the fact that Harris, Gabbard, and Sanders all voted for FOSTA, a piece of legislation that's almost universally loathed by sex workers. Although ostensibly aimed at cracking down on human trafficking, sex worker advocacy groups say the law has made consensual sex work much more dangerous for women, in large part by shutting down websites that allowed them to trade tips on safety and screen potential clients.

SESTA/FOSTA enjoyed near-universal support in Congress: Only two Senators and 25 representatives voted against it. Every lawmaker running for the Democratic nomination for president voted for the legislation, and one — Sen. Amy Klobuchar — co-sponsored it.

Abrams didn't vote for SESTA/FOSTA as she's never served in federal Congress, and she hasn't publicly taken a position on it. Likewise, she didn't explicitly say whether or not she supports decriminalizing prostitution when asked about the topic on Tuesday. But it is noteworthy that, in response to a question about the possibility of decriminalizing sex work, she stressed that the government should "create a safe space so that no woman risks her life because of sex," even in cases of "commercial enterprise."

In the same interview, Abrams was asked about 2020 and what factors she's taking into consideration as she weighs a presidential run.

"I use the framework that says: What's the right job? What's the right time? And am I the right person?" Abrams said, noting that she's also looking at a possible Senate run or another go at Georgia's governorship. "I think it's difficult to say no to opportunity, but I think it's important not to do something simply because it's available."