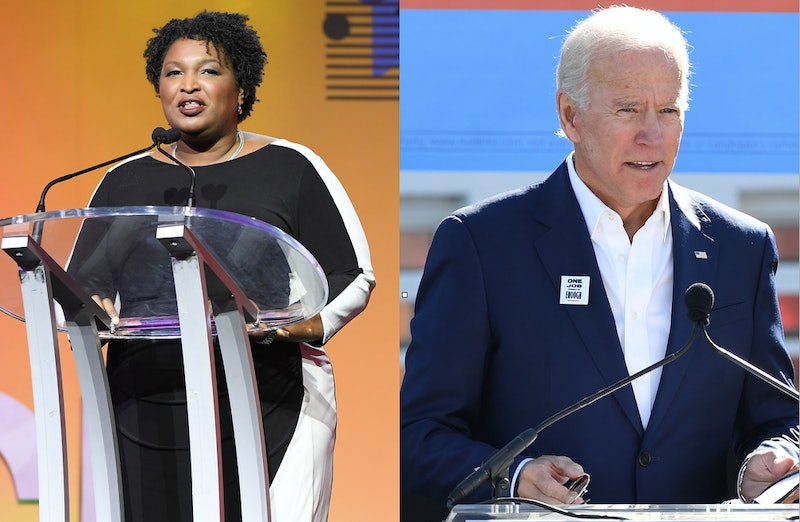 In recent days, several women have said that former Vice President Joe Biden had touched them in ways that made them uncomfortable. On Wednesday, Biden released a statement in which he addressed, but did not apologize for, his behavior, saying he's "heard what these women are saying" and will "be more mindful" going forward. According to Politico, Georgia Democrat Stacey Abrams acknowledged Biden's comments in an interview with MSNBC a day later, and praised him for holding himself "accountable" even though he didn't explicitly apologize.

“We cannot have perfection as a litmus test,” Abrams said on MSNBC, according to Politico. “The responsibility of leaders is to not be perfect but to be accountable, to say, ‘I've made a mistake. I understand it and here's what I'm going to do to reform as I move forward.’ And I think we see Joe Biden doing that.”

Both Biden and Abrams, who narrowly lost a race for Georgia's governorship in 2018, have said publicly that they're contemplating 2020 presidential runs. Axios reported in March that Biden's advisers were considering a plan to announce Abrams as Biden's vice presidential pick before he won the primaries, but Biden's spokesman Bill Russo said on Twitter this isn't the case, and Abrams knocked down the idea in an interview with The View soon thereafter.

Last week, Nevada politician Lucy Flores wrote an essay in The Cut in which she said that, at a 2014 campaign rally, Biden placed his hands on her shoulders, smelled her hair, and gave her a kiss on the back of the head, leaving her "shocked" and "mortified." Since then, six other women have told various publications their stories of Biden touching them in ways that made them uneasy, The Cut reports. Biden has not at any point been accused of sexual misconduct.

On Wednesday, Biden posted a video response on Twitter in which he acknowledged that "social norms are changing," and said that he will "be more mindful about respecting personal space in the future." However, he faced criticism for not actually apologizing in his statement; Sofie Karasek, who said Biden crossed the boundary into her personal space at the Oscars in 2016, told the Washington Post that Biden "still didn’t take ownership in the way that he needs to" in the video he released. Meanwhile, Flores released a statement noting that Biden still "hasn't apologized to the women he made uncomfortable."

In her interview on Thursday, Abrams, however, credited Biden for "acknowledg[ing] the discomfort that he's caused" and pledging to behave differently going forward, Politico reported

"He's created context for why that is his behavior, and he has affirmed that he will do something different going forward. And I think that’s what we should be looking for," she told MSNBC, according to Politico. "Because we're going to find out things about everybody running for office — whether it’s for the presidency or for school board — and we have to as a people be ready to forgive, but forgiveness does not mean you accept it unless what you see is accountability and an attempt at reformation so that more people can feel included and believe that their needs will be met.”