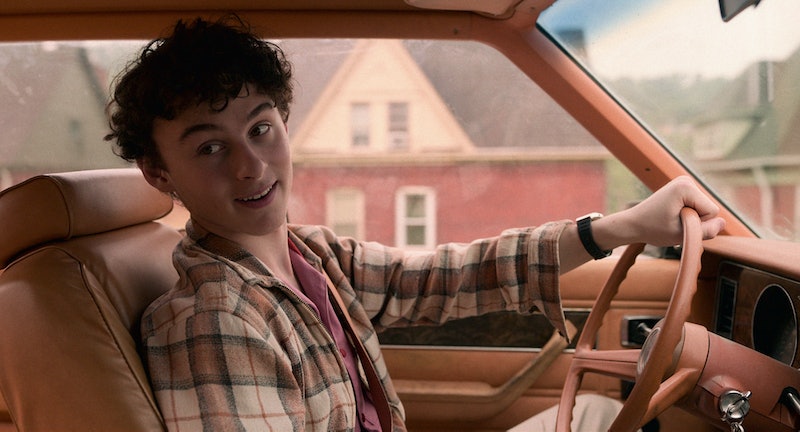 Spoilers ahead for I Am Not Okay With This Season 1. Netflix's new superhero drama I Am Not Okay With This is full of homages to the '80s, and nowhere is that more evident than with Stanley Barber, played by IT's Wyatt Oleff. Though the character is relatively minor in the comics I Am Not Okay with This is based on, he gets an expanded role in the show, and the result is a lot like the fashionable and loveably awkward Duckie from Pretty in Pink.

At around 160 pages, Charles Forsman's original graphic novel is pretty short, which explains why I Am Not Okay With This' first season is a quick watch as well. The comic reads more like a series of vignettes in which Syd explores the confusing effects of adolescence. There's no overarching story like in the show; instead, it's just Syd battling against her mounting depression as she wonders why she has thigh pimples, messy feelings for her friend Dina, grief about her father that she can't overcome, and of course, telekinetic powers.

In the grand scheme of things, Stanley is just a blip on her radar in the comics. He shows up in a chapter entitled "Weed," and Syd describes him as a stoner who lives down the block from her. Unlike the show's version of the character, he's bespectacled and appears to be pretty unfashionable, wearing just a hoodie and jeans. "Most people call him Goob," Syd explains. "I've known him since we were kids. I still call him Stan ... I think Stan kind of has a weird crush on me."

Also unlike the show, Stanley hangs out with a group of stoner kids, who he doesn't seem to realize are always making fun of him. Syd continues to hang out with Stanley to avoid dealing with the fallout from kissing Dina, but she doesn't see it as meaningful. They're not so much friends as just casual hook-ups, and their meetings are always punctuated by smoking, having sex, and then lazing out on the couch. In the end, Syd sees Stanley as a useful distraction from her sadness, but not a significant figure in her life. "Good old Stanley," she notes after smoking a bowl with him.

In the Netflix adaptation, Stanley becomes a much more important fixture in Syd's life. Although Stanley does still have a crush on Syd and they do still give their virginity to each other, Stanley also learns of Syd's powers and ends up becoming as important to her as Dina. With the way Syd appears pulled between Dina and Stanley at the prom, it's even implied that Syd sees Stanley as a sort of platonic soulmate, whereas Dina is her romantic one.

Stanley also comes to embody the '80s culture that's embedded in the show, decked out in colorful and fabulous clothes and introducing Syd to his record collection. He wears suits and sunglasses similar to Duckie in Pretty in Pink, a fitting reference considering Duckie doesn't get the girl either.

Still, Andie and Duckie are close friends in the film, which sets a precedence for Stanley in the show. With Season 1 ending on a bloody cliffhanger, Syd will likely need all the friends she can get if I Am Not Okay with This is renewed. Comics Stanley may have just been a random side character, but Netflix's Stanley seems like someone who'd be ready to stand by Syd's side, no matter what. This is actually the most important and significant change from the comics: Syd becomes so despondent and isolated that the comic ends with her using her powers to die by suicide. With Dina and Stanley having more developed roles in the show, it appears the creators intend to take this story in a brighter direction — one where hopefully, Syd does realize she has friends who love her.

More like this
Nicola Coughlan Shared A Lady Whistledown Excerpt From ‘Bridgerton’ Season 3
By Grace Wehniainen, Alyssa Lapid and Sam Ramsden
'Heartstopper' S2 Just Welcomed Four Brand New Cast Members
By Nola Ojomu and Sam Ramsden
Here's What Jeffrey Dahmer's Dad Has Said About His Other Son, David
By Grace Wehniainen
Where Is Lionel Dahmer Today? Jeffrey Dahmer’s Father Reflected On The Serial Killer’s Death In 2020
By Brad Witter
Get Even More From Bustle — Sign Up For The Newsletter