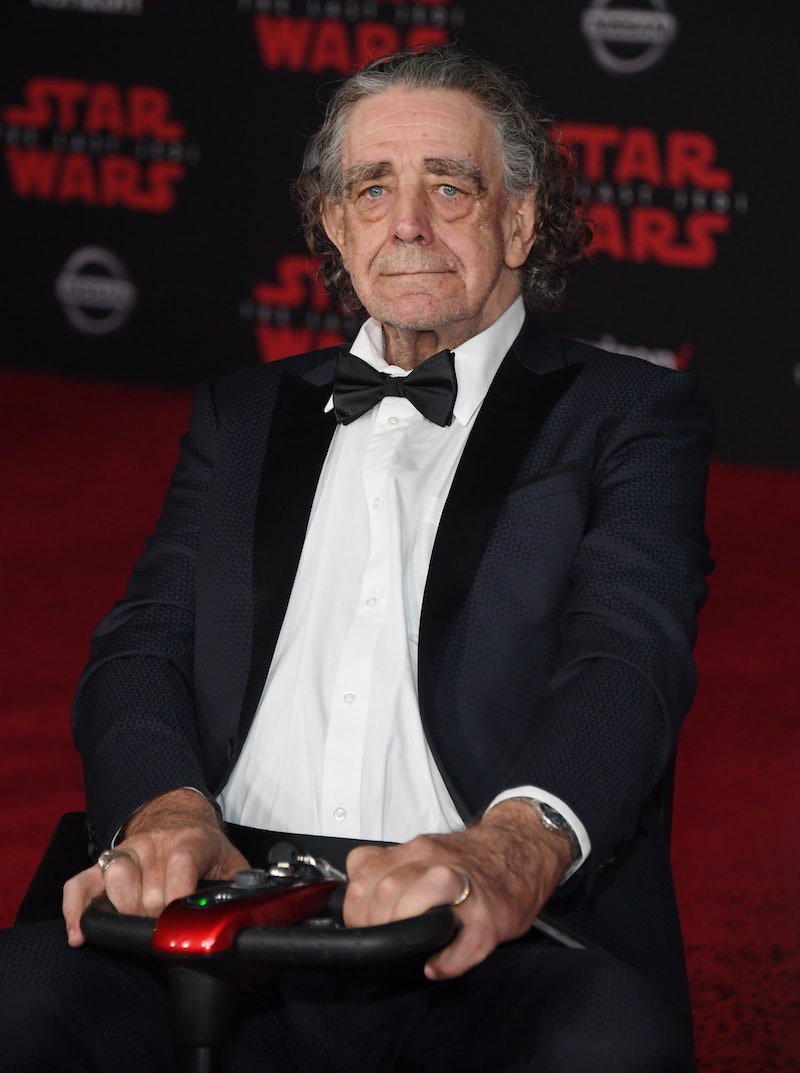 Co-stars and fans alike are mourning the loss of Peter Mayhew, who was best-known for playing Chewbacca. The Star Wars actor died on Tuesday, his family has confirmed. In a statement posted to Mayhew's Twitter account on Thursday, the actor's family shared that he passed away on Tuesday at his home.

"The family of Peter Mayhew, with deep love and sadness, regrets to share the news that Peter has passed away," the tweet reads. "He left us the evening of April 30, 2019 with his family by his side in his North Texas home."

The tweet also includes an image containing a longer statement about Mayhew's role as Chewbacca. The family shared in the message that despite being wheelchair bound later in life, Mayhew was able "to stand tall and portray Chewbacca once more in Star Wars: The Force Awakens."

The statement also emphasizes how much love Mayhew had for his Star Wars costars. "To him, the Star Wars family meant so much more than a role in a film," the actor's family wrote. "The relationships that began then grew into the friends and family that he would love for decades to come."

"He was the gentlest of giants-A big man with an even bigger heart who never failed to make me smile & a loyal friend who I loved dearly-I'm grateful for the memories we shared & I'm a better man for just having known him. Thanks Pete #RIPPeterMayhew #Heartbroken @TheWookieeRoars"

Joonas Suotamo, who has taken over as Chewbacca in the latest Star Wars movies, also shared his condolences for the late star. Suotamo called Mayhew a "dear friend and mentor," writing,

"Peter's warm welcome when I came aboard as his double in The Force Awakens meant so much to me. Studying the character he helped create was always a daunting task, but one that was made easier by his tutelage and kindness as we sought to bring Chewbacca to life for a new generation. He was an absolutely one-of-a-kind gentleman and a legend of unrivaled class and I will miss him."

As The Associated Press reported, Mayhew was an unknown actor before George Lucas cast him in the original Star Wars films. According to his IMDB page, Mayhew was in just one movie before Star Wars. (The movie, Sinbad and the Eye of the Tiger, was released just a few months before Star Wars: Episode IV.)

In the family's statement, the actor's loved ones confirmed that Mayhew's memorial will be held on June 29. And a separate memorial for fans will take place in Los Angeles in December, the statement noted. The actor's family also encouraged fans to donate to the Peter Mayhew Foundation, which is a nonprofit "devoted to the alleviation of disease, pain, suffering, and the financial toll brought on by life's traumatic events," according to the organization's website.

Mayhew may be gone, but he and his character will live on in the hearts of fans and of his fellow actors.

More like this
Lin-Manuel Miranda & Tituss Burgess React To 'Little Mermaid' Casting Backlash
By Radhika Menon
‘RHOSLC’ Star Jen Shah’s Arrest & Legal Drama, Explained
By Brad Witter and Jake Viswanath
A New 'And Just Like That' Table Read Pic Confirms A Key Character's Return
By Jack Irvin and Grace Wehniainen
Everything To Know About 'RHONJ' Season 13
By Brad Witter and Jake Viswanath
Get Even More From Bustle — Sign Up For The Newsletter