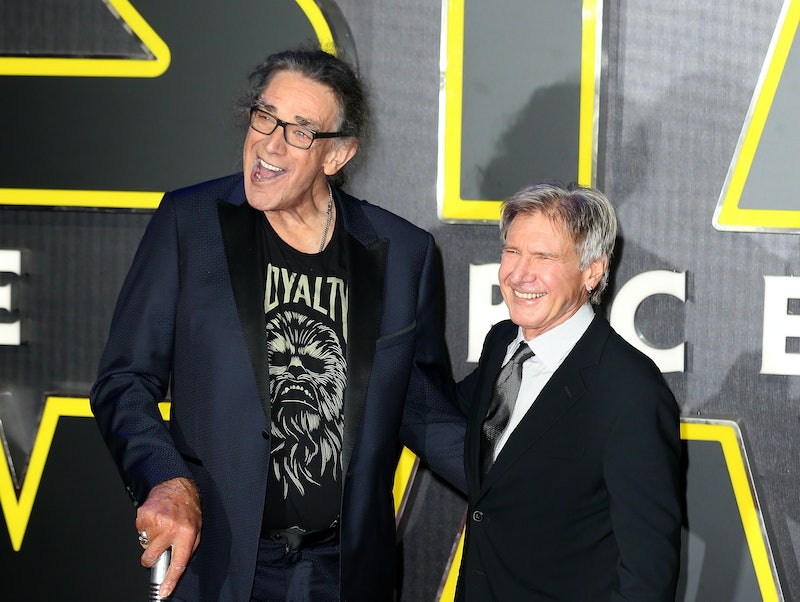 Peter Mayhew, he actor who originated the beloved role of the Wookiee Chewbacca in the Star Wars franchise had died. Following his family's May 2 announcement on Twitter about his passing, members of the Star Wars cast reacted to Mayhew's death, sharing tributes to the actor on social media. Fans are also mourning the performer, who The New York Times reported died of a heart attack at his home in Texas at the age of 74 on April 30. And these messages from the cast and crew of Star Wars, including original co-stars Harrison Ford and Mark Hamill, show how much Mayhew meant to the people he worked with.

The most well-known Wookiee in all the universe was first introduced to the world back in George Lucas' 1977 film Star Wars: A New Hope. As The Hollywood Reporter noted, Lucas cast the then-hospital orderly as Han Solo's copilot due to his 7-foot-three height, since the filmmaker needed someone who was taller than Darth Vader body actor David Prowse. After A New Hope, Mayhew went on to play Chewbacca in the rest of the original trilogy, The Empire Strikes Back, Return of the Jedi, one of the prequels, Revenge of the Sith, and the first film of the new trilogy, The Force Awakens. Mayhew's last performance as the Wookiee was in the 2015 film, with his family sharing in their statement, "He fought his way back from being wheelchair-bound to stand tall and portray Chewbacca once more in Star Wars: The Force Awakens."

The Star Wars website noted that the British-born actor was a consultant for The Clone Wars animated series and acted as a mentor to Joonas Suotamo, who has assumed the role of Chewbacca since The Force Awakens. And based on these tributes from the cast and crew who knew him, Mayhew's presence in real-life was just as toweringly warm as his character.

More like this
Lin-Manuel Miranda & Tituss Burgess React To 'Little Mermaid' Casting Backlash
By Radhika Menon
Margot Robbie Breaks Her Silence On *That* Viral 'Barbie' Moment
By Maxine Harrison
A New 'And Just Like That' Table Read Pic Confirms A Key Character's Return
By Jack Irvin and Grace Wehniainen
‘RHOSLC’ Star Jen Shah’s Arrest & Legal Drama, Explained
By Brad Witter and Jake Viswanath
Get Even More From Bustle — Sign Up For The Newsletter