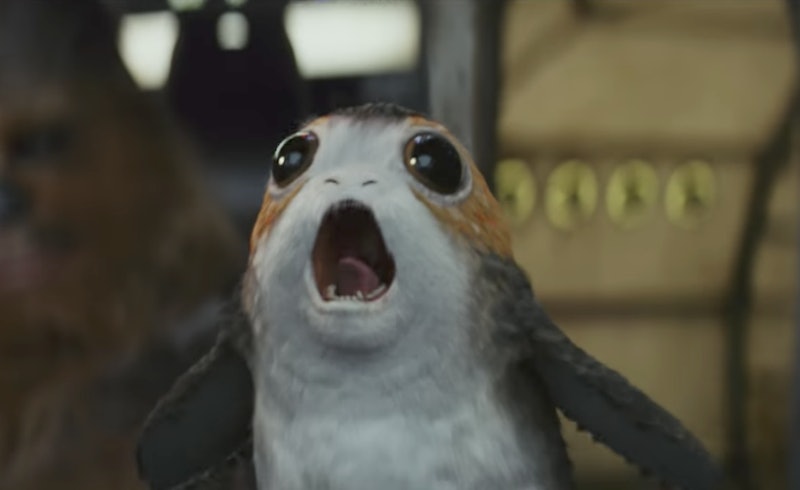 On Tuesday, the Star Wars: The Last Jedi full trailer officially dropped. As you can imagine, fans reacted strongly to the newest footage from the franchise, but there was one particular character that turned heads — the porg. It appears to be a tiny furry creature who can steal even Chewbacca's spotlight by making cute little noises. Because of the internet, there are now Star Wars porg memes flooding social media.

Wired describes a porg as follows: "The little creature — a Furby-esque species native to the world where Rey and Luke Skywalker met at the end of The Force Awakens." To be clear, the trailer isn't the first time fans have seen a porg. In July, a D23 behind-the-scenes video showed a porg. At that time, the name of the creature was still unknown.

That same month, Lucasfilm's story group's Pablo Hidalgo opened up on StarWars.com about the porg by first revealing its name. He explained, "Porgs are native to Ahch-To. In many ways, they’re the Star Wars version of puffins. They build nests. They can fly. Their babies are called porglets. You fall into those deep, soulful eyes. I think a lot of people are going to want a porg as a pet." If you're curious about their demeanor, Hidalgo added, "Given how rarely their island has visitors, their curiosity outweighs any skittishness they may have."

He also provided input into why he thinks people are so obsessed with porgs. "Ever since that roadside scavenger let out that belch outside Jabba’s palace in Return of the Jedi, the idea that there’s an entire animal kingdom living amid the drama and adventure of the Star Wars saga is a compelling one." Hidalgo continued, "Besides, porgs are cute. You fall into those deep, soulful eyes. I think a lot of people are going to want a porg as a pet."

In September, director Rian Johnson revealed on Twitter that "a group of porgs is a murder," in case you were wondering. And if you find yourself connecting with porgs, you'll be happy to know there will be plenty of porg merchandise.

As for the following memes, well, Twitter users have gone to a lot of effort to create some worthy ones. Like one Twitter user wrote, "This could very well be the meme that ends all memes." She might not be wrong, but until that happens, check out these porg memes, stat.

You can't go wrong with some Titanic humor.

She'll probably win an Oscar for it.

The porg is where it's at.

It Really Is Super Sweet

How Def Leppard's song will forever be heard now.

What Everyone Is Thinking

The Movie Poster That Should Be Used

William Shatner Has Something To Say

He just had to get in on the meme action.

A New Take On The Queen Song

The only Bohemian Rhapsody cover that matters.

The Next Star Wars

It Makes A Perfect Reaction

This is everyone right now.

If you thought BB-8 was a major hit, well, now there are porgs. There's no denying they are beyond adorable, and even more so when they belt out that tiny cry. Their cuteness will most likely become an even bigger hit come Christmastime. Just imagine all of the porg toys and how many people are are going to be very upset when they can't get themselves or a loved one anything porg-related. The Last Jedi hasn't even been released yet and there is already porg madness. Good job, Star Wars.

More like this
Twitter Is Unravelling Over Wolverine’s Return For 'Deadpool 3'
By Darshita Goyal
KiKi Layne & Ari'el Stachel Call Out 'Don't Worry Darling' Over Cut Scenes
By Sam Ramsden
Everything You Need To Know About ‘Black Panther: Wakanda Forever’
By Bustle Editors
The 50 Most Powerful Characters In The Marvel Universe, Ranked
By Johnny Brayson and Nola Pfau
Get Even More From Bustle — Sign Up For The Newsletter