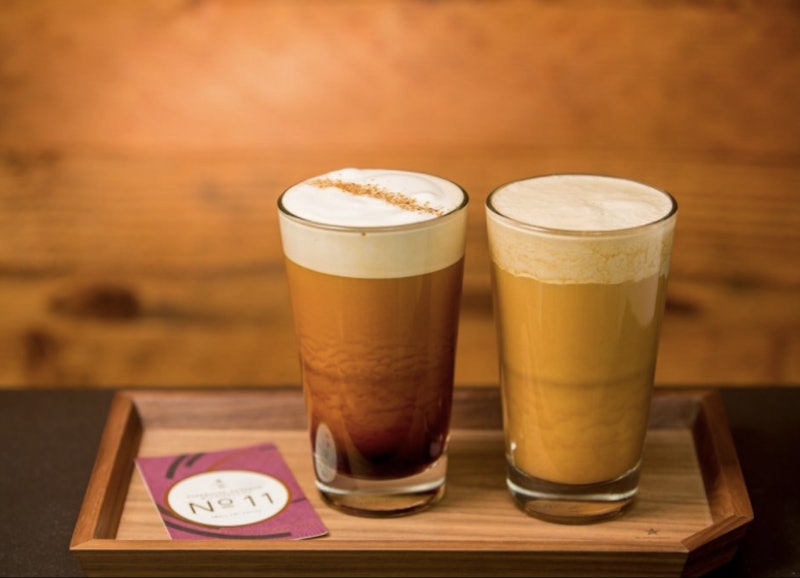 For the past few months, Starbucks, your favorite purveyor of coffee and easily accessible public restrooms, has been cranking out a whimsical array of dreamy, pastel-colored drinks. First there was the Unicorn Frappuccino, which sent Instagram into a glittery tailspin, then creative people riffed for the Dragon Frappuccino, and the Narwhal Frappuccino, as well as the Pink Drink and its Millennial cousin, the Ombre Pink Drink. Now, Starbucks is releasing two new, non-pink summer beverages: the Starbucks Nitro Cascara Cloud, and the Starbucks Nitro Dirty Chai.

Both drinks use Starbuck’s Nitro Cold Brew, the brand’s signature cold brewed coffee which is infused with nitrogen to give it a rich, smooth, velvety texture, and makes your order sound edgy and futuristic. The Nitro Cascara Cloud elevates the flavor of Starbucks’ Nitro Cold Brew by incorporating cascara, the dried fruit of the coffee cherry itself.

“The beverage is made with nitrogen-infused Starbucks Cold Brew, slow-steeped to bring out its dark chocolate body, berry notes, and rich, port-like flavor,” Starbucks said in their press release, “The beverage starts with vanilla bean syrup, and then a long pour of the Nitro Cold Brew. It’s topped with a velvety, meringue-like cold foam made with milk and cascara syrup, and finished with a strike of cascara sugar.”

The Nitro Dirty Chai is a blend of Starbuck’s classic chai tea, blended with cream, and topped with Starbucks’ Nitro Reserve Cold Brew. The result, according to Starbucks, “is a layered beverage with a creamy texture and a head of rich and airy chai foam.”

Starting on July 11th, the two drinks, which were developed at Starbuck’s Seattle Roastery, will be available at participating Starbucks Reserve bars in the U.S. and Canada. Starbucks Reserve is the brand’s premium coffee collection, which launched in 2011, and offers rare, small-lot coffees for a limited amount of time. The Reserve bars are basically a regular Starbucks store’s sophisticated cousin, the one who studied abroad in Barcelona and unironically wears berets.

The Nitro Cascara Cloud and the Nitro Dirty Chai will be joining an impressive line up of other specialty drinks at the Reserve bars, including the Melrose (which, to the best of my knowledge, has no connection to Netflix’s GLOW character) which is Starbuck’s Reserve Cold Brew, shaken with cherry bitters and topped with a maraschino cherry, and the Cold Brew Float, Starbucks’ Reserve Cold Brew poured over a scoop of ice cream — every adult child’s dream.

For those of you interested in checking out these new, non-pink, non-animal inspired drinks, find your nearest Starbucks Reserve bar with the store locator here, and enjoy a nitrogen-infused caffeine rush to power through the summer!