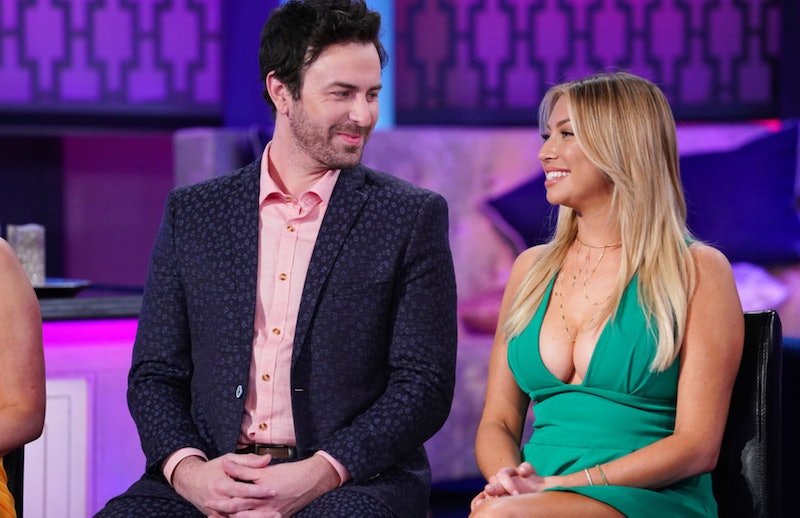 Love is in the air... or maybe that's goat cheese balls. On a new episode of the Vanderpump Rules after show, Sexy Unique Couple Stassi Schroeder and Beau Clark recapped the first time they met, sparing no endearingly awkward detail. “It’s actually really crazy because we didn’t even previously get into the whole story,” Stassi began. And now, thanks to this new ep of the Pump Rules after show, we know a little more about how Stassi and Beau's first interaction went.

As Stassi has said before, Kristen Doute and Katie Maloney were determined to make Stassi and Beau a thing after the whole Patrick Meagher situation was over. Kristen showed Stassi’s Instagram account to Beau, and vice versa, but neither party took the bait. Rather than give up on what she believed could be a good couple if they just gave it a chance, Kristen kicked her matchmaking efforts into high gear. “Once I finally went through my real breakup with my ex-boyfriend, then she kind of forced us to meet,” Stassi explained on the Pump Rules after show. What's that saying? You can lead a horse to your fight night party, and you can try to make it fall in love with another horse? Sure, something like that.

Anyway, back in August of 2017, Kristen invited Stassi and Beau over to watch the Conor McGregor vs. Floyd Mayweather match. When they saw each other at the party, their nerves almost got the best of them. “The minute [Stassi] walked in, I was like, ‘F*cking Kristen. God," Beau chimed in. "Blind dates, the awkwardness, ‘cause now I know that I have to meet her and say hello and I knew what Kristen was doing. And I got a little insecure and, you know, uncomfortable because she’s pretty and very bossy."

A whopping 90 minutes went by before they finally interacted. "I marched myself up to him and in my brain I was like, ‘Enough of this game,'" Stassi recalled. She also said she felt "awkward, too" but "was only [there to watch the fight] because Kristen was like, 'Beau's going to be here, it's an organic time for you to meet him.'"

As nervous as they were to meet one another, the chemistry was clearly there from get-go. Less than a week later, Beau and Stassi ended up at another one of Kristen's events, and the two "ended up talking throughout the whole night, closed the bar down." Beau said,

“They had a guy that took a Polaroid of us. We have two pictures of us. In one we look really nice, in the other we’re flicking each other off. If you look back on it now, that’s such our dynamic. You would think we’d already been together for already a year, like a photo we’d take now with each other. So yeah, it was a little foreshadowy. So it’s just kind of cool to see those photos that we have.”

In February of 2018, Stassi officially announced that she’d started dating a new dude named Beau, and they are still going strong.