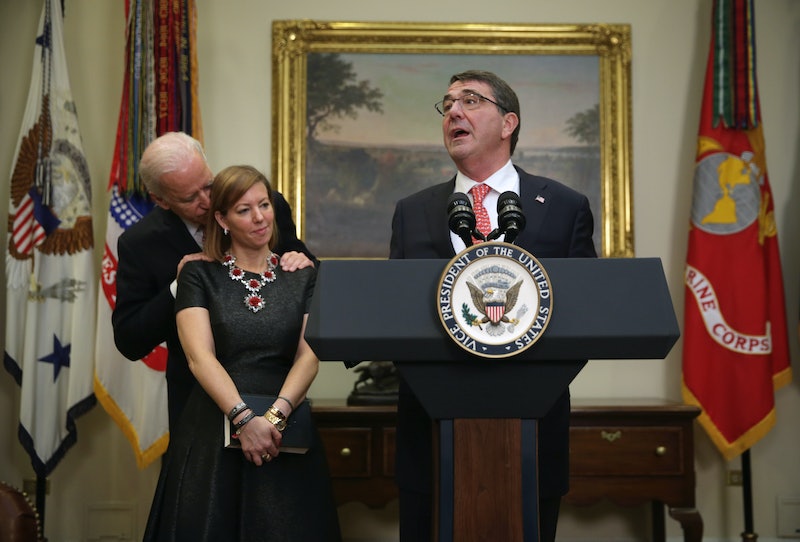 Allegations of inappropriate touching and kissing levied against Joe Biden late last week renewed debate over a photograph snapped of the former vice president in February 2015. Taken during a swearing-in ceremony, the photo depicts Biden leaning in to whisper something to the wife of the now former defense secretary as his hands rest on her shoulders. But Stephanie Carter says her photo with Biden wasn't the #MeToo moment others have claimed it to be. The wife of former Defense Secretary Ash Carter sought to "reclaim" her story Sunday, saying the viral photo had been "misleadingly extracted" from a moment between close friends.

"The Joe Biden in my picture is a close friend helping someone get through a big day, for which I will always be grateful," Carter wrote. "So, as the sole owner of my story, it is high time that I reclaim it  —  from strangers, Twitter, the pundits and the late-night hosts."

In a post published to Medium, Carter went on to claim the photo had been "misleadingly extracted" by those using it as an example of the former vice president's allegedly inappropriate physical interactions with women. According to Carter, Biden had arrived to her husband's swearing-in ceremony to find her "uncharacteristically nervous" thanks to a fall in front of reporters earlier in the day. As an old and close friend of both her and her husband, Carter says Biden sought to offer her support and reassurance.

"After the swearing in, as Ash was giving remarks, [Biden] leaned in to tell me 'thank you for letting him do this' and kept his hands on my shoulders as a means of offering his support," Carter wrote. "But a still shot taken from a video  —  misleadingly extracted from what was a longer moment between close friends  —  sent out in a snarky tweet  —  came to be the lasting image of that day."

The photograph of Biden and Carter taken in 2015 has been described as "odd" and even evidence of Biden's "creepiness," with some assuming Carter was "annoyed" or making a "Get-your-hands-off-me" expression. It was thrust back into public discussion Friday, when former Nevada state assemblywoman Lucy Flores accused Biden of having inappropriately touched her shoulders, smelling her hair, and kissing the back of her head while at a 2014 Democratic campaign rally. In an essay published by New York magazine's website, The Cut, Flores said the incident had left her "embarrassed," "shocked," and "confused."

"I wanted nothing more than to get Biden away from me," she wrote.

Biden responded to Flores' allegations over the weekend, saying he did not believe he'd acted inappropriately but would listen respectfully to those who suggested he had. "I may not recall these moments the same way, and I may be surprised at what I hear," a statement from Biden read. "But we have arrived at an important time when women feel they can and should relate their experiences, and men should pay attention. And I will."

On Sunday, Carter opened up about how frustrating and upsetting it had been to see how so many had presumed to know the narrative behind the photo. She said she'd discussed with Biden and his wife how awful she felt over the photo turning Biden's support and friendship into a joke and "supposed proof positive that he didn't understand how to respect women."

"I thought it would all blow over if I didn't dignify it with a response," she wrote of the viral photograph. "But clearly that was wishful thinking. I won't pretend that this will be the last of that picture, but it will be the last of other people speaking for me."