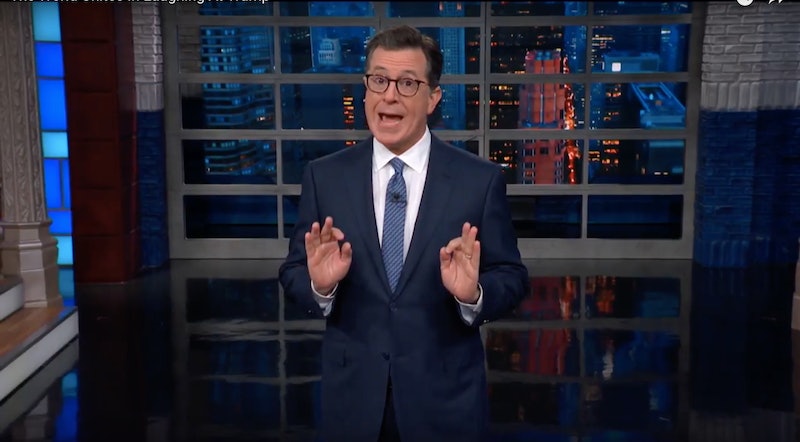 The Late Show With Stephen Colbert

On Tuesday morning, when President Donald Trump gave a speech before the United Nations General Assembly, a certain line elicited an unexpected moment. Trump's claim that his administration has “accomplished more than any administration in the history of our country,” drew laughs from the audience. Always one to pounce, Stephen Colbert mocked the laughter at Trump's UN Speech in his monologue on The Late Show. And two lines in particular drove the point home.

When the laughter from the crowd subsided, Trump played off the reaction, saying, “Didn’t expect that reaction, but that’s OK.” Later on in the day, Trump responded to reporters and insisted that the line was deliberate and meant to be funny, saying, “Well that was meant to get some laughter, but it was great.”

Colbert didn't miss the opportunity to seize on the president's international gaffe. “Don’t worry, Mr. President, they’re not laughing at you,” the host said. “They’re laughing with each other at you.”

The CBS host also ridiculed Trump for apparently arriving late to his own party: the president wasn't present when it was his turn to speak, forcing the president of Ecuador to go on stage during Trump's slot.

"C’mon, man! You’re from New York!” Colbert said. “You know what the traffic is like when the UN is here. Just take the subway. I know it smells like pee, but rumor is you like that.” (Colbert is referring to a dossier that made claims about Trump and Russia.)

Colbert went on to highlight parts of Trump's speech in which he criticized Iran, China, Germany, and Venezuela. But, the host mentioned, the president did take the time to praise one world leader: North Korean leader Kim Jong Un.

"I can't believe the only guy he praised was Kim Jong Un. Putin is going to be jealous," Colbert sang out.

Trump's speech was another rallying cry for a theme heard often on his campaign trail: America First. But his attempt to convince the world of American strength was met with doubt, as the president saw during the audience's laughter, according to Vox.

"We will never surrender America's sovereignty to an unelected, unaccountable global bureaucracy," Trump said. "America is governed by Americans. We reject the ideology of globalism, and we embrace the doctrine of patriotism."

Trump's rejection of "global bureaucracy" was a key point that Colbert jumped on in his monologue, pointing out the apparent absurdity of the president's nationalistic address.

"So Trump appeared before the United Nations to reject the premise of nations uniting," Colbert said. "Congratulations to Mike and Diane on their wedding, we believe the institution of marriage is a sham. We reject the ideology of monogamy. Diane, when Mike gets fat, call me."

Colbert also reached way back through Trump's 2016 campaign to show different instances of Trump telling people that the rest of the world was "laughing at the United States," something he would change once he got into the Oval Office. “So, how’s that going?” The Late Show tweeted out in response.

As long as Trump makes public appearances, it's almost a sure thing that Colbert will be trailing behind, waiting to leap on the next misstep.