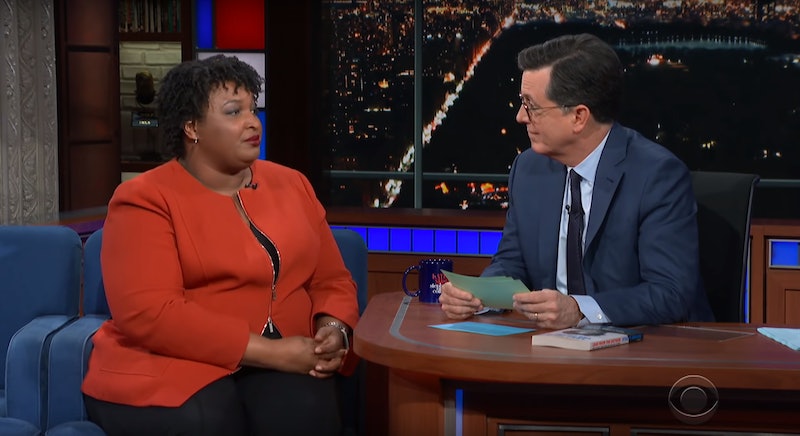 The Late Show With Stephen Colbert/CBS

Sex plus politics usually equals scandal — but not always. On Wednesday night, Stephen Colbert explored this boundary when he spoke to Stacey Abrams, the former Democratic nominee in Georgia's race for governor. Colbert read excerpts from Stacey Abrams' romance novel (some of which he said were NSFW), as she requested that people only read her books in the privacy of their homes.

The first part of their interview didn't cover anything out of the ordinary: Abrams' recently published book, Lead from the Outside; her experience running for governor of Georgia and her belief that she lost due to voter suppression; and finally, the question of whether she will run for president.

"There is absolutely no news I would like to make this evening," Abrams responded when Colbert asked if she was willing to publicly announce a decision about 2020.

The conversation then turned to her past work. "You're also a retired romance novelist," Colbert said.

Colbert then mentioned Abrams' pseudonym, Selena Montgomery, and Abrams explained that she'd chosen not to write under her own name because her editors thought her previously published work — that is, her masters thesis on tax code — wasn't sexy enough.

"It would have been like reading romance by Alan Greenspan," Abrams said. When Colbert told his guest that he had an excerpt from one of her novels, Abrams' response was quick.

"These had to be cleared with standards and practices of CBS," Colbert said, Abrams laughing next to him. "And there's some of this they said I can't read. So, I mean, if you're going to write a romance novel, make it a bodice-ripper."

Colbert offered to let Abrams choose which excerpt he read, but she demurred.

"I don't want you to read any of these," Abrams said. "I want people to read them in the quiet of their homes."

Her host was undaunted, however, landing on an excerpt from her novel Reckless and proceeding despite her protestations.

"Do you want to read it instead of me?" Colbert asked.

“'Softly, inexorably, he tested the contours of her lips, the damp heat urging him inside',” Colbert began reading. “'Reaching for Patience, Luke sank down into the chair she’d abandoned and settled her across his lap. Her eyes fluttered open, her fingers clutched at his shoulders. When she tugged him closer, Patience fled.'”

"It was a really good kiss," Abrams said after Colbert had stopped reading.

“Is there any of that in here?" Colbert said, motioning to Abrams' new politically-focused book. "Because then I understand why it would be a bestseller.”

However, it seems that Abrams has moved away from her past as a romance novelist. Even though she's said it's unlikely that she'll run for president this time around, there are plenty of ways you can keep up with her in the meantime. After all, many of Abrams' romance novels are still available for purchase — and Reckless is just one of many.