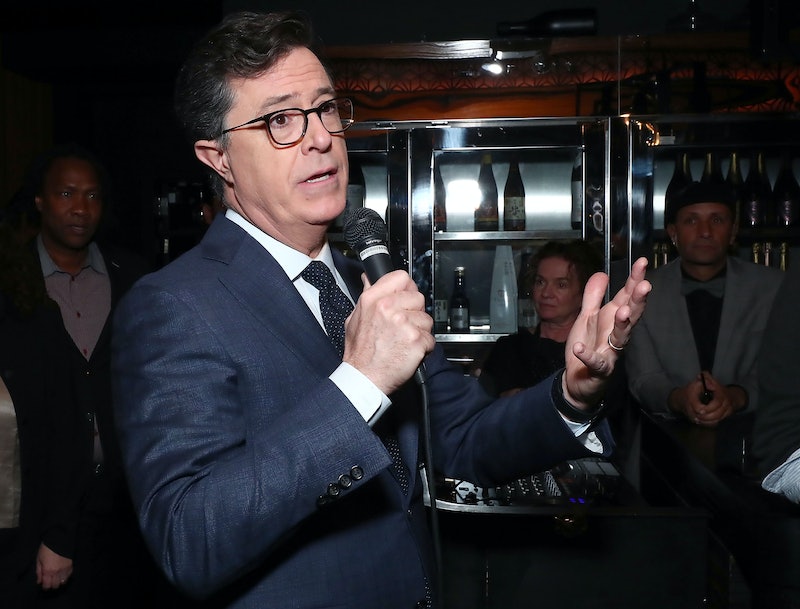 Given the Monday off to weigh the state of race relations in the country, you've surely read president-elect Donald Trump's Twitter attacks on the civil rights icon Rep. John Lewis. Trump accused him of representing a "crime infested" district in Atlanta (not true) and being "all talk, talk, talk — no action or results." All because Lewis dared to question the legitimacy of the election results. Well, Lewis may be above any hilarious comebacks, but luckily late-night television is not. Stephen Colbert put Trump's Lewis attack into perspective with one awesome analogy.

On Monday's episode of The Late Show, Colbert caught the audience up to speed on the controversy and added his own two cents on the matter. "Yes, well, John Lewis is all 'talk, talk, talk.' Unlike a real leader like Trump who’s all tweet, tweet, tweet," Colbert said to an uproar from the audience. But even that wasn't the best part of the segment.

The host used another holiday as an analogy. "So Trump spent the Martin Luther King weekend attacking a civil rights leader who marched and was beaten with Dr. King. What’s he going to do on Easter?" Colbert asked, before going on to answer his own question in the form of a possible tweet from the president-elect:

Loser Jesus dead for 3 days and then we’re supposed to believe he just wakes up? Fake news. I like gods who don’t die. Where’s the rebirth certificate?

Colbert, of course, hasn't shied away from making fun of Trump. It was just last Monday that the late-night host covered a weekend Twitter attack by the president-elect. That time, Meryl Streep was in his crosshairs following her Golden Globes speech (in which she criticized Trump's mocking of a reporter with disabilities).

Colbert's take was once again hilarious. "Of course, the President-elect Trump was too focused on defeating ISIS and creating jobs to pick a fight with a celebrity," he joked before defending Streep:

Wait a second, I'm sorry, what? What? What did you just say? Meryl Streep, overrated? Have you seen Sophie’s Choice? Have you seen The French Lieutenant’s Woman? Have you seen that one with the dead people, that she’s even funny in that one? Look, Mr. Trump. You can refuse to release your taxes. You can call to ban an entire religion. You can play footsie with a dictator. But calling Meryl Streep overrated? No! No! Too far!

The Trump presidency may be bad for a lot of things, but it will be good for late-night television. The possible jokes are endless, and every Monday you're sure to have fresh material from Twitter.