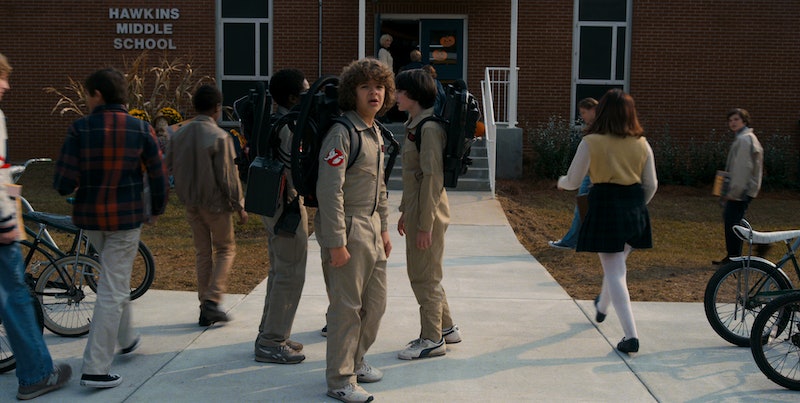 If you feel as if Season 2 of Stranger Things ended on a much more conclusive note than Season 1, the co-creators of the show succeeded. Spoilers ahead! On the Beyond Stranger Things after show, the Duffer brothers talked about purposely not starting their characters on new journeys in the final moments of the season finale, as they did in Season 1. One thing that's for sure is that the Shadow Monster (or the Mind Flayer) is still alive in the Upside Down and very interested in what's happening in the real world, where our faves reside. So no matter where the story goes from here, it seems like working out some theories about the Stranger Things Mind Flayer is probably the best way to spend your time waiting for Season 3. That thing is definitely going to be involved.

On Beyond Stranger Things, Ross Duffer explained to host Jim Rash why the shadowy Mind Flayer was chosen to succeed the Demogorgon as the prime Stranger Things threat. "What would something from this other world be that was actually sentient?" he asked. "And also we talked about sustaining this story, we talked about Voldemort. You need a threat that wasn’t just a shark. You need a threat that has plans and goals and thoughts."

So while the Demogorgons' directive is just to keep moving and eating, the Mind Flayer has bigger ideas. Like Tom Riddle, even. It's not made clear in Season 2 exactly what those ideas are, except to "kill," as Will translates. But Duffer's comments indicate that there is a larger motive, perhaps to merge the Upside Down and the real world, once and for all.

Matt Duffer added that this particular monster is "not something that you can understand" and representng "the lovecraftian approach to horror." Its appearance ups the stakes for the series. "It’s something from another dimension were you don’t understand what it’s intentions are," he said. "It’s beyond comprehension. We love the idea of a hive mind thing, that it connected everything."

That means that Will's possession by the Shadow Monster "virus" could just be the beginning. It's possible that in a new season, the virus would spread through multiple humans, should the monster be able to lure more victims to be tangled in its vines. And that could up the casualty count. On the after show, executive producer Shawn Levy let it slip that what he called "Evil Will" was initially supposed to kill Bob during their conversation in the car about bullies. (DARK.) So the Mind Flayer could use humans not just to be its eyes and ears in the real world, but also to take out as many opponents as possible.

There's also the matter of the void, that place where Mike and Eleven could hear each other, despite their physical distance. If the Mind Flayer figures out how to get into the void and back out the other side, it wouldn't need a human conduit. In order to explain the void and the concept of the multiverse, Beyond Stranger Things brought in — who else — Bill Nye. He said:

"We all love the idea of the multiverse…there’s two questions that we all ask. The first is, 'are we alone in the universe?' And if it turns out that in 200 billion stars, two times 10 to the eleventh stars, and that’s in our galaxy. And then that times as many galaxies... People, that’s a lot of galaxies. If it turns out we’re the only living thing that’s sitting and thinking about this, that is really troubling and creepy… But fortunately, the Upside Down is out there, it turns out perhaps there are these bubbles of universe which we now are calling multiverses, also expanding somehow at the same time. And is it possible that there are areas like this where the multiverse intersects?"

And voila — that's the void. If the Mind Flayer gets in there, Hawkins is definitely in trouble again.

The Duffers also had some bad news for Noah Schnapp and Millie Bobby Brown about their characters. The Shadow Monster is furious at Eleven for closing its gate. And Will's connection may not be completely severed. Whether the monster is targeting one or both of them, it makes sense that it's hovering over the school in the final seconds of Season 3.

Will the Mind Flayer send more minions into Hawkins? Will it take will again or choose another victim? And even with her immense powers, will Eleven be able to defeat a being like this that's actually thinking? For those answers and more, you'll just have to hang tight until Stranger Things Season 3.

More like this
Caleb McLaughlin Details Racism From 'Stranger Things' Fans
By Radhika Menon
Kate Bush Revealed The Real Meaning Behind 'Running Up That Hill' Lyrics
By Darshita Goyal
Nicola Coughlan Shared A Lady Whistledown Excerpt From ‘Bridgerton’ Season 3
By Grace Wehniainen, Alyssa Lapid and Sam Ramsden
Glenda Cleveland Died 2 Decades After Trying To Turn In Neighbor Jeffery Dahmer
By Brad Witter
Get Even More From Bustle — Sign Up For The Newsletter