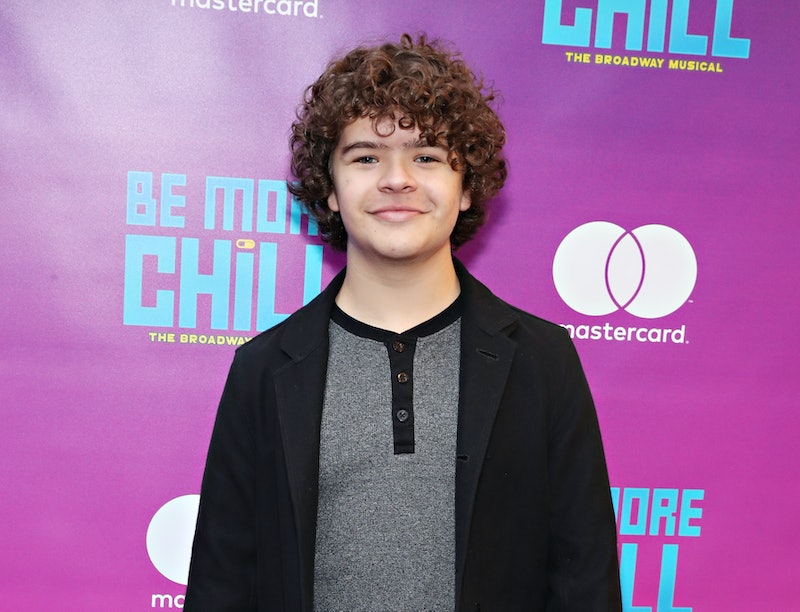 As it turns out, school dances are a source of great fun when Demogorgons aren't lurking in the shadows. Stranger Things star Gaten Matarazzo recently shared his junior prom pictures, and the snapshots are almost as endearing as Jim Hopper's dad dance. The 16-year-old actor, who stars as the lovable Dustin Henderson on Netflix’s hit series Stranger Things, took to social media over the weekend to post junior prom pics featuring his girlfriend, Lizzy Yu. Matarazzo captioned the photos, “Junior prom with my best friends and the most beautiful girlfriend ever.”

In the first Instagram photo, Matarazzo dons a snazzy plum tux with a rose pinned at the lapel. Meanwhile, Yu dons a stunning white and gold dress with embellishments; the duo are in full embrace. Ah, young love. The young actor also shared photos with his friends in other accompanying snapshots.

In a separate social media post, Yu shared some sweet candid shots of the couple sharing a kiss. She simply captioned the Instagram photos, "My Love Jr. Prom 2019." According to her Instagram bio, Yu appears to be an aspiring actress who performs with the Pinelands Thespians. Matarazzo burst into the scene with his role as Dustin in Netflix's hit series Stranger Things. The hit Netflix series follows a group of friends whose lives are turned upside down (pun intended) following the disappearance of one of their own. Set against the backdrop of a small town in Indiana during the '80s, the series garnered a cult-classic following its July 2016 premiere.

On New Year's Eve, Netflix announced that a third season of Stranger Things would be returning to the streaming giant on July 4 of this year. In the first full-length trailer released in March, our favorite crew from Hawkins, Indiana are immersed in an '80s summer against the musical backdrop of The Who's "Baba O'Riley" — where we see Will grappling with the aftermath of Season 2, Eleven and Max dancing around in a room, and Steve and Dustin bonding at the mall. At the end of the jam-packed trailer, another terrifying creature materializes, proving that the end is simply not near for our gang.

As Stranger Things fans will recall, the second season of the series ended with the departure of the creature from Will’s body, as well as Eleven’s successful (but grueling) closure of the portal to the other world. During the Snow Ball at Hawkins Middle School towards the end of the episode, fans are then exposed to a creature that still lurks within the Upside Down while the kids dance the night away.

Considering how taxing it must have been to confront a malicious Demogorgon — as well as grappling with Mews' untimely fate in the hands of Dart — we're just so glad that Matarazzo had what appeared to be a successful school dance with his girlfriend and friends. Assuming no terrifying creatures showed up, because a Mind Flayer-free dance with his classmates is what Dustin (and he's wonderful portrayer) deserves.