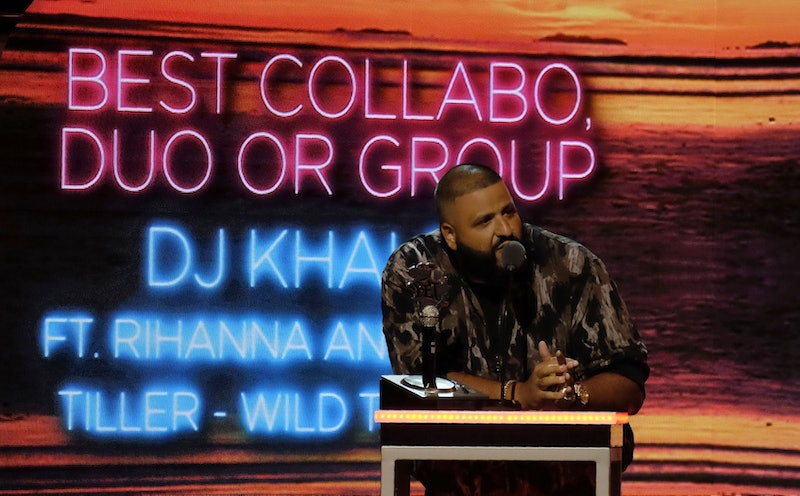 It's time for hip hop to take center stage on the awards show circuit. The 2017 Hip Hop Awards air Tuesday, Oct. 10 at 8 p.m. ET on BET. It's a night dedicated to focusing on the achievements of hip hop artists from the long respected stars to the new, emerging talent. While many award shows include hip hop artists in a category, the Hip Hop Awards is about letting hip hop artists take the spotlight. So, if you're a fan of music genre, this isn't an award show you'll want to miss. If you have BET, tune in. If you don't, here are some options of how to stream the 2017 BET Hip Hop Awards online.

According to BET's official Hip Hop Awards site, there are many performers set to take the stage including Rick Ross, Cardi B, host DJ Khalid and more. In an official press release from BET, host DJ Khalid said of the show:

"I am so excited to host the BET Hip Hop Awards for a second year. This is such an iconic show that highlights the hustle of hip hop artists in the industry. It is a huge honor to be a part of a night that pays homage to some of the greatest talent of our generation and I’m looking forward to the amazing performances and tributes."

Here are all the ways to stream or keep up with the show so you don't miss a single moment.

BET has a streaming option on its website, though you must have a cable login in order to access it. It's a great option for those with cable access that want to watch on their computer elsewhere.

The BET Now app offers streaming access to the show on your phone or tablet. Similar to the website streaming, a cable login is necessary.

While this option doesn't allow you to stream the full show, it will give you an inside look to the show's events. Check out the green carpet photos as well as backstage performances in the "Instabooth."

While following on social media isn't the same as watching the show, it is a good way to keep up with the exciting moments. The Hip Hop Awards have an official twitter where you can likely expect tweets about big moments. The hashtag #HipHopAwards will also most likely be trending during the show and be full of content as well.

There is already chatter about the show on social media, including previews of a much anticipated freestyle from Eminem. DJ Khaled teased the moment on his Twitter account.

This is just one of the many moments fans can look forward to on Tuesday night. According to The Daily Beast, the award show will also get fairly political. The magazine quotes rapper Bre-Z saying, "There are powerful messages being spread. As artist, as creators, whatever we say go. We move the culture, we curate the culture, so you know if we say no, everybody else is saying no."

According to the magazine, the award show, which is pre-taped, will address the current heated political state of the country. So, you can tune in for the musical performances, political statements, or just to watch your favorite artist (hopefully) get the recognition you think they deserve.

You may not have been able to watch from the crowd, but you can keep up with the excitement from anywhere as long as you have a computer or phone. Basically, it's impossible to be the person at work tomorrow who doesn't know what happened on TV last night.

More like this
Jason Derulo Is Launching A New Singing Show In The UK
By Maxine Harrison
Everything To Know About Taylor Swift’s 10th Studio Album, 'Midnights'
By Grace Wehniainen and Jake Viswanath
Is Dua Lipa Dating Trevor Noah? New Photos Show Them Kissing & Hugging
By Brian Anthony Hernandez and Martha Sorren
Two UK Cities Are Now In The Running To Host Eurovision 2023
By Sam Ramsden and Rachel Mantock
Get Even More From Bustle — Sign Up For The Newsletter