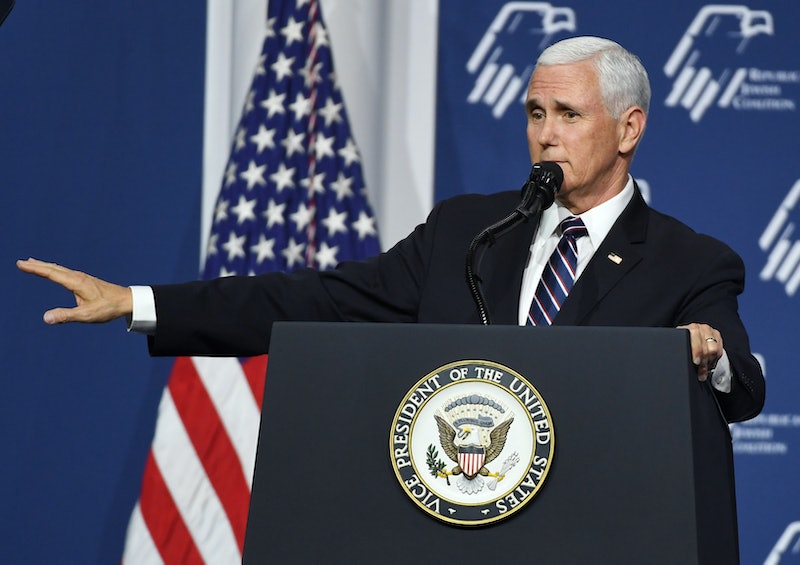 The vice president has given plenty of speeches throughout his life, but one upcoming speech is causing a stir in his home state. Students are protesting Mike Pence's upcoming commencement speech at Taylor University, an evangelical institution in Indiana, Newsweek reported. In fact, one Taylor alum has gone so far as to create a petition, which has already received over a thousand signatures.

Mr. Pence has been a good friend to the University over many years, and is a Christian brother whose life and values have exemplified what we strive to instill in our graduates. We welcome the Vice President and his wife, Karen Pence, to this 173-year-old premier institution of Christian higher education, and thank them for their love and service for our nation, our state, and our institution.

However, a petition started on Change.org shows that at least 1,000 people don't want the event to take place. The petition was created by Alex Hoekstra, an alum who went to Taylor from 2003 to 2007. It reads in part:

Inviting Vice President Pence to Taylor University and giving him a coveted platform for his political views makes our alumni, faculty, staff and current students complicit in the Trump-Pence Administration's policies, which we believe are not consistent with the Christian ethic of love we hold dear.

In addition to encouraging any and all people to not only sign the petition but to add comment, the petition also provides a list of "TU Contacts." This includes the contact information for Haines, as well as a number of other administrative officials, student organizations, and donors.

According to Indy Star, Taylor University is a private, Christian liberal arts school with a student body of about 1,200. The ceremony is set to take place on May 18 — and if Pence does end up giving the speech, it will be the first time he gives a commencement speech at an Indiana college since 2017, per Indy Star, when he spoke at Notre Dame's graduation. At that event, Pence faced a similar kind of controversy, when a group of students walked out of the ceremony in protest.

Per The New York Times, the protest began right when Pence started his remarks. About 100 students walked out, The Times reported. One of those protesters, a graduate student named Luis Miranda, explained to the publication, "Of course we welcome and support free speech on campus. But commencement is not a moment for academic exchange or political dialogue. It’s a celebration of all of our hard work.”

He added, “I have family who are directly being affected by his policies, so I felt like I needed to stand up. And I think that’s what we all felt.”

Hoekstra, who created the Taylor University petition, seems to feel similarly to Miranda. In an interview with Newsweek, he said, "As an alumni of Taylor and as a gay man I’m pretty personally injured by the policies of the Trump/Pence administration and I know that a lot of alumni who identify as other minority groups are personally affected by the Trump/Pence administration."