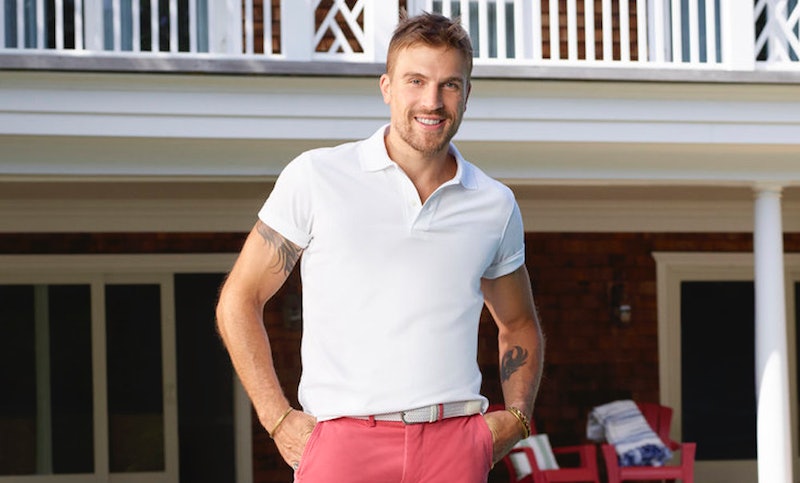 The Bravo bio for new Summer House star Luke Gulbranson calls him a "jack of all trades" and that couldn't be more accurate. Luke's Instagram shows the Summer House star's various hobbies, jobs, and passions — and he's got a lot of them. Now he can add reality star to his already lengthy resume as he joins Summer House for Season 4, which premieres on Feb. 5 on Bravo.

Luke may be new to the series, but he's no stranger to carefree summers in the countryside, as he has a lake house he usually retreats to in the warmer months, per his Instagram. According to his Bravo bio, he's also no stranger to the Summer House locale, having lived in New York for 15 years after moving out of Minnesota.

His bio gives a brief synopsis of everything Luke is all about. Among his interests are modeling, nature, hockey, crafting, motorcycles, open space, Minnesota, New York, and more — like liking women who already have boyfriends as he mentioned in a clip from the show. If his bio didn't tell you all that, though, one quick glance at his Instagram could. Luke is nothing if not consistent about his passions online.

According to his IG bio, Luke is a hockey coach and instructor who hits the ice whenever he can.

He Lives In New York, But He Cheers For Minnesota Sports

"Feels so good to be outta NYC for a bit and surrounded by my fellow Minnesotans," he captioned this photo at a Vikings game.

His IMDB page only lists a couple of roles (including playing a model on Last Week Tonight), but he's been dedicated to the acting game for years nonetheless.

He Writes Music And Plays Guitar

This man has so many hobbies.

He's been on billboards, in magazines, and more.

He Knows How To Do Summer Right

With a private summer lake house at his disposal, he didn't really even need to go on Summer House for the vacation of it all. Of course, he's gonna get the clout from the show, which his lake house alone can't give him.

He Makes His Own Jewelry & Clothing

Luke is the owner and designer for R_Co, a clothing and jewelry line. He even makes the rings and bracelets himself.

With so many side hustles and passions, it's a wonder Luke even had time to film Summer House. It'll be interesting to see how he gets along with some of the Southern Charm guests this season like Shep Rose, Austin Kroll, and Craig Conover who all infamously have struggled to get their own careers in gear. Maybe he can teach them a thing or two.

More like this
Kourtney Kardashian Claps Back At Pregnancy Speculation On Instagram
By Jake Viswanath
What’s New On Netflix: Ana De Armas’ 'Blonde' & A Nick Kroll Special
By Arya Roshanian
Where Is Armie Hammer’s Ex-Wife Elizabeth Chambers Now After 'House Of Hammer'?
By Grace Wehniainen and Radhika Menon
'The Bachelor's Peter Weber & Kelley Flanagan Are Reportedly Back Together
By Grace Wehniainen
Get Even More From Bustle — Sign Up For The Newsletter