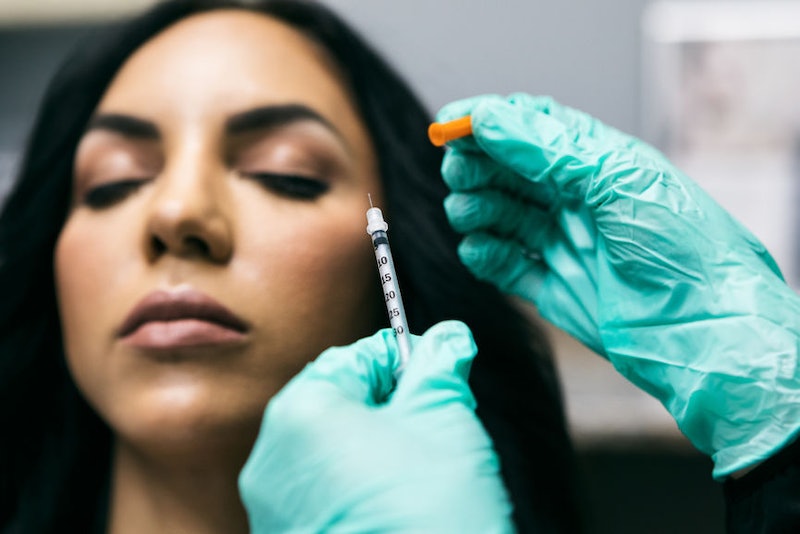 In August 2018, Superdrug announced a new addition to its beauty department. Botox and dermal filler were introduced to the brand's flagship London store as part of a trial that could see the service rolled out across the UK. However, after criticism from doctors, Superdrug are adding mental health checks to its Skin Renew Service.

After the initial launch of the new service (which offers appointments starting at £99), doctors warned that botox and dermal fillers are not "casual beauty treatments," and should not be treated as such, the BBC reports. The medical director of NHS England, Professor Stephen Powis, wrote to Superdrug to express his concerns about offering such treatments in a high street store. According to the BBC, Powis said:

"Pressures on young people's mental health are greater than they ever have been, with families and the health service too often left to pick up the pieces. The lack of tough checks on cosmetic surgery means that the public is dependent on businesses taking voluntary steps to get their house in order, leaving people avoidably exposed to dangerous practices."

Superdrug did enforce certain rules before implementing the service in August. Only people aged 25 and over are allowed to have the treatment, the BBC reports, and they must undergo an hour-long consultation beforehand. Part of this consultation is a mental health assessment. However, despite these assurances, Professor Powis still had some concerns, namely that the mental health part of the consultation should be more rigorous.

In response to these concerns, the BBC reports, Superdrug has said: "We remain fully committed to including recommended protections for mental health. We met with the NHS to ensure we have the highest safety standards and quality of patient care."

According to the Guardian, Superdrug also said: “Following a productive meeting with the NHS, and as part of the ongoing development of our Skin Review service, we have added additional questioning specific to body dysmorphic disorder, in line with NHS recommendations. These inclusions far exceed current standards.”

Body dysmorphic disorder (BDD) refers to condition in which a person will spend a considerable amount of time worrying about parts of their appearance. These worries can quickly turn into obsessions, the mental-health charity Mind states, causing feelings of depression and anxiety as well as varying degrees of debilitation in everyday life. According to the BDD Foundation, the disorder is thought to affect around two percent of the population. The foundation's website also states: "In the West, [BDD] is equally common in men and women although milder BDD may be more common in women."

Superdrug's new questionnaire will ask patients about their anxiety levels in relation to certain parts of their body, along with how often they look at that particular body part, Metro reports. It will also examine other signs of distress. If the nurse feels that someone is showing signs of BDD or another mental health issue, they can advise the patient to visit their GP or seek support from mental health charity Mind. A 14-day cooling off period between the consultation and the actual treatment will also be implemented.

This is a crucial step, especially when you consider that fewer than 10 percent of people with BDD are satisfied with the outcome of cosmetic procedures, according to Kitty Wallace, a BDD Foundation trustee. Wallace told the BBC:

"It is important that these measures are in place to protect such individuals from potentially damaging and unnecessary procedures. Although their anxiety might reduce temporarily, they will often find themselves fixating on another part of their body that they want to change. We commend that Superdrug will be screening for the disorder, and referring people who are positive to their GP and Mind."