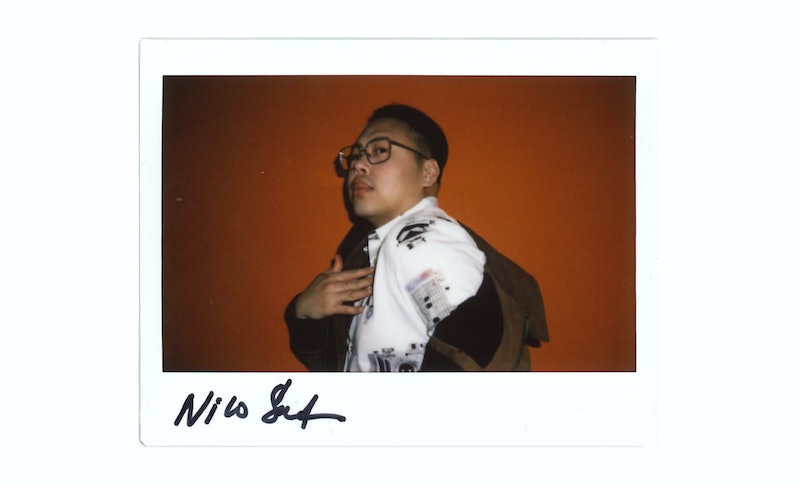 When celebrities hang out with Bustle editors, we want to give them the chance to leave their mark. Literally. So we hand them a pen, a piece of paper, a few questions, and ask them to get creative. The rest is up to them. This time, Superstore star Nico Santos is leaving his mark in the Bustle Booth.

Nico Santos has only been acting professionally a handful of years but he's already got a roster of hilarious, scene-stealing characters under his belt. After winning fans over as Mateo, the overachieving, hyper-competitive Cloud 9 employee hiding his undocumented status, on the NBC sitcom Superstore, he became one of the breakout stars of the stacked cast of Crazy Rich Asians playing Oliver T'sien, the "rainbow sheep" of the crazy rich Young family. As a queer Asian man himself, Santos is keenly aware of the importance of finally bringing characters who look like him to screens everywhere, big and small, and that importance means he's not worried about being pigeonholed into those roles in the future.

"I just never saw myself on screen any time growing up," Santos tells Bustle, adding, "I don’t think a character like Mateo would have existed even five years ago." And that's in part why the actor says he wants to continue playing characters that look like him for as long as he can.

Though it's easy to think that this determination might back Santos into a corner professionally, he disagrees. "Some people have said like, ‘Aren’t you afraid of being typecast?’ and I’m honestly not," he explains. "I feel like there’s not enough representation out there so I’d much rather play parts that look like me and sound like me because there are enough straight, white characters out there."

In fact, Santos points out that just because the characters he has become famous for are queer and Asian, that doesn't mean they're the same. "Those are the only common denominators between the characters," he says. "They have different motivations, different wants, different needs, and for me, it’s just important to show that queer people and Asian people, we belong in these spaces and we have as much variety as the default setting of straight people."

And, just like "straight white people," these characters aren't always defined by their ethnic identity. In fact, one of the things that Santos enjoys most about Superstore is that despite Mateo dealing with things like his immigration status (he discovered he was undocumented in Season 2), that's not the only element of the character the show focuses on. "You live your life and sometimes your identity is really being affected by everything around you and sometimes it’s a thing that sort of blends into the background," Santos says, "and that’s the thing that I love about Mateo so much."

If you too, love Mateo, check out Santos' hilarious answers to the Bustle booth questionnaire below.

More like this
'Grey's Anatomy's New Intern Got Advice From Dr. Bailey Herself
By Grace Wehniainen
On 'The Handmaid’s Tale,' Christine Ko Fights Back
By Gretchen Smail
Netflix Reveals First Look At Wednesday In The 'Addams Family' Spinoff Series
By Bustle Editors
The Bling Ring's Alexis Neiers Has Come A Long Way Since Her 'Pretty Wild' Days
By Sophie McEvoy and Arya Roshanian
Get Even More From Bustle — Sign Up For The Newsletter