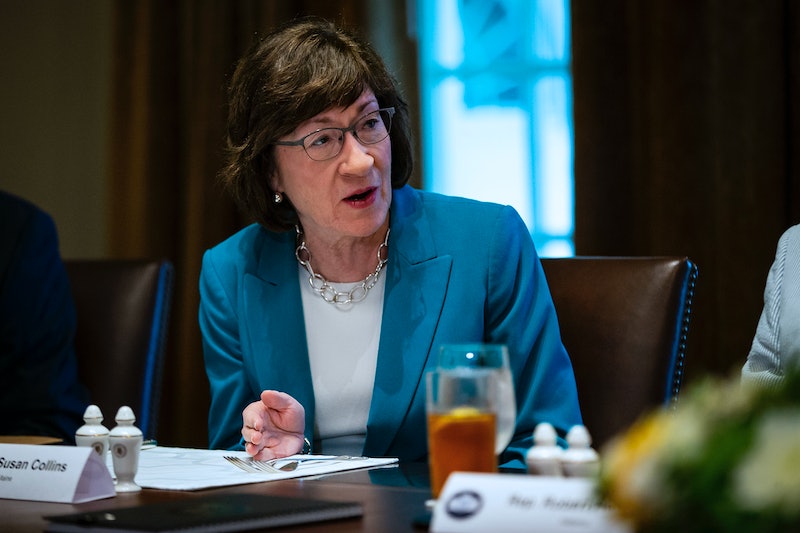 According to a Tuesday report by The New York Times, Sen. Susan Collins received threats over her potential Brett Kavanaugh vote, with many urging her against voting to confirm Trump's SCOTUS nominee. Times reporters Sheryl Gay Stolberg, Nicholas Fandos, and Catie Edmondson reported that the threats came in the form of a "barrage of calls" where some contained profanity.

A spokeswoman for Collins' office, Annie Clark, told The Times that the senator's office received a letter and "multiple" voice mails. One of them reportedly came from a caller that wished rape on a 25-year-old female staff member for Collins.

The pressure building on the Maine Republican senator in recent weeks has been well documented. Brian Fallon, the executive director of the liberal advocacy organization Demand Justice, told The Times, "The intensity on Collins and Murkowski is rising. But I think we have an even better shot of making them feel the heat if more Democrats would come out and express opposition, and create a dynamic like there was on health care, where it was clear that Collins and Murkowski would be the deciders."

Critics have said that if Kavanaugh is confirmed to the Supreme Court, conditions for women's reproductive health care and access to safe and legal abortion services could take a blow. While some unnamed critics have resorted to reportedly "vulgar" calls and threats, per The Times, there have also been activists protesting at Collins' office by reading their own experiences related to abortion.

The Times report comes shortly after Collins held a session with Kavanaugh in August. Collins called her encounter with Kavanaugh "excellent," noting that he said "he agreed with what Justice John Roberts said at his nomination hearing, in which he said [Roe v. Wade] was settled law."

The Maine senator's description of the session elicited criticism from progressive activists. It even seemed to contradict New York Democrat Sen. Chuck Schumer's evaluation of Kavanaugh's stance on the landmark decision that legalized abortion in 1973.

The New York senator said of Kavanaugh, "I asked Judge Kavanaugh if he agreed that Roe v. Wade and Casey v. Planned Parenthood were correctly decided. He would not say 'yes.' That should send shivers down the spine of any American who believes in reproductive freedom for women."

In other cases, local activist groups like Maine's People Alliance and Mainers for Accountable Leadership have raised $1 million, according to The Times. The money could go to Collins — provided she opposes Kavanaugh. If she supports the SCOTUS nominee, the sum would go to a Democrat running against her in 2020.

Activists justified the philosophy to The Times saying that they expect Collins to represent Mainers. Mainers for Accountable Leadership's director, Marie Follayttar Smith, said, "What else does Maine need to do? What else do Mainers need to say before they are listened to and represented?"

But it’s that kind of pressure that the Maine senator has rebuffed. Dubbing the $1 million sum "bribery," Collins said in a statement on Tuesday, "This quid pro quo fund-raising campaign appears to be the equivalent of an attempt to bribe me. Attempts at bribery or extortion will not influence my vote at all."