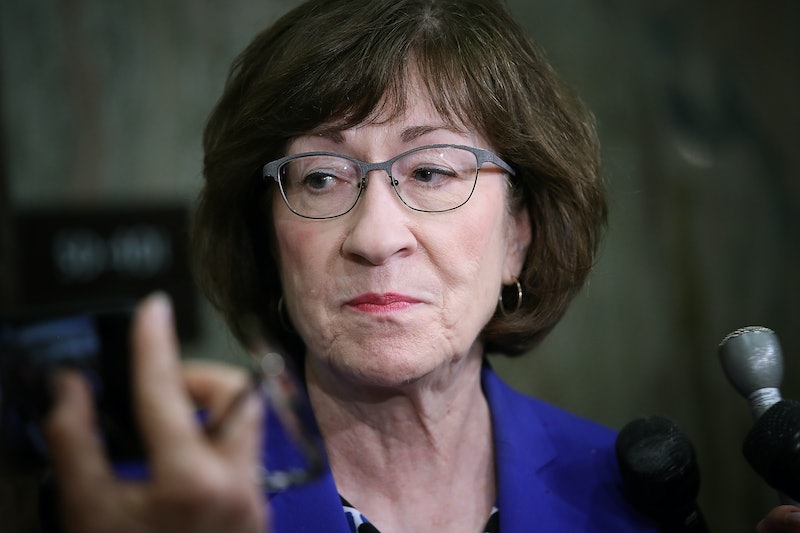 There might be a wrinkle in the Republican senators plan to push through the confirmation of Trump's latest Supreme Court nominee, Judge Brett Kavanaugh. Maine Sen. Susan Collins said the second Kavanaugh accuser should testify under oath, according to a report on Monday.

"I believe that the committee investigators should reach out to Deborah Ramirez to question her under oath about what she is alleging happened," Collins told reporters, according to The Hill.

Kavanaugh denies all allegations, most recently in a letter to Senate Judiciary Committee Chairman Chuck Grassley and Ranking Member Dianne Feinstein on Monday. He called the accusations made by Christine Blasey Ford and Deborah Ramirez "character assassinations."

"There are smears, pure and simple. And they debate our public discourse. But they are also a threat to any man or woman who wishes to serve our country," Kavanaugh wrote. "Such grotesque and obvious character assassinations — if allowed to succeed — will dissuade competent and good people of all political persuasions from service."

Collins said she didn't expect Ramirez to appear at the Senate Judiciary Committee hearing on Thursday where Ford is scheduled to testify. "No because there hasn’t even been an interview of her yet, and I think that needs to take place first," Collins said, according to The Hill.

Ramirez's accusation of sexual misconduct dates back to Kavanaugh's time as an undergraduate at Yale University. She told The New Yorker that Kavanaugh exposed his penis to her at a dorm party, forcing her to touch his penis without her consent as she pushed him away. "I remember a penis being in front of my face. I knew that’s not what I wanted, even in that state of mind," Ramirez told The New Yorker.

Ford first accused Kavanaugh of attempted rape in confidential letters to her congresswoman and senator in July. Ford later publicly attached her name to her accusation against Kavanaugh in a story by The Washington Post.

The White House has stood behind Kavanaugh since announcing his nomination, saying in a statement given to The New Yorker on Sunday:

The Hill reported that Collins has not taken a firm stance on voting for or against Kavanaugh's nomination. "I also am eager for the hearing to take place this Thursday and hear from Judge Kavanaugh and from Dr. Ford," she told reporters, according to The Hill.

Collins is not a member of the Senate Judiciary Committee.

Politico Capitol Bureau Chief John Bresnahan tweeted on Monday that Texas Sen. John Cornyn — who is a member of the committee — said that the Judiciary Committee could vote on Kavanaugh's nomination as early as Friday. That would mean, if a majority of the committee votes "yes" to recommend his nomination, it would be sent to the full Senate for a vote. Then, the votes of undecided senators like Collins would come into play.