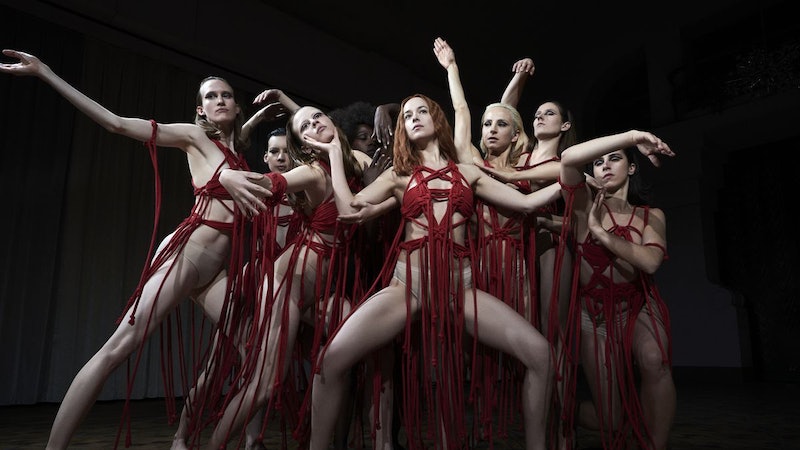 Spoilers about the end of Suspiria will follow. You’d be forgiven for assuming that a 2018 film starring multiple women who can be described as acting powerhouses and centering on a coven of witches parading as a dance company in Berlin would likely be a feminist masterpiece. The new Suspiria heralds an appreciation for an art form (dance) that’s often used as a means of pure objectification; despite the fact that the dancers are nearly nude or totally nude at times, the dance is treated as deadly serious, rather than as a sexual amuse-bouche. There are powerful witches, conspiring to hide their secret power from the world and occasionally using it to punish men who (mostly… maybe… probably?) deserve it. And there’s the presence of Tilda Swinton, who’s not necessarily known as a feminist icon, but who does make most women feel the need to worship at her impossibly talented feet. And yet, by the time the credits roll at the end of Suspiria, there is no overwhelming sense that the film has won a victory in the name of women.

There is no lesson in Suspiria. No moral hangs over your head in the hours after the film ends and its themes attempt to permeate your everyday life. The film is a vicious, bloody mystery — a haunting story with no moral ground to lay. And that is actually a truly remarkable and important gift.

Of course, in asserting that, I must first address the elephant in the room: Yes, this remake of the 1977 Italian cult classic of the same name was conceived of and created by men (Call Me By Your Name director Luca Guagadino helmed the film while David Kajganich wrote the screenplay, which deviates quite a bit from the original). And yes, this whole affair would feel far more satisfying if at least one of those roles was filled by a woman, but in taking in the film as one piece — a whole work crafted by the many voices (Swinton, Dakota Johnson, Chloe Moretz, and Mia Goth, included) that brought it into existence — the feat it accomplishes is still rather remarkable.

Let’s start with the truly shocking twist: The fact that our sweet, wide-eyed heroine, Susie Bannion (Johnson) turns out not to be a lamb being unknowingly led to slaughter by her mother surrogate — Swinton’s Madame Blanc who hopes to use her to revive the coven’s head witch, Helena Markos. She’s actually the most powerful witch in the film, and one who can call on Death herself to kill all who conspired to steal her seat of power. She is Mother Suspiriorum.

Before the bloody end, in which Death sends all of Susie’s opposition into gory, fatal combustion, it appears as if Susie is our possible moral center — she escapes a life of strict rules and restrictions to pursue her love of dance, fleeing her Mennonite mother, who’s seen in cutscenes saying awful things about how her child is an abomination and her greatest mistake. When Susie begins finally reveals her true self (in a scene in which the actor who plays Susie’s mother also plays Death, to boot) the lines of right and wrong are blurred. The mother is no longer completely wrong and Susie is no longer a wide-eyed dreamer in need of saving, but at the same time, the reveal makes no judgement on where Mother Suspiriorum’s character lies. She’s the bringer of bloody death to her enemies, a merciful ally to the women made to suffer by Helena Markos, and a proud beacon of womanhood (your eyes did not deceive you — she does open her heart to reveal a speaking vagina in her chest at the end of her coming out scene).

After the slaughter, Susie visits the unfortunate man who was stripped down naked and made to bear witness to the scene — Josef Klemperer (famously also played by Swinton) — to erase his memories of the wife he couldn’t save from the Nazis and everything he’d witnessed at the dance company-slash-coven, telling him that the coven doesn’t need his guilt. While it seems merciful, and even magnanimous at first, like much of the film, it starts to fray at the edges when it becomes clear that she’s left the man empty and hopeless, with no memory of anything important in his life. The morality is grayed yet again.

There doesn’t seems to be a lesson anywhere in the film, in fact. No shining beacon of hope. The closest we get is Sara, the dancer who recruits Susie Bannion to the coven company. She goes from drinking the Kool-Aid to attempting a failed one-woman investigation by the third act, but even she isn’t completely in the right, because as she says herself, the Markos Dance Company has been a haven for women, especially in the politically turbulent times in 1970s Berlin.

There also isn’t any clear moral high ground to the pain the witches inflict on men — they look for thin reasons to torture them (Josef didn’t do enough to save his wife from the Nazis and said women who told him about the witches were having “delusions”; the police they torture aren’t very good at their jobs, but mostly they’re a threat to the coven). From the humiliation bestowed on male victims to the unbearable, contortionist torture performed on the first dancer to oppose the coven in the film, to the fact that the coven is actively looking for a young, talented woman to sacrifice for their leader, many of the women in this film are brutal, violent, and vicious.

Some have clear purpose (Swinton’s Madame Blanc and Susie Bannion) and some are more flippant with their power (see: one witch who can be seen poking a hypnotized policeman’s penis with a hook and squealing gleefully in one particularly memorable scene). And yet, the whole endeavor feels less like an indictment or suggestion that women are inherently evil and thus capable of the atrocities seen in the film, and more like an exploration of the possibilities of a world in which every player, from power players to victims and pawns, are women. The film basically finds every possible shade of grey that emerges when a group of people are given a tiny stronghold of tenuous power in tumultuous times. There is no one answer or one proper reaction — there is only the mess that we’re left with at the end of this film.

And while women absolutely need narratives that unabashedly lift us up and send a strong, clear message — the Ruth Bader Ginsberg biopics and Captain Marvels of the world — it’s also incredibly important and legitimately revolutionary to deliver tales in which womanhood is just the playing field, not a label that determines one’s fate, worth, or morals. Within the walls of this Berlin dance company, everyone is a woman, everyone has a different motivation and code of conduct. It’s a hyper-violent, over-the-top representation of the reality of being a human — existing as we are in all our different lanes, not spending every waking moment living out the actions of a morality-defending superhero. Yes, Sara does eventually try to stop the witches, but she’s not special because of her gender. She doesn’t have moral clarity because she’s fighting for the freedom of other women or fighting with skills that only she possesses as a woman. She’s a scared human trying to maintain the privilege of being human for as long as she can, in a world that forever feels as if the ground is shifting beneath her (sometimes, it actually is). The same goes for Susie, Madame Blanc, and just about every other woman fighting for some kind of power throughout the film.

And considering that stories like this have been made about men for decades, it’s actually a pretty big deal that, alongside the stories of feminist triumphs and unyielding heroines, women can now also see themselves in something as murky, grey, and undefined as the world of Suspiria, too.

More like this
What Is Mary J. Blige’s Net Worth? The 9-Time Grammy Winner Is Doing “Just Fine”
By Hugh McIntyre
Taylor Lautner Copped To Finding Jacob "A Little Annoying" In Twilight
By Stephanie Topacio Long
James Cameron May Come To Regret His 'Titanic' Door Experiment
By Stephanie Topacio Long
Kukulkan From 'Wakanda Forever' Has A Surprising Connection To Marvel History
By Grace Wehniainen
Get Even More From Bustle — Sign Up For The Newsletter
From hair trends to relationship advice, our daily newsletter has everything you need to sound like a person who’s on TikTok, even if you aren’t.