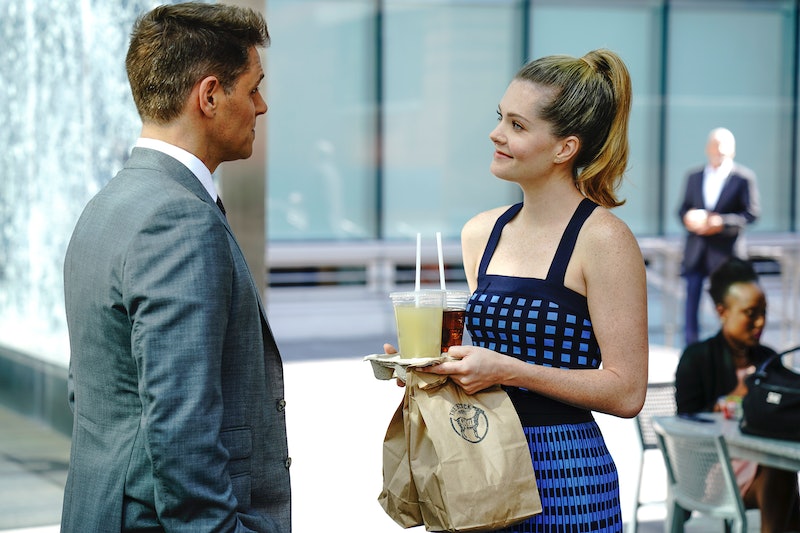 Spoilers ahead for Season 3, Episode 5 of The Bold Type. Grand romantic gestures have long been a rom-com staple: there was Patrick (Heath Ledger) serenading Kat (Julia Stiles) in front of the whole school in 10 Things I Hate About You; Llyod (John Cusack) playing he and Diane's (Ione Skye) song on a boombox below her window in Say Anything. They're big, special proclamations of love that have gone down in cinematic history — but rarely do we get to see what happens after the couple in question rides off into the sunset together. Not so with Sutton and Richard on The Bold Type.

In Season 2, Richard flew halfway around the world to tell Sutton she's the one for him, much like Big did for Carrie in Sex and the City's series finale 15 years ago. But in The Bold Type Season 3, we've gotten to see Sutton and Richard actually working on their relationship, rather than just cutting to the happy montage. The cards have been stacked against them from the start: because Richard is an executive at Scarlet and Sutton is a fashion assistant, they've both felt pressure to prove what they have is real, and not just Richard wanting to have a fling with a younger woman.

But Richard, in particular, has been letting other people's perceptions get to him. It's why he initially told Jacqueline he and Sutton were moving in together (before Sutton had even agreed to do so), and it's why in the May 7 episode, he's been talking to his friends about buying a house in Connecticut. He wants to show that he and Sutton have a serious relationship and are working toward building a future together — only he keeps neglecting to include Sutton in these conversations. Case in point: when he decides to throw a dinner party to introduce his friends to Sutton, he forwards her an email chain revealing he's been talking with a friend about house-hunting in the suburbs. This is news to Sutton, who's quite happy with her life in Manhattan, and isn't interested in moving.

Richard and Sutton are at completely different points in their lives. He's older, she's younger, and it makes sense that she wouldn't want to leave New York yet, or even at all. Richard, on the other hand, wants to have a family sooner than later, and Greenwich, Connecticut happens to be in a pretty great school district. Luckily, instead of staying quiet about it, Sutton brings up what she saw. They talk about it, they make up, and they move forward, with Richard vowing that he'll wait for her and won't make huge decisions about their future without her. Let's hope he sticks to it.

Both Richard and Sutton are used to being single and making their own decisions, so to have to incorporate another person in the planning process is an adjustment. Richard may have declared his love on the street in Paris, but words are easy. Actions and putting hard and compromise into a relationship? That stuff is really hard. And that's where Sutton and Richard are right now.

Meghann Fahy, who plays Sutton, told Hollywood Life that Sutton has to learn to balance what she wants with her relationship. "[Their breakup] was never about whether or not they loved each other. It was just about what she felt like she needed to focus on at that time," Fahy said." This means that now that Sutton and Richard are back together, they need to move forward as one cohesive unit — not as two separate people hoping the other person's needs and wants will just so happen to line up with theirs.

Even the most perfect-seeming relationships take a great deal of work to be successful, and rom-coms don't often show that. The fact that Sutton and Richard are in such different places in their lives mean they'll have to work that much more at things. It will be worth it in the end, but they need to put in the effort to communicate first.

More like this
Kaley Cuoco Was Set Up With Her New Boyfriend Tom Pelphrey By Her Manager
By Hugh McIntyre and Jake Viswanath
This House of the Dragon Character Will Create Another Scandal For Rhaenyra
By Kadin Burnett
Nicola Coughlan Shared A Lady Whistledown Excerpt From ‘Bridgerton’ Season 3
By Grace Wehniainen, Alyssa Lapid and Sam Ramsden
Devi Is Going To Meet A “Smoldering Bad Boy” In ‘Never Have I Ever’ Season 4
By Jack Irvin and Gabrielle Bondi
Get Even More From Bustle — Sign Up For The Newsletter