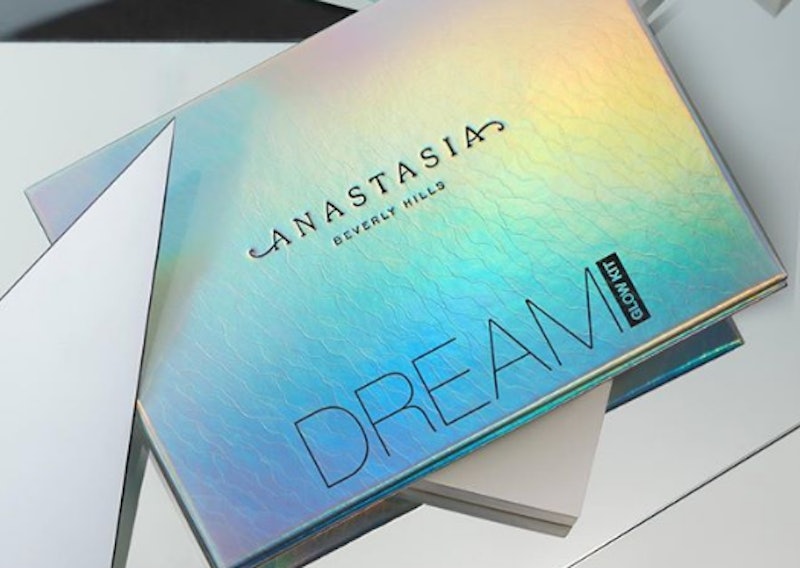 Fantasy, festival-ready, iridescent, makeup trends don't seem to be dying anytime soon. With the glow kit creators set to release a unicorn-esque bundle of illuminators, the proof is in the pudding. Swatches of Anastasia Beverly Hills' Dream Glow Kit are here, and they're everything you would expect from the brand known for fleeky highlighters.

Anastasia Beverly Hills may not be the originators of an unconventional, fairy-like glow, but the brand sure has a knack for creating products that achieve the look. Take the brand's popular Moonchild Glow Kit, for example, an instant hit that had makeup lovers praying to the beauty gods that the palette would be a permanent addition to the ABH family. Then there was the Aurora Glow Kit hype that soon followed, solidifying ABH's place as an otherworldly glow master. So when the brand hinted at releasing yet another whimsical highlighter kit, fans were already shook at just the mere thought of the new gem.

Causing a frenzy as they do best, the brand dropped a sneak peak of the dreamy kit before they even revealed its name. Now, the Dream Glow Kit is finally on the way, just in time for festival season and summer beauty slayage.

Launching on May 22, Dream will hit ABH's website with a bang. The fantasy set of lavender, mint, and pink illuminators will retail for $45, just a slight increase from the brand's usual $40 glow kit price tag.

Featuring a couple of more conventional golden shades amongst the bold hues, Dream does what many of the brands previous offbeat highlighter kits doesn't do. It combines unicorn trends with everyday highlighters, making for the ultimate glow kit that does it all.

Swatches of the kit in action will surely knock your socks off, as this is one pigmented palette.

Every single hue shimmers against the skin beautifully, so it's going to be hard to pick a favorite if you invite Dream into your beauty stash. "Wish" and "Sunshine" are the stunning golds that fall in line with more traditional highlighter hues. "Ethereal" and "Magic" are the pinkish-purple stunners that are absolute perfection. "Regal" is the ideal rose gold, looking oh so drool-worthy. Then there's "Unicorn", the ultimate dreamy shimmer standing out as the boldest hue in the entire kit.

Arm swatches are certainly worth losing your mind, but seeing the Dream kit dusted against the facade will come for your wallet. The iridescent hues look heavenly on a range of skin tones, proving this kit is more versatile than it initially appears.

If you were ever doubtful that dream wouldn't be any different than its whimsical predecessors, you can rest assured that it is in a lane of its own. Although it falls into a similar color family, swatch comparisons with Dream and Moonchild prove they are different enough.

So, it's totally worth tapping into your inner beauty junkie and snatching up the Dream Glow Kit. ABH fans are already planning to include it in their next makeup haul.

It's seriously the stuff unicorn dreams are made of, explaining why it appeals to makeup lovers that can't steer clear of pastel hues.

Naturally, there was a little backlash, though. With Dream looking so similar to Moonchild and Aurora, it let some ABH fans down.

Still, the Twitterverse was here for the new glow kit, as it would make the perfect, glitzy addition to any worthy highlighter stash.

Luckily you won't have to wait long before you can get claws on it, if Dream is catching your eye. Just be sure to stay tuned for its official launch, because it looks like highlighter-obsessed beauty lovers will be flocking to Anastasia's website in droves.