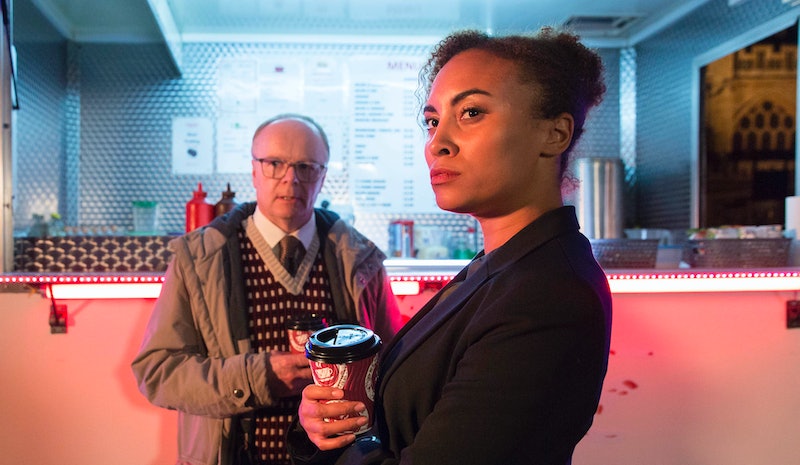 Crime and comedy are two genres that shouldn't work together, and yet they have done, time and time again. Actor Tala Gouveia, whose new ITV series McDonald & Dodds, calls the combination "terribly British." The series certainly harks back to quintessential British detective shows like Midsomer Murders, Miss Marple, and Vera, but with a distinctively modern twist. Gouveia plays the fiercely ambitious DCI Lauren McDonald, who is constantly seen referring to an iPad that she carries around her neck to quickly access data and evidence on the go. Technology plays a major role in finding evidence, which McDonald takes into her stride.

Transferred from policing the streets of South London to the more isolated city of Bath, McDonald is partnered with experienced but incompetent DS Dodds (played by Jason Watkins). “They’re such opposites,” Gouveia says. “They bring out the comedy in each other really well.”

The on-screen chemistry between Gouveia and Watkins is totally natural, and the humour seems to naturally occur whenever they’re together. “Both of us were always trying to look for the comedy in every scene,” despite a fair few of them focusing on, y’know, murder. “It’s always lovely to get the comedy in there,” Gouveia explains. “People love a lighthearted comedy [and] a murder mystery.”

While the comedic aspect of the show comes naturally to Gouveia, to really understand the nature of Lauren’s career she formed a bond with a former detective who was in the Met Police. “She’s incredible,” Gouveia says. “We talked about the police and her job, and I asked a few hypothetical questions about what it would be like if she moved to a town that wasn’t in London. She was like, ‘Oh God, I’d imagine it’d be boring’.”

Gouveia used these experiences to develop Lauren's personality, making for a much more believable portrayal. “I quite like that sometimes, to take people’s own experiences,” she explains. “Not just taking it from their own life, but also going, ‘What would you think if this happened to you with your life’ and taking that on board.”

The actor also highlights the importance of women in powerful positions through this role, especially as a woman in the police. “To be taken seriously, to be people’s boss, and how you talk to people and how you are perceived,” she says. “Especially if you’re ‘too loud’ or ‘too bossy’, all these words are still there, I think.” Lauren totally embraces her ambitious nature in McDonald & Dodds, much to the annoyance of her male superiors, and she gets the job done. She doesn’t let their negativity get to her in the slightest, and quite honestly it pushes her forward even more.

And when it comes to her relationship with Dodds, the way he’s sidelined by the force gives her the opportunity to prevent the discrimination she has faced in the past, which is brought up multiple times in the episode. “That was one of the things that drew me to take on the show. I think it’s just a lovely flip. It would be one thing if she were bossing around the two juniors, but it’s different having her with this older man that’s been in the industry for more years and should be more experienced.”

It remains to be seen whether McDonald & Dodds will continue beyond the two feature-length episodes, which Gouveia would happily return to, the actor wouldn’t mind dipping her toes into the world of fantasy. “Something epic, magical, and ethereal,” she says. “I think that’s the next thing. I’ve done my sci-fi and my detective, done a few comedy things, so it’s time for fantasy I think.”