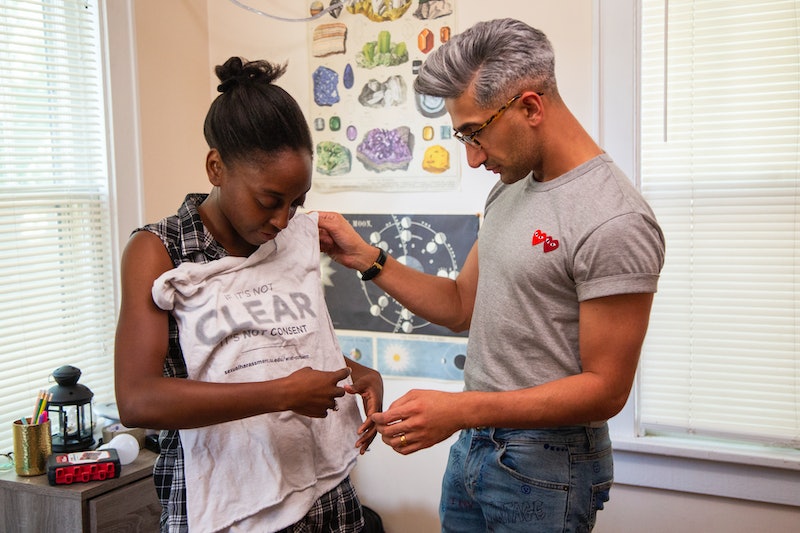 Can you believe? Queer Eye’s fashion expert is bringing his signature French tuck to a brand new Netflix series. In perhaps the best #fashun news: Fashion guru and TV personality Tan France will host a new Netflix fashion competition series titled Next In Fashion, coming soon to the streaming giant. Co-hosted with fashion designer and model Alexa Chung, Next In Fashion will follow 18 designers as they compete to become the next big name in fashion. The winner of the competition series will receive the grand prize of — drumroll, please — $250,000. Oh, and there’s also the opportunity to debut their collection with luxury retail brand Net-a-Porter.

While a premiere date has not yet been announced, the first season of Next In Fashion is slated to comprise of 10 episodes. Consisting of designers who have worked with major celebrities and brands, the contestants will square off in “challenges centering on a different trend or design style that has influenced the way the entire world dresses,” according to the press release obtained by Bustle. Next In Fashion will feature Elizabeth Stewart, celebrity stylist, and Eva Chen, fashion director at Instagram, in recurring guest judge roles. Additional guest judges are expected to be announced at a later date. And given the already-impressive roster, it wouldn’t be far off to anticipate some prominent names in fashion as guest judges.

Next In Fashion will mark the streaming service’s first original fashion competition series. For the series’ inaugural Instagram posts, Next In Fashion created sleek RSVP cards to match the theme of fashion shows. In one post, France and Chung hold up the invitation, which reads, “Netflix in Fashion requests the company of you at Netflix’s first fashion show.”

France became a celebrity almost overnight when Netflix hit series Queer Eye, a reboot of the 2003 Bravo series Queer Eye for the Straight Guy, premiered in 2018. France is the fashion expert, of course, and plays a key role in helping the show's "heroes" (aka subjects) find their sense of style. He might be best known for popularizing the "French tuck," a way of tucking in shirts that is so popular, even Oprah knows about it.

As for Chung, the designer is certainly no stranger to the world of TV. The media personality has starred in and hosted several series throughout her career for outlets such as Fuse News and MTV. She also had her own talk show, It's On with Alexa Chung, which aired on MTV for six months in 2009. She currently runs her own eponymous fashion line ALEXACHUNG, equipped with plenty ready-to-wear items.

Next In Fashion will be executive produced by Project Runway All Stars producer Yasmin Shackleton, as well as Robin Ashbrook and Adam Cooper. The competition series will mark France’s second project with the streaming service. And given that fact, here’s to hoping his Queer Eye co-stars feel welcome to stop by for cameos on the fashion competition series. It would be the Netflix crossover for the ages, henny.