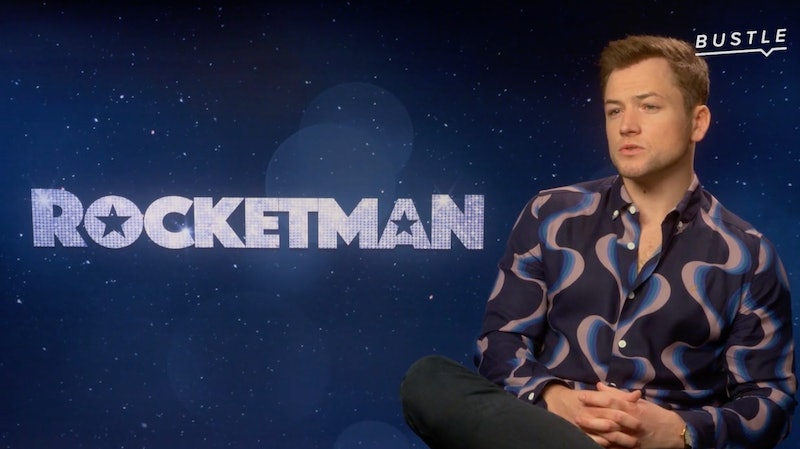 The upcoming biopic Rocketman, coming to theaters May 31, focuses on how shy pianist Reginald Dwight became stadium showman Elton John, surviving a hurricane of sex, drugs, and music to become a legend in his own right. It's the rare biopic where the subject of the film is not only still with us, but is arguably as popular as he's ever been. Paramount Pictures invited Bustle to the film's London press junket, where Movies Editor Sage Young sat down with the cast of Rocketman to talk about Elton John's long legacy, well beyond what the film shows, and how it influenced their performances in the film.

While the entire cast agrees John's music is the first thing that jumps to mind, his body of work is so diverse that everyone has a different favorite facet of the same career. For Bryce Dallas Howard, who plays Elton's mother Sheila, that means the sound of her childhood: The Lion King soundtrack. John wrote the music for the film alongside Tim Rice, and even sings on three hit tracks, including "Circle Of Life," "Can You Feel The Love Tonight," and "I Just Can't Wait To Be King." Richard Madden, who plays John's former manager and boyfriend John Reid, is in quiet awe of John, who he calls "an amazing performer who just writes hit after hit after hit!"

Taron Egerton, who plays the artist himself, says that John's "incredible music" is always top of mind. Though it must have been challenging for Egerton, who does all his own singing in the film, to live up to a legend, he did have a head start. NME notes that speaking on Beats 1, John said that Egerton's cover tune caught his attention a few years ago, when Egerton voiced an animated character who sang one of John's hits. “I’d heard him sing ‘I’m Still Standing’ on the Sing! soundtrack — I knew he could sing and I definitely wanted in this movie people to know that it wasn’t me singing. I didn’t want lip syncing," he said.

Speaking to Good Morning America, Madden noted Egerton's advantage, saying, "He has a beautiful voice, it's easier for him!" The actor also admitted he was intimidated having to cover Elton's work. "You feel so exposed when you're singing," he added.

Howard had to take on a more difficult aspect of that legend, embodying the dysfunctional relationship between John and his mother. In the clip, Howard says that talking to those who actually knew Sheila helped her research her role. "'Oh yes, she would say this to him a lot,' or 'Yes, this is what it was like' or 'Yeah, children were scared of her,'" she recalls hearing. "When I first read the script, I felt like [Sheila] was being vilified, and I just felt that was wrong. And the more I learned, the more I realized that actually, it was worse."

One thing the film got right, at least according to Egerton, was digging beneath the sequins. "Rather than just make the lazy observation that Elton's a diva, we seek to humanize and explore and explain that," he says. Key to that for him was the platonic romance between John and songwriting partner Bernie Taupin, played by Jamie Bell in the film. "We've seen a lot of bro movies," says Egerton, "and they're fun, but I think this is a slightly sweeter relationship".

Though the cast of Rocketman each have their own fondest memories of the star, John is still standing and adding on to that legacy every day.