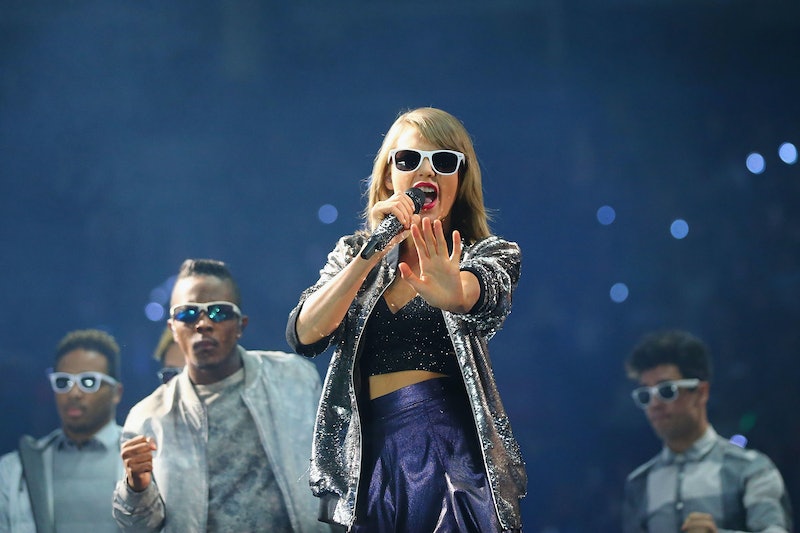 After a long two weeks of nonstop teasing, Taylor Swift finally unveiled her new single "ME!" on Friday, April 26. Swifties were pleasantly surprised to find out that Brendan Urie, of your favorite '00s band Panic! at the Disco, had collaborated with her on the song, and now they've performed together onstage too. Taylor Swift and Brendan Urie's 2019 BBMAs performance truly put the "ME!" in "awesome."

Swift and Urie opened the 2019 BBMAs with a live debut of "ME!", setting the stage for a jam-packed night of memorable music and moments. And what a moment they created. The performance started off with a full-on marching band before Swift made her grand entrance in a sequined, multi-colored leotard and started belting out the song. Urie, as he did in the video, flew onto the stage with an umbrella in Mary Poppins-esque fashion, before frolicking across the stage with Swift.

In true Taylor fashion, the duo introduced themselves and welcomed the audience (and the world) to the Billboard Music Awards. And just in case there weren't enough umbrellas for your liking, the performance's huge finale had dozens of acrobats descend upon the crowd and do some dazzling tricks, before Swift and Urie flew across the arena in a huge umbrella themselves. They made the BBMAs feel like a Disney dream, and we're sure they made Mary Poppins proud.

Soon after her performance, however, fans pointed out the similarities between Swift using a marching band and Beyoncé's huge marching band at her Coachella performance, as documented in her recent Netflix documentary Homecoming. While the timing is suspect, Swift has used a marching band theme before in the "You Belong With Me" video. And we're sure Queen Bey wouldn't mind her picking it up again. Imitation is the sincerest form of flattery, after all.

Swift and Urie previously teased their BBMAs performance when they went live via Instagram on "ME!" release day while rehearsing for the show, and promised an action-packed performance. "There's a lot of stuff going on that we have to learn how to do," Swift said, with Urie laughing in agreement. "There's whole new skills that we have to learn for this. It's a whole thing." If flying on a huge umbrella was one of them, they definitely succeeded.

Swift also talked about how "ME!" came to life during the livestream, saying that she wrote the first verse and chorus with writer and producer Joel Little and immediately thought that the song needed to be a duet. Swift knew the perfect man for the job, and rung Urie up herself. "From the moment you called me and showed me the song, I couldn't get it out of my head," Urie exclaimed.

When Urie was able to come into the studio, he was super sick but didn't want to cancel on Swift. "I woke up with a 105 fever," Urie revealed. "It was terrifying. I didn't have a voice." But once he got in there and met Swift, his mood changed and his voice miraculously came back as he proposed what would become the song's bridge, proving that the collaboration was simply meant to be.

Intriguingly, Swift revealed that there are still Easter eggs in the music video that fans haven't found yet, which she later revealed on Twitter to be the title of her upcoming seventh studio album and the name of her next single. Perhaps there were also clues in Swift's BBMAs performance? Swifties, it's time to watch it on repeat.