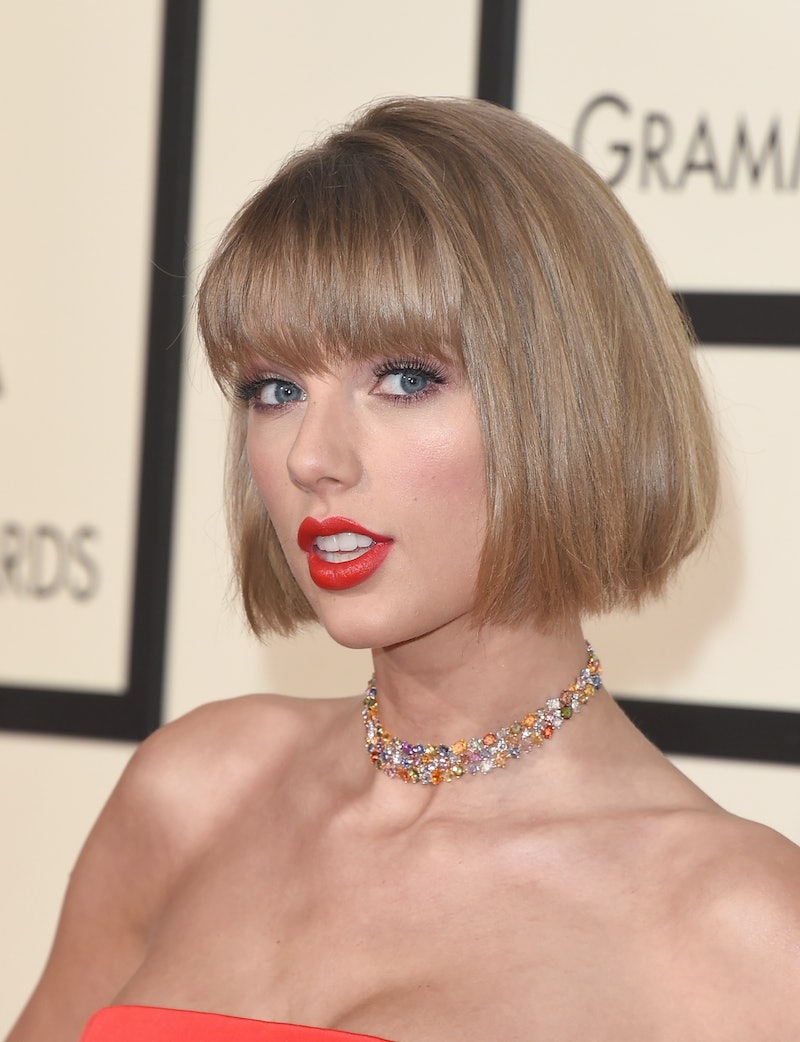 You may have already heard something about how Taylor Swift's new song "Gorgeous" disproves a certain meme-worthy lyric posed by the singer on "Look What You Made Me Do." On that song, the first release from her highly anticipated new album, Reputation, she sang that "the Old Taylor Swift" was dead. And, if you've read many media responses to her latest song, then you've likely also come across criticisms regarding Swift's return to love songs with "Gorgeous." As if — prepare to be shocked to the core here — the old Taylor is still very much alive and still serving up the sort of love songs that she became famous for.

The language used to describe Swift and the lyrical content of "Gorgeous" has felt a little condescending at times. Some, for example, said that the singer sounds like she is "moony" and "dopey in love" on "Gorgeous"; neither adjective sounds particularly positive. Others described the song as showing Swift returning "to gooey pop," thus providing a reductive admonishment of her back catalog of songs while also diminishing the dreamy fun of her new one. Then there were those who said that "Swift is "back on her bullsh*t with regards to making songs about relationships," and how her latest song "tells a story Swift loves returning to: her sweeping idealization of a man she doesn’t seem to like but is doomed to sing of anyway."

All of which is something that many criticisms of "Gorgeous," appear to be focused on. It isn't just that they're criticizing "Gorgeous" for being a love song, but also criticizing Swift for being a performer who seemingly hasn't progressed beyond such light fair, despite her recent efforts to the contrary.

Of all the justifiable reasons to criticize Swift, this feels like a particularly arbitrary one. As anyone who has ever spent more than 10 minutes listening to a radio can attest, pop music is full of songs that are about love, heartbreak, and crushes. Swift might have built her musical throne on the foundations of such songs, but she certainly isn't singularly responsible for their ubiquity. To call out "Gorgeous" for being lighthearted and playful in it's approach to the default pop love song is to pretend as though Swift is the only mainstream musician pumping out odes to love.

Incidentally, it's worth noting that male musicians like Justin Bieber, John Legend, Ed Sheeran, or The Weeknd are never called out for releasing yet another love song, despite their tendency to do so. There's something unapologetic about Swift's pursuit of love in her song lyrics that actually feels refreshing. If she feels like singing about how she might "sink and drown and die," in the "ocean blue eyes," of her crush, who really cares? And also, who hasn't been there? Swift has owned her masterful ability to encapsulate that first crush feeling in her music throughout her career. Like it or not, that's a part of her identity as a musician, and that's unlikely to ever change.

We're still a few weeks away from the release of Reputation, and it's impossible to know exactly what other songs are waiting for us on the album. While her sound may have undeniably evolved a little from 1989 and a lot from an album like Red, it's clear that the same Swift is still there behind the music.

So, let's drop the shame and the second guessing, already. The old Taylor Swift might be dead, but that doesn't mean she isn't up and walking already like some zombie goddess, capable of falling in and out of love and absolutely ready to sing about it. And her fans are still ready to listen, even if her critics aren't.

More like this
Everything To Know About Taylor Swift’s 10th Studio Album, 'Midnights'
By Grace Wehniainen and Jake Viswanath
There's A Taylor Swift Easter Egg In Ryan Reynolds' 'Deadpool 3' Teaser
By Marina Watts
Lizzo Twerks While Playing James Madison's 200-Year-Old Crystal Flute Onstage
By Radhika Menon
Looks Like She Made It
By Lindsay Zoladz, Beau Grealy and Tiffany Reid
Get Even More From Bustle — Sign Up For The Newsletter