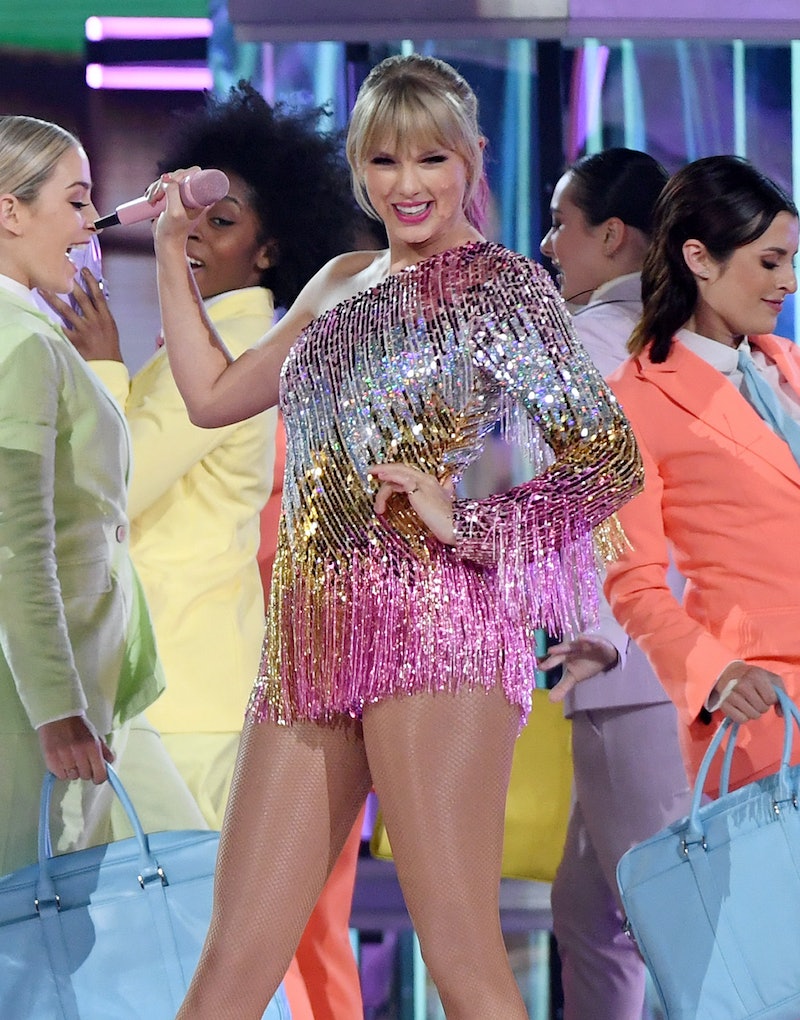 Okay, Swifties, grab a mop because some more #TS7 tea has been spilled. The "ME!" singer spoke to The Independent in a May 24 interview where Taylor Swift's seventh album title was majorly hinted at. It definitely wouldn't be the first...or even fiftieth time, to be quite honest, that Swift has sprinkled breadcrumbs about her upcoming era of new music. In late April, she ended a weeks-long speculation period by releasing her new single, "ME!" featuring Panic! at the Disco's Brendon Urie.

After fans came down from the candy-colored crash (and welcomed Swift's new cat Benjamin Button to the fam), it was time to analyze what the rest of her seventh album would bring. Swift even fanned the flames by tweeting on the day of the song's release, "So... the new album title is actually revealed somewhere in the video AND so is the title of the second single, but I haven’t seen people finding them yet... #MEmusicvideo."

Understandably, Swifties ~swiftly~ assembled in order to vision board possible album titles. When asked by The Independent just how many times the title is referenced in the music video, Swift responded, "I think you see it once and you hear it twice." (You can practically feel fans pressing play on the video for the 600th time.)

Swift also delved deeper with the outlet about what the vibe of the new album will be, as well as some of her musical inspirations. "I wrote the song this past winter, but I've known for quite a while what I wanted this album to look like, feel like, and evoke," Swift shared. "I wanted it to be like the sky looks after a storm. Colourful, calm, somehow more beautiful than it ever had been before."

The singer, who will also be playing a role in the upcoming Cats movie, said she even dropped some hints in the French dialogue she speaks with Urie in the beginning of the video. But no matter how many teases she includes, Swift explained that it's all in homage to her fans' ultra-savvy detective work.

"I trust them to eventually unravel all of them, even if it isn't until they hear the full album," Swift said. "That's how I designed these clues, so that different ones would reveal themselves over time. I know this makes me sound like a frustrating, magical elf making people guess my name or something. If the fans tell me they're not having fun with it anymore, I swear I'll stop!"

Several fans have taken to social media to posit their own theories about the album's title including, Lover, which checks off the boxes for number of times in the music video. While others have guessed everything from Kaleidoscope to Rainbow to Heart. All feel pretty on-brand for the Grammy winner. Plus, the chances of fans stumbling upon her new album's title feels much more likely considering the amount of press Swift has been doing lately.

After keeping tight-lipped about the reasoning behind her Reputation music, Swift has been back on the scene in a major way stopping at The Ellen DeGeneres Show (where she reportedly dropped music hints in the interview itself), performing on The Voice, and revealing an awkward story on The Graham Norton Show. On the late night talk show, Swift divulged that during the interview for a previous Rolling Stone cover, she got into not one, but two car accidents while driving around a reporter. But, hey, if Swift's forthcoming album is all about embracing who you are, this anecdote feels very relevant.

As Swifties trade theories over Twitter in the build-up to #TS7, the world will be keeping its eyes and ears open for Easter eggs.

More like this
Everything To Know About Taylor Swift’s 10th Studio Album, 'Midnights'
By Grace Wehniainen and Jake Viswanath
Taylor Swift Wants To Direct A Movie Next — But You Might Have To Wait
By Radhika Menon
What Demi Lovato Really Thinks About Child Stardom, Depression, & Sobriety
By Radhika Menon
Kanye West Apologizes To Kim K "For Any Stress I Have Caused" In Rare Interview
By Jake Viswanath
Get Even More From Bustle — Sign Up For The Newsletter