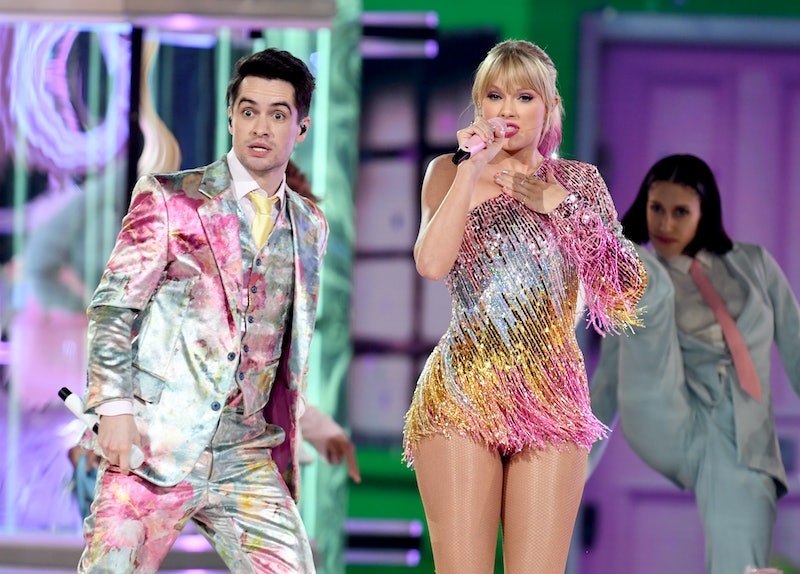 With the anticipation for Taylor Swift's seventh album's release increasing exponentially each day, Swifties are on high alert for any clues about what TS7 might entail. So far, Swift has already hinted that the new album's title was revealed in the video for Swift's latest single, "ME!," which dropped in late April. Besides possible song and album titles, very little is known about the new album though, and until Tuesday, it was entirely unclear what Swift's new music would be about. It turns out, Taylor Swift included "political undertones" in her new album, according to an interview with the German site, RTL.

Entertainment Tonight reported that Swift's interview, which was initially published in German, hinted at the types of themes her fans can expect from the newly politically-vocal singer. "I definitely think there are political undertones in the new music I made," Swift said, according to a translation from ET. The "ME!" singer added, "I’m not planning to stop encouraging young people to vote and to try to get them to talk about what’s going on in our country. I think that’s one of the most important things I could do."

Swift seems to be finding her voice in the political arena. Though she had previously done her best to stay silent about political matters for most of her career, in Oct. 2018, she surprised the public by supporting two Tennessee candidates for Congress on Instagram. Using her music as a platform to comment on politics would be a huge shift from the singer's apolitical "reputation" in the past, but as Swift said in her 2017 song "Look What You Made Me Do," the "old Taylor" is dead. And the new Swift isn't afraid to speak her mind on politics.

In her Instagram post in which Swift encouraged her followers to vote, the singer reflected on her past decision to stay silent on political matters. "In the past I’ve been reluctant to publicly voice my political opinions, but due to several events in my life and in the world in the past two years, I feel very differently about that now," she said.

Before denouncing a senatorial candidate running for election in the 2018 midterms, Swift explained, "I believe in the fight for LGBTQ rights, and that any form of discrimination based on sexual orientation or gender is WRONG. I believe that the systemic racism we still see in this country towards people of color is terrifying, sickening and prevalent." Then, at the 2018 American Music Awards, Swift encouraged viewers to vote in the upcoming election during her acceptance speech after winning Artist of the Year.

Remarkably, Swift's encouraging of her fans to register to vote before the state deadline reportedly resulted in an uptick of young voter registrations, according to Vote.org. As CBS reported, in the two days following Swift's political Instagram post, Vote.org received 105,000 new registrations nationwide, 64,000 of which were for 18 and 29 years old. It's not entirely possible to attribute each of those new registrations to Swift's Instagram post, but fans on Twitter couldn't help but commend the possible effect of Swift's social media activism.

In a March essay Swift wrote for Elle titled "30 Things I Learned Before Turning 30," she wrote, "I’m finding my voice in terms of politics... I realized that it actually is my responsibility to use my influence against that disgusting rhetoric. I’m going to do more to help. We have a big race coming up next year." It sounds like Swift will use her new album, the title of which is apparently revealed somewhere in the "ME!" music video, to continue using her newfound political voice.

More like this
Everything To Know About Taylor Swift’s 10th Studio Album, 'Midnights'
By Grace Wehniainen and Jake Viswanath
There's A Taylor Swift Easter Egg In Ryan Reynolds' 'Deadpool 3' Teaser
By Marina Watts
Mel C Wants You To Know That Margaret Thatcher Wasn’t A Spice Girl
By Darshita Goyal
Two UK Cities Are Now In The Running To Host Eurovision 2023
By Sam Ramsden and Rachel Mantock
Get Even More From Bustle — Sign Up For The Newsletter