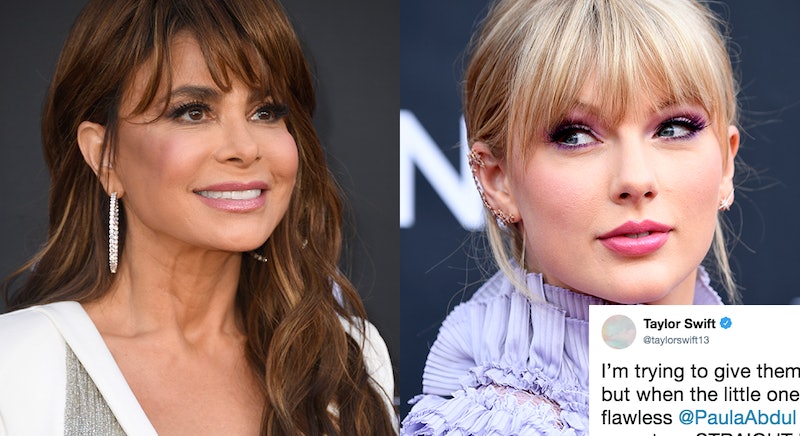 Cause paw-pposites attract. Shortly before the 2019 Billboard Music Awards began Wednesday evening, Taylor Swift posted a photo with Paula Abdul. And as if we needed any more reason to freak out over this already incredible picture of this pair of icons, they posed with Swift's cats Benjamin Button and Olivia Benson.

And Swift clearly understands that. “I’m trying to give them a normal upbringing but when the little ones and I ran into the flawless @PaulaAbdul on the way to red carpet we STRAIGHT UP had to get a pic,” she tweeted. Sometimes, you just have to set aside your parenting philosophies for a quick moment and make sure your little ones get a pic with a living legend. And for this pic, I am straight up (now tell me) thankful. Oh, oh, oh, I am having fun.

Don't mind me as my eyeballs rush, rush on over to this important photograph.

Abdul also shared the photo before the show, writing, "Ran into @taylorswift13 and her two babies backstage at @BBMAs I JUST ADORE YOU!!!! xoxoxoxoP"

Did Abdul, Swift, Benjamin Button the cat, and Olivia Benson the cat win the night before the Billboard Music Awards even began? Maybe they did, maybe they did.

Somewhere, Karyn the cobra is devastated she did not get a chance to pose with the artist who brought the lyric "He's a coldhearted snake lookin' into his eyes" to Top 40 radio. You will get 'em next time, Karyn.

More like this
Craig David Is Still Slicker Than Your Average
By Olivia-Anne Cleary
The Spice Girls Just Dropped A Brand New Music Video
By Sam Ramsden
20 Years Later, Kelly Clarkson & 'American Idol' Judges Reunite For Her Hollywood Walk Of Fame Star
By Radhika Menon
Everything To Know About Taylor Swift’s 10th Studio Album, 'Midnights'
By Grace Wehniainen and Jake Viswanath
Get Even More From Bustle — Sign Up For The Newsletter