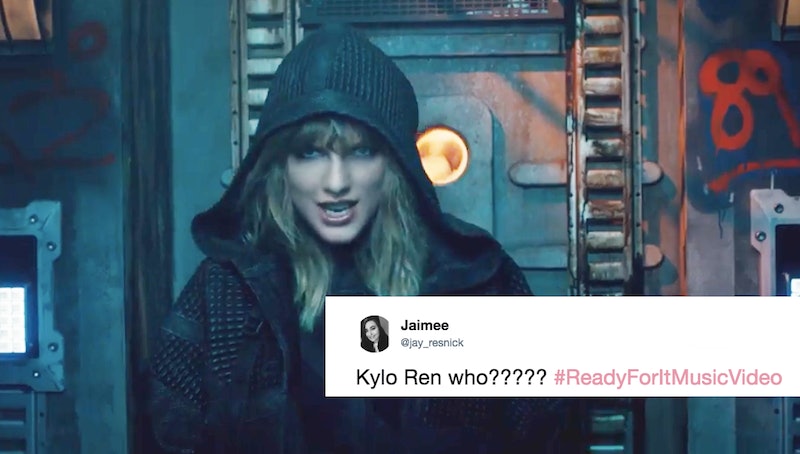 Early Friday morning when everyone was probably already awake to be the first to marathon Stranger Things Season 2, Taylor Swift's "...Ready For It?" music video made its debut on the world wide web. The video, which the singer teased the Monday ahead of its premiere, featured a lot of futuristic imagery, including Swift in a nude body suit that initially drew comparisons to both Ghost In The Shell and Kanye West's "Famous" video. Once the full clip was finally unveiled, it didn't take long for Twitter to making a list of all the pop culture references Swift makes in her music video — but not all of them seem to be intentional references. The derivative nature of the clip can explain away most of the similarities, but that hasn't stopped Twitter from making memes.

Of course, there's no better way to enjoy any new show or video than by watching it with Twitter, whose users are unparalleled when it comes to serving up memes and jokes. But the fact that they were able to find so many allusions to pop culture in the four minute video will make watching it an even better experience for fans and hates alike. After all, who can watch "...Ready For It?" the same way knowing that Swift now has something in common with the infamous Kermit meme?

Are you ready for it? Read on.

One of the biggest comparisons to come out of the music video is one that you can't un-see. The fact that Dark Taylor is wearing a hood while Nude Body Suit Taylor isn't as they face each other through a screen immediately made everyone think of the infamous Evil Kermit Meme. (For the initiated, the image from a scene in Muppets Most Wanted went viral in 2016 as people used it to encourage themselves to do dark deeds like steal dogs or make things that weren't their business their business.) One can only wonder if Swift did this on purpose and, if so, what fresh evil she's encouraging her non-hooded doppelgänger to do.

It looks like the Force Awakens antagonist has been dethroned by the Swifties. The fact that one version of Swift wanders around the clip in a black hood up drew immediate comparisons to Star Wars. Personalized Sith apparel is used in that universe to protect the wearer and intimidate all who see it, and Kylo Ren's all-black outfit is no different. Clearly, the hooded version of Swift has gone to the Dark Side.

3. Ghost In The Shell

From the moment the initial "...Ready For It?" clip showed Swift in this nude bodysuit, everyone highlighted the connection between this image and Ghost In The Shell. In the controversial film, which drew accusations of white washing for casting Scarlett Johansson in the lead role that originally played by a Japanese woman, Johansson's character wears a similar suit. This comparison may have been intentional, if the sci-fi feel of the entire video is anything to go by.

Is the image of Swift being trapped inside a lab and experimented on by shadowy outsiders (ahem, herself) a coincidence right before Stranger Things Season 2 premieres? Probably. Is it funny to think that Thor and Stranger Things may have thrown themselves into a blender and the resulting concoction was the visual we now know as the "...Ready For It?" music video? Definitely.

It looks like, when Tony Stark retired (for, like, one movie), Swift decided to throw her hat in the ring to take his place in the Avengers. Which... wouldn't really be that much of a leap, so maybe "...Ready For It?" should be your preview of Avengers 3?

Likely due to the super suit that doppelgänger Swift is seen wearing, this Terminator comparison is pretty weak. And yet it's still hilarious.

Of course, Kermit isn't the only one who had to meet his own twin. This Spider-Man meme isn't as on point as the Kermit comparison, but it deserves partial credit.

Much like Ghost In The Shell, Blade Runner was an easy comparison due to the sci-fi elements and especially the use of a replica Taylor Swift — not to mention the dystopian world.

Ultimately, there's a lot at play in these three minutes, and the more you watch, the more you're going to identify familiar pop cultural images. But whether or not those images are intentional are a little harder to assess. There are enough hidden messages in the video even without these references anyway.

More like this
Everything To Know About Taylor Swift’s 10th Studio Album, 'Midnights'
By Grace Wehniainen and Jake Viswanath
Taylor Swift Wants To Direct A Movie Next — But You Might Have To Wait
By Radhika Menon
Self Esteem's “F*cking Wizardry” Is An Anthem About Knowing Your Worth
By El Hunt
Mariah Carey Is Releasing Her “Lost” '90s Grunge Album
By El Hunt
Get Even More From Bustle — Sign Up For The Newsletter