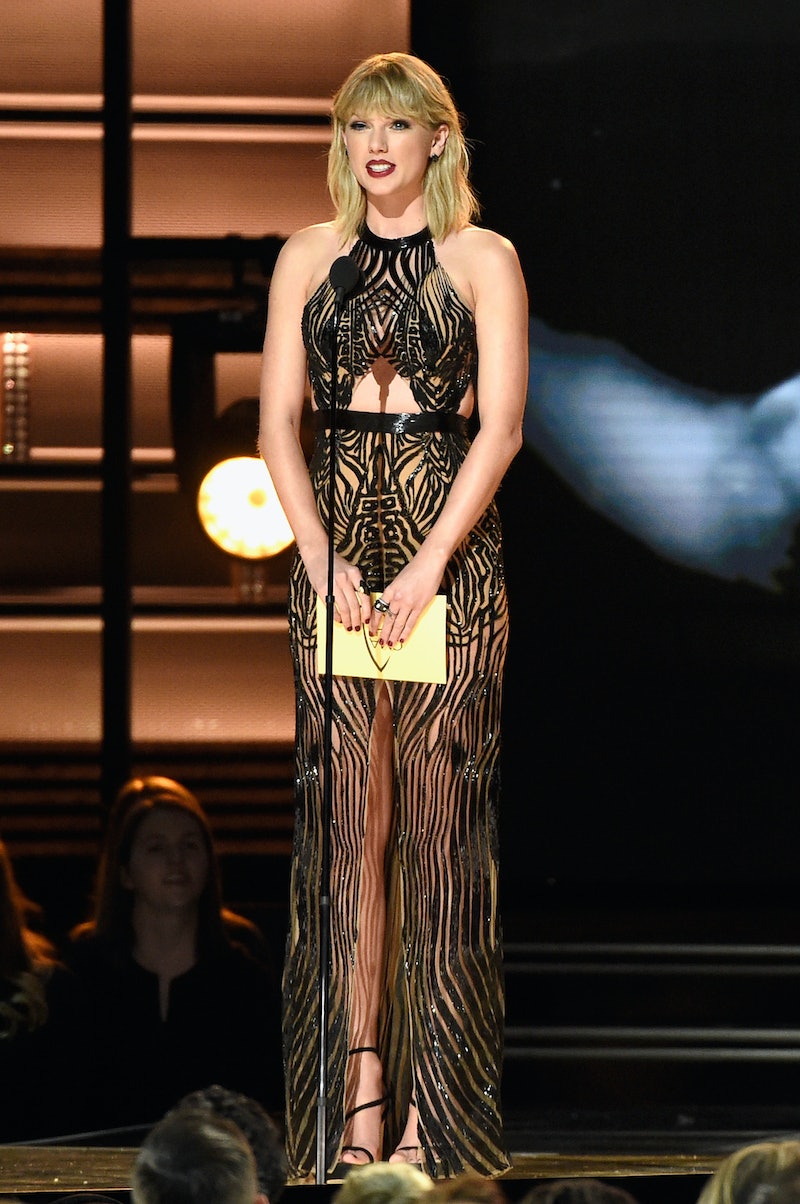 Many of the celebrities who were outspoken supporters of the Hillary Clinton campaign showed up to Saturday's massive Women's March on Washington. One celeb who notably did not endorse Hillary Clinton even gave a shoutout to the march. Taylor Swift tweeted her support for the Women's March on Saturday, writing: "so much love, pride, and respect for those who marched. I'm proud to be a woman today, and every day. #WomensMarch."

The tweet did not indicate whether Swift attended any of the worldwide marches in person, so her solidarity with the marchers might come as a surprise to her critics and fans. Swift is a self-described feminist, who is close friends with many of Hillary Clinton's biggest celebrity supporters, including Lena Dunham and Tavi Gevinson. However, the election came and went without any public endorsement of either candidate from Swift, possible coded Instagram fashion hints from the voting booth aside. Swift's tweet in support of the march, on the other hand, suggests an allegiance to the movement against President Donald Trump. While the Women's March's platform emphasizes inclusivity and diversity, it was seen by many of its participants as an anti-Trump march. Chants of "not my president" could be heard in Washington D.C. and the many other participating cities and towns where hundreds of thousands showed up.

During the election, it was disappointing in many ways to witness Swift's continued silence when so many artists were speaking out against Donald Trump, a man with a history of derogatory remarks toward women and minorities. As a crossover country artist, Swift appeals to the demographic of white Rust Belt voters who were most likely to vote for Trump. While I hope that Swift voted for Clinton, it was difficult to read her silence during the election as anything but an attempt to keep her broad fanbase happy, whatever her actual reason was.

Swift's choice to publicly endorse the march is at least somewhat polarizing. Many Trump voters have decried the marchers and many of the marchers themselves have shown active disdain for the U.S. president through their Women's March signs. It's likely that Swift's Twitter statement could cost her some fans, and it's hopefully made more than a few people who had mocked the march reconsider their stance.

However, the fact that Swift chose this particular moment and movement to express a political sentiment illustrates a common progressive critique of the Women's March. According to Colorlines, many activists and women of color have expressed complicated feelings upon seeing the massive Women's March crowds when so many of those women have been absent from Black Lives Matter marches happening all over the country. After all, white women, who many expected to vote for Hillary Clinton, instead turned up for Donald Trump, according to Vox. It's likely that many of the white women who attended the Women's March have friends who voted for Trump, and it's a fair critique to wonder how their activism manifests in those interpersonal situations, rather than in a massively attended national march.

It's never too late to become more politically active, and for celebrities and women like Taylor Swift, now is much better than never. Hopefully, this taste of activism will incentivize the many women who had never attended a protest before to go to the next Black Lives Matter, minimum wage, climate change, or Anti-Trump rally. It should also enforce the idea that outside of the catharsis of a protest, women who support women and minorities should be acting upon that belief on a daily basis by donating to and supporting organizations that support those most threatened by a Trump presidency, confronting bigotry in their interpersonal actions, and getting more involved in politics.

Real activism is neither convenient nor a PR tool, and it's important that celebrities like Taylor Swift and everyday protesters both literally and figuratively put their money where their mouth is.