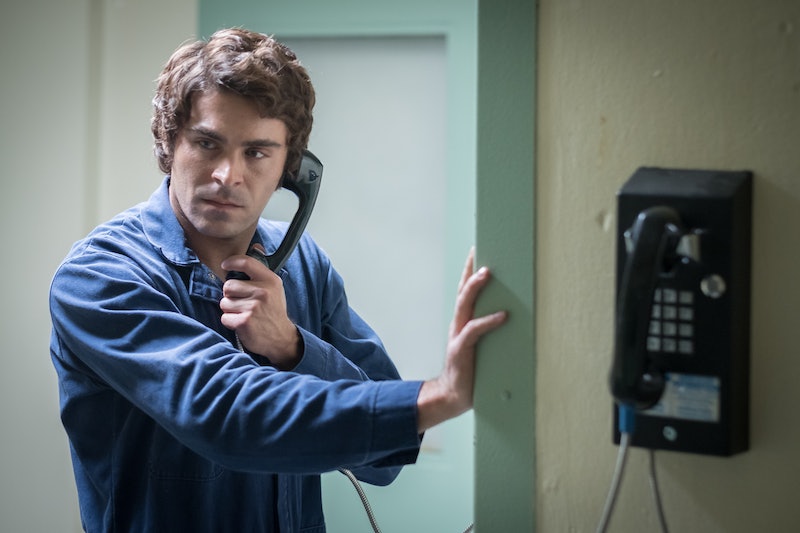 Joe Berlinger, the filmmaker behind Netflix's Conversations with a Killer: The Ted Bundy Tapes has taken another step down the infamous serial killer's dark path. His feature take on the story, Extremely Wicked, Shockingly Evil and Vile, on Netflix May 3, centers around the relationship between Bundy and longtime girlfriend Elizabeth Kloepfer, before and after he's arrested and put on trial for his crimes. Of all the unbelievable moments in the film that are true to life — including Kloepfer's unawareness, Ted's acting as his own lawyer, and how he was caught — perhaps the hardest to comprehend is that Ted Bundy really escaped prison — twice.

It was actually nearly three times. In June 1976, after being found guilty of kidnapping and assault, Bundy was sentenced to serve one to 15 years in Utah State Prison, ABC reports. Daily Mirror notes that in October of the same year, he was caught in the prison yard with airline schedules, road maps, and a Social Security card, and moved to solitary.

USA Today reported that, after evidence was found tying Bundy to the Colorado murder of 23 year-old nurse Caryn Campbell, he was extradited and transferred to Aspen to stand trial in 1977. It was there he had his first successful escape, which the movie shows. "Planned," however, really isn't the word for it. ABC News reports in a recorded call between Bundy and prison psychologist Dr. Al Carlisle, the escape was more impulse than anything. "Over the months, I had noticed a number of opportunities to just walk right out... I'd thought a great deal about escape, and I don't know if I had the guts to do it, quite frankly," Bundy said.

Allowed to assist in his own defense, Bundy had access to the 2nd floor law library above the Pitkin County Courthouse. A judge decreed he didn't have to wear shackles, so Bundy was free to walk around. Per ABC News, it was June 7 when Bundy was able to make a move. "The guard went outside for a smoke," he's reported to have said later. "The windows are open, and the fresh air is blowing through. And the sky was blue, and I said, 'I'm ready to go,' and walked to the window and jumped out. Honest to god, I just got sick and tired of being locked up."

Fleeing into the mountains and breaking into a cabin, Bundy eluded police search for six days. With no means of further escape and a sprained ankle from the jump, Bundy walked back to Aspen and attempted to steal a car with its keys left in the ignition. Police became suspicious after seeing the car weaving down the road, and Bundy was soon back in jail, The Coloradoan reports.

His second attempt was more cinematic. Bundy was moved to a prison in Glenwood Springs, Colorado. According to Inside Edition, he slowly acquired a hacksaw and detailed map of the jail from other inmates, and had over $500 cash smuggled in by visitors. 610KONA reports that in a 20/20 interview, Bundy's defense attorney John Henry Brown said, “When I visited him in Glenwood, I noticed that he had lost a lot of weight. I’d say he’d lost 20 or 25 pounds. I would think this would’ve come to the attention of the jailers perhaps. Why is he doing this?”

All part of the plan. According to The Mirror, Bundy used the hacksaw to cut a hole in his ceiling on December 30, 1977, when jail staff was a skeleton crew for the holidays, arranged books and pillows on his bed to look like he was occupying it, and squeezed himself up through the small opening and into a duct crawlspace.

Per Oxygen, the crawlspace led to a connected closet in a jailer's apartment. Bundy climbed through the apartment and walked out unnoticed. Because of the holiday and limited staff, Bundy's escape wasn't even noticed until the next day.

By then, according to ABC News, he had taken a flight to Chicago, train to Michigan, drove to Atlanta, and finally took a bus to Florida, where he remained until his re-capture on February 15 the next year, attempting to drive across the state border into Tennessee, though he claimed to police that he was someone else. When his real identity was discovered, Bundy was indicted. It's here that Extremely Wicked picks up Kloepfer's point of view again, according to Variety's review, with Bundy acting as his own attorney in the two 1979 murder trials.

Per ABC News, he was found guilty of murder and associated charges in both trials. In the years after his sentencing, he confessed to 30 murders, though the real number may be higher. He was executed on Jan. 4, 1989.

More like this
Gabby Petito’s Family Responded To The New Lifetime Movie About Her Final Days
By Grace Wehniainen
Everything To Know About The Long-Awaited ‘Community’ Movie
By Stephanie Topacio Long
20 Photos Of The 'Hocus Pocus' Cast Then & Now
By Radhika Menon
13 Photos Of The 'Blonde' Cast Vs. Marilyn Monroe & Other IRL Counterparts
By Marina Watts
Get Even More From Bustle — Sign Up For The Newsletter