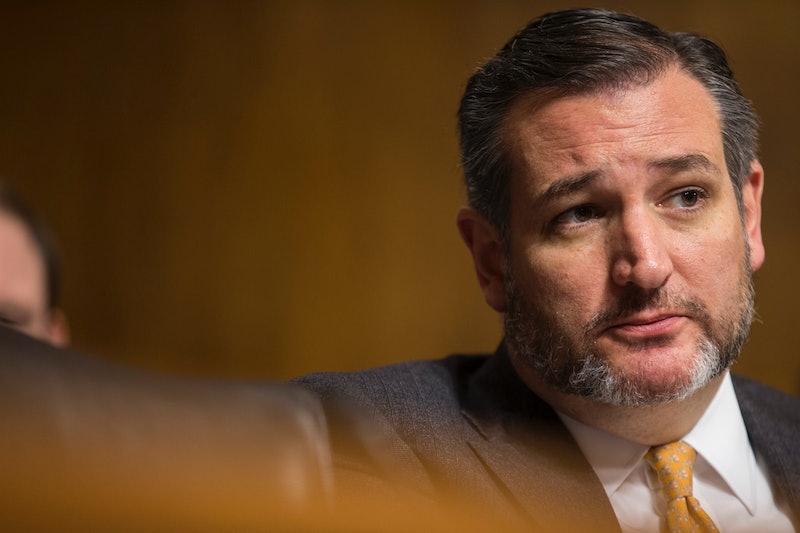 On Monday, two politicians made separate arguments involving croissants, and it had nothing to do with April Fool's day. What's more, the pastry was just a metaphor for a much bigger and more serious issue. Sen. Ted Cruz mocked Alexandria Ocasio-Cortez for lamenting the exorbitant price of croissants at LaGuardia Airport — but his apparent clap back to the Democrat representative showed just how much he seemed to have missed her initial point.

Ocasio-Cortez originally wrote, "Croissants at LaGuardia are going for SEVEN DOLLARS A PIECE [...] Yet some people think getting a whole hour of personal, dedicated human labor for $15 is too expensive??"

Shortly after, she added a subsequent tweet, in an apparent reply to the conservative response to her original tweet. She wrote, "GOP taking every tweet so earnestly, making my point for me. It’s not an argument against the price of a croissant - it’s about the value of human worth. But I guess that idea is foreign to them since their policies treat people as disposable anyway"

Cruz must have missed her explainer tweet, because his "roast" of Ocasio-Cortez made the exact mistake she'd worked to clarify. Cruz wrote, "Oh the humanity! Here’s the answer: government-mandated FREE CROISSANTS FOR ALL. And we’ll just force the bakers to give all of their time for free. #SocialistLogic#AprilFools"

Though Ocasio-Cortez didn't offer a second explanation to Cruz following his tweet, plenty of others did, piling into his mentions and calling him out for a complete miss. Comic and writer Dave Sirus tweeted, "You’re really getting the sh*t kicked out of you in this argument Ted"

However, in spite of the largely critical response to his claim, Cruz decided to dig his heels into his prior opinion. Later on on Monday, he tweeted a Yahoo News link later that day, writing,

Yahoo News 'reports' I missed @aoc point. Uh, no. (1) LaGuardia croissants are $7 BECAUSE it is govt monopoly w/ $19 min wage. (2) Medicare for all promises 'free' healthcare by forcing doctors (by analogy, bakers) to give away their labor for govt wages.

Cheney lashed back by tweeting an instructional video to Ocasio-Cortez, one that's clearly meant for children and explains how a bill becomes a law. To many Twitter users in Cheney's thread, it was unclear how this reply negated anything that Ocasio-Cortez had said previously.

Cruz did not appear to have a comment on this front, but it's certainly possible he will in the coming days.