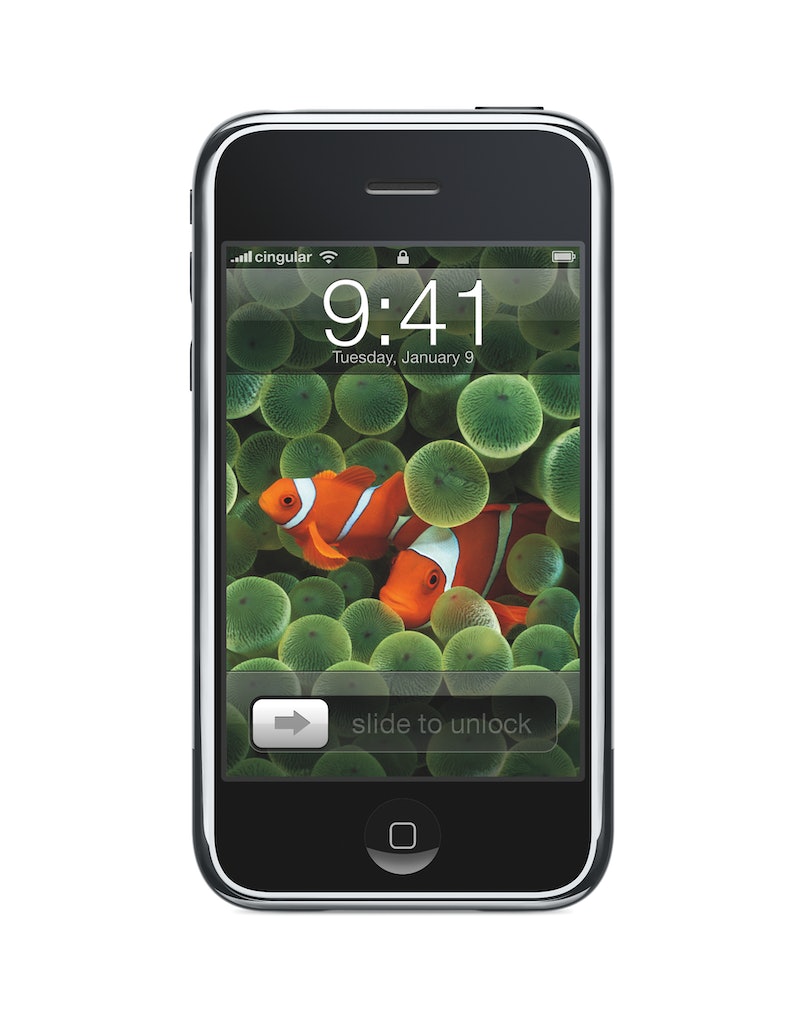 Monday marks the tenth anniversary of the original iPhone, which Steve Jobs first unveiled to the world on Jan. 9, 2007. So many things have happened in the since then, with debates over emojis, message encryption, and the effects of smartphones on our social lives being just a few. In the ten years since the iPhone launched, many of us have gotten used to sharing our photos, livestreaming important events, and using apps to make our lives easier. But as a piece of technology as revolutionary as the iPhone must, Apple's bestselling product has had to evolve rapidly over the years to keep up with our needs.

The first iPhone, which was not actually released until June 2007, was much smaller than the most recent models. Its critics did not believe it would be a bestseller, given its hefty price tag, but the iPhone's multitouch features — which seemed futuresque at the time — led it to huge success.

Since then, the iPhone has gotten a better camera, more storage space, faster processing speeds, high-res displays, location services, video calling capacity, and a sleeker look. Not all the changes were necessarily exciting to customers — the loss of the audio jack, for one, was a bit frustrating for people who relied on their iPhones for music — but for better or for worse, the iPhone has come a long way. Let's take a look at how it has changed.

The first iPhone had a 3.5-inch touchscreen and a 2-megapixel camera, according to Computerworld. Under the terms of a two-year contract, the 4GB model cost $499 and the 8GB model cost $599, leading critics to argue that it was too expensive.

Less than a year after the first iPhone went on sale, the iPhone 3G was announced in June 2008, and rolled out shortly afterward. The iPhone 3G came with location services and a built-in GPS, and it also enabled faster internet access. More notably, this iPhone model was considerably cheaper: An 8GB model cost $199 and a 16GB model cost $299.

The biggest difference between the 3GS and 3G models was that the 3GS was twice as fast. The iPhone 3GS also offered a 32GB model, which ran at $299.

With the iPhone 4 came FaceTime, a built-in video chat service, as well as a high-resolution "Retina" screen. Despite the iPhone's redesign between models, the prices of the iPhone 4 remained the same as its predecessor's.

Unlike previous summer releases, the iPhone 4S was released in October. Jobs had stepped down as CEO just a few weeks prior, citing health issues. It was new CEO Tim Cook who unveiled the 4S, and he explained that this new model had a dual-core processor. The iPhone 4S also marked the first time that a 64FB model became available, for $399.

In a break from its predecessors, which had 3.5-inch screen, the iPhone 5 had a 4-inch screen, and was touted as faster than previous models. The available storage models and prices, however, did not change.

For the first time, Apple released two new iPhone models at the same time back in 2013. The iPhone 5S —available in black, white, and gold — had a faster system, as well as a fingerprint identity sensor called Touch ID which enabled users to log into their devices more quickly. The 5S also had a new motion data processor, according to Computerworld, which was supposed to support health and fitness apps in particular.

The iPhone 5C, meanwhile, was a more colorful version of the iPhone 5, and was designed to be less expensive. While the iPhone 5S had the same price models as its recent predecessors, the 5C started at $99 for a 16B model.

The iPhone 6's A8 processor was updated to an A9 processor in the iPhone 6S and 6S plus. Additionally, both new models — which came in rose gold as well as the usual colors — got major camera upgrades to increase FaceTime call and selfie quality as well as video-shooting capacity. Finally, a new 3D touch capability added a layer of nuance to Apple's multi-touch interface by detecting just how much pressure users put on the touchscreen display.

And now, after 10 years, we are on the most current edition of the iPhone. One major change that Apple made to the iPhone with these latest models was the removal of the audio jack. For users who relied on their iPhones for music, this meant either using the headphones Apple provides, or purchasing an adapter with which they can use their own headphones.

Apple also started experimenting with haptic touch technology with the iPhone 7, which made it possible for users to "feel" certain buttons on the touchscreen display through vibrations and sensors. The home button on the iPhone 7 models, for example, is a haptic-based virtual button.

Lastly, the iPhone 7S has a dual-camera setup, which means that it has both a wide-angle and a telephoto lens rather than just one. This is meant to optimize the photos.

The iPhone has seen a lot of changes over the past 10 years, and these changes don't seem on the verge of stopping. Apple has big plans for its next model, the iPhone 8, and other products, so it looks like we'll have a lot to look forward to between now and the iPhone's 15th anniversary.

More like this
The Real Reason Your Instagram Story Viewers Show Up In That Order
By Emma Carey
Behind The Hilarity Of The "POV: You Walk Into My Room" TikTok Trend
By Lexi Inks
20 Smart Devices Under $35 That’ll Change The Entire Vibe Of Your Home
By Emma Carey
How To Turn Off Night Mode On Your iPhone Camera
By Emma Carey
Get Even More From Bustle — Sign Up For The Newsletter