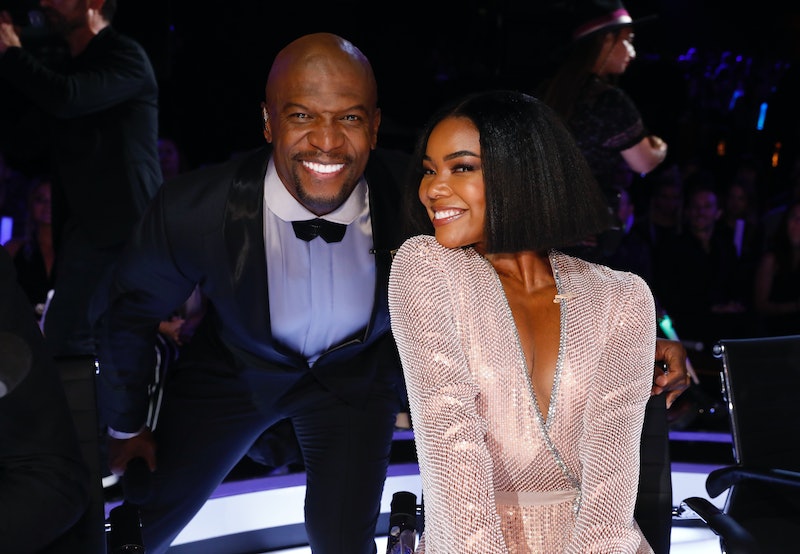 After a week embroiled in controversy for his America’s Got Talent comments, Terry Crews publicly apologized to Gabrielle Union. The AGT host became the subject of criticism last week when he defended the NBC show after news broke that Union parted ways with it in November 2019. Her departure came after she reportedly called out a toxic workplace culture.

Crews told the Today show at the time, “I can't speak for sexism, but I can speak on behalf of any racism comments. That was never my experience.” On Twitter on Friday, the AGT host said it wasn't his "intention to invalidate" Union's experience. Citing his advice to Kevin Hart to “acknowledge the pain of other people,” Crews tweeted, in part, in a series of tweets, “@itsgabrielleu, I want you to know it was never my intention to invalidate your experience — but that is what I did. I apologize. You have been through a lot in this business, and with that I empathize with the struggle toward fairness and equality in the workplace.”

He continued, “You are a role model to the entire black community and In my desire to be professionally neutral as your co-worker, I should have at the very least understood you just needed my support.”

Crews’ positive remarks about AGT — such as it being the “most diverse place I have ever been” — drew backlash since Union had been a voice of support when Crews opened up about his alleged sexual assault in 2017. One Twitter user wrote, “Terry Crews received so much love and support from Black women. It's bullsh*t the way he is tap dancing and throwing Gabrielle Union under the bus.”

Last November, Variety reported that Union had been let go from the show after she supposedly raised concerns about racist jokes and had been told that her hairstyles were “too black,” amongst other allegations. After the news of her departure broke, she received an outpour of supportive messages on Twitter. Union broke her silence on the matter in late November and tweeted, “So many tears, so much gratitude. THANK YOU! Just when you feel lost, adrift, alone... you got me up off the ground. Humbled and thankful, forever.” Soon after, NBC issued a statement about Union’s departure that said the network was “working with” the judge.

"We remain committed to ensuring a respectful workplace for all employees and take very seriously any questions about workplace culture," the statement read. "We are working with Ms. Union through her representatives to hear more about her concerns, following which we will take whatever next steps may be appropriate.”

More like this
Kanye West Apologizes To Kim K "For Any Stress I Have Caused" In Rare Interview
By Jake Viswanath
'The Crown's Matt Smith Reveals Prince Harry's Hilarious Response To The Series
By Bustle UK
Everything To Know About Taylor Swift’s 10th Studio Album, 'Midnights'
By Grace Wehniainen and Jake Viswanath
Is Dua Lipa Dating Trevor Noah? New Photos Show Them Kissing & Hugging
By Brian Anthony Hernandez and Martha Sorren
Get Even More From Bustle — Sign Up For The Newsletter