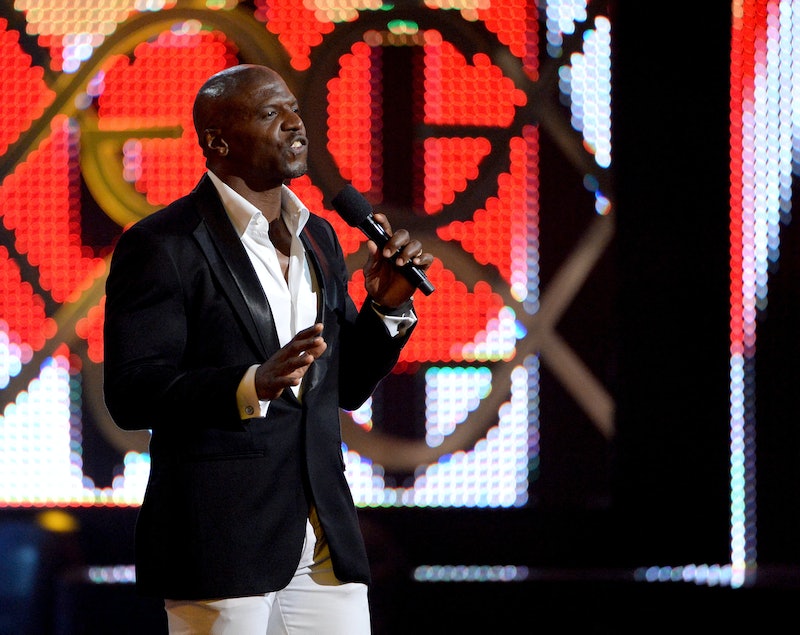 Emboldened by reports about allegations against film producer Harvey Weinstein, Terry Crews, actor and former football player, decided to speak out about his own experiences in support of the women who have come forward. On Twitter Tuesday afternoon, Crews claimed to have been sexually assaulted by an unnamed industry executive at a Hollywood party in 2016. The story is detailed in a series of 16 tweets that reflect exactly why more men in Hollywood need to speak out against the forces that especially silence women by threatening their careers.

His tweets came after Weinstein was accused of a series of sexual abuses toward former female employees in two major New York Times pieces which were published on Oct. 5 and Oct. 10. Weinstein's former legal advisor wrote that he "denies many of the accusations as patently false" and Weinstein himself told the Times that, "I appreciate the way I’ve behaved with colleagues in the past has caused a lot of pain, and I sincerely apologize for it.” On Oct. 10, the Times also reported that Weinstein's spokeswoman, Sallie Hofmeister, released a statement denying accusations of rape and/or retaliation toward women who denied sexual advances:

Any allegations of non-consensual sex are unequivocally denied by Mr. Weinstein. Mr. Weinstein has further confirmed that there were never any acts of retaliation against any women for refusing his advances. He will not be available for further comments, as he is taking the time to focus on his family, on getting counseling and rebuilding his life.”

In response, Crews shared on Twitter that the recent reports have been emotionally traumatic for him because the allegations trigger memories of an experience he claims he had last year.

"My wife n I were at a Hollywood function last year n a high level Hollywood executive came over 2 me and groped my privates," Crews alleged on Twitter late in the afternoon on Oct. 10.

Crews described feeling shocked at the time, and immediately having the impulse to fight the executive. He didn't, however, because he said he feared being arrested and sustaining longterm damage to his acting career.

"'240 lbs. Black Man stomps out Hollywood Honcho' would be the headline the next day," Crews tweeted. He followed up, "Only I probably wouldn’t have been able to read it because I WOULD HAVE BEEN IN JAIL. So we left."

Crews said he was at the party with his wife, and that both he and she looked at the executive "like he was crazy," and that the executive, in turn, "just grinned like a jerk." The executive in question was unnamed and no identifying details were given.

Ultimately, he said, the executive called him the next day and apologized. This experience, Crews said, has helped him understand why women forego the painful process of reporting sexual harassment or sexual assault. And that's not something you hear often from men — especially after the allegations against Weinstein were published. In fact, some reports have suggested that far too many men in Hollywood have stayed silent.

"I let it go," Crews tweeted. "And I understand why many women who this happens to let it go...Who’s going 2 believe you? ( few) What r the repercussions?(many) Do u want 2 work again? (Yes) R you prepared 2b ostracized?(No)."

Crews further alleged that Weinstein "is not the only perpetrator." He continued, "Hollywood is not the only business [where] this happens, and to the casualties of this behavior— you are not alone." He concluded his tweets by saying he hoped hearing his account might deter a sexual predator from acting in the future, and further, that he might "encourage someone who feels hopeless."

Weinstein's current attorney Charles J. Harder has released a statement announcing that Weinstein would be suing the Times for the report that has sparked all of the backlash:

According to the Times report, many people who worked with or adjacent to Weinstein were aware of the accusations over the years. But as Crews highlighted, awareness doesn't necessarily result in action, because for accusers, there can be a lot of pitfalls.