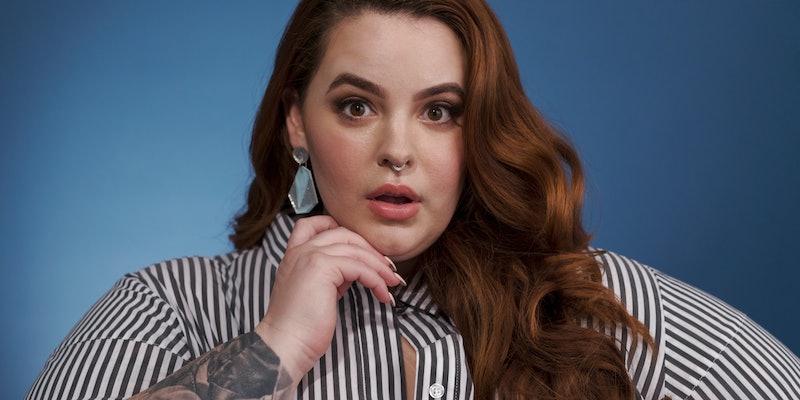 Tess Holliday breezed into Bustle HQ on one of New York City's muggiest August days. Right away, she admitted that her black and white button down and faux leather skirt weren't helping with the sweltering heat. Still, it took a mere moment to touch up makeup and her inhumanly glossy hair before she started doing the thing she was born to do: Model.

Mid-shoot, while posing dreamily, Holliday blurts out, "Just thinking about burgers," and the room erupts in laughter. This is the candor and humor with which Holliday has built her brand; the perfect recipe of self-love, beauty, and irreverence. Her new book, The Not So Subtle Art Of Being a Fat Girl, takes readers through her tumultuous childhood, her parents divorce, and the shooting that her mother miraculously survived. Holliday also writes about dropping out of high school, getting her GED, and becoming a single mother at 20-years-old, and doles out self-love advice regularly throughout: "Authenticity is important," she writes "Stretch marks are totally normal. Everyone has them. Chill."

"It's so weird that people are actually reading it," Holliday tells me. "It's so surreal because I worked on it for so long. Part of why I wanted to write the book is... it was my way to tell my story. And it was also a way for me to kind of tell people that... you never know what's going on or where [someone's] from. We should all be respected."

At five feet, five inches tall and a size 22, (not to mention decorated with tattoos and a septum piercing), she's not the woman you'd typically see in the glossy pages of magazines — but she's working to change that.

"Growing up, I didn't have anyone that looked like me," Holliday explains. "I didn't have anyone that I identified with. I felt very alone. I was very isolated. Obviously, where I grew up [in Mississippi] was not the most progressive place in the world, and that's why I always joke that Miss Piggy's my role model, because she was the first fat entity that was glamorous. So that's why I've tried really hard to break down a lot of that and say that it's not ok that we don't have more diversity, especially in the plus size industry."

Holliday may be the largest woman to be signed by a major modeling agency, MILK Management, and was voted one of the top plus-size models in the world by Vogue Italia, but, as Holliday recounts in memoir, her journey was far from smooth. In fact, with so many physical and emotion bumps in the road, the fact that she's made it this far is merely a testament to her supernatural inner strength.

"I wanted the book to be relatable for people to get it and get something out of it," Holliday declares, "And I wanted it to be accessible. When I did the book, I worked really hard to make sure that it sounded like how I talk in real life. I feel like I read books by maybe like personalities and they use words they normally wouldn't use and it's kind of in a tone that doesn't really sound like them."

In her memoir, Holliday discusses numerous topics, like rape, abuse, sex, sexuality, and the harsh realities young motherhood. They're all topics that many might shy away from putting in the public consciousness, but Holliday recounts every little detail — from her biggest mistakes to her triumphant successes. In doing so, she hopes that her readers might glean some important life lessons to guide them down the right path.

"I know that there's a lot of stuff I talk about that maybe isn't appropriate for younger ages." Holliday jokes. "I don't know how many times I say fuck, but I hope that at least if there's someone in their lives that they can have those conversations with... and kinda educate them so that they don't go through some of the stuff I had to go through."

Despite her difficult past, Holliday was able to build a solid brand. She started gaining social media traction when she created the #effyourbeautystandards campaign. After stumbling across negative comments about her body on Tumblr, Holliday cropped four photos of her wearing outfits that fat women are told they shouldn't wear, like bikinis, sleeveless tops, and tight dresses. She posted the collaged pic to Instagram with with the caption, "If you're tired of people telling you what you should wear, post a picture of yourself with the hashtag #effyourbeautystandards."

"As someone who lived in a plus size body, I had a lot of hangups about my body," Holliday explains. "I had a lot of issues. I had a lot of struggles. But through doing #effyourbeautystandards I realized that it's something everyone deals with. Even the people that are trolling you, that's why they're trolling you. I realize that it's not just a plus-size problem: man, woman, it crosses all genders, all races. I mean everyone literally deals with having some kind of body image problem. Not everyone gets to talk about it, not everyone gets a platform, so #effyourbeautystandards gave a lot of people their platform."

Of course, sometimes visibility like Holliday's comes at a price. Fans and internet trolls alike fill in the blanks between the posts and assume details about her life, including snide remarks about her health and weight to criticism of her character. Still, for her, it's worth the pushback.

"If you have a platform with social media and you're not using it to speak out against things that are going on," Holliday says, "Then you're really doing everyone a disservice in my opinion."

Fans of Holliday's celebrate her as an impossibly confident beacon of body positivity, but she admits it isn't always easy, and that she, too, still struggles with self-love.

"Anyone who says that they don't is a big fat liar," Holliday says. "It's really hard. Some days I have good days, some days I have bad days. There's elements around me [that impact how I feel]... like maybe I'm having an off day, maybe it's the weather, maybe my skirt's too tight, whatever. So I've had to make sure that I'm a bit kinder to myself on the days that I'm having a bad day."

There is a lot of that kind of affirmation in The Not So Subtle Art Of Being A Fat Girl, which isn't just an autobiographical account of Holliday's life, but a collection of her most important pieces of advice, the kind she's built her entire brand around.

"What people need to remember is that the world is a small place you need to treat other people kindly," Holliday explains. "It will always come back to you, always. I've learned the hard way, trust me. Just be nice to people."

The Not So Subtle Art Of Being A Fat Girl was digitally released in the US on Sept. 12 and in will be in stores on Sept. 26. You can order her book here.

More like this
How To Curl Your Hair With Leggings, According To TikTok
By Carolyn Steber
TikTok’s New Beauty Hack Involves Drying Your Hair With A Pasta Strainer
By Catharina Cheung
24 History-Making Black Women You Probably Didn't Learn About In School
By Ayana Lage and JR Thorpe
25 Inspiring Quotes From Black Women To Celebrate Black History Month
By Kyli Rodriguez-Cayro and JR Thorpe
Get Even More From Bustle — Sign Up For The Newsletter
From hair trends to relationship advice, our daily newsletter has everything you need to sound like a person who’s on TikTok, even if you aren’t.