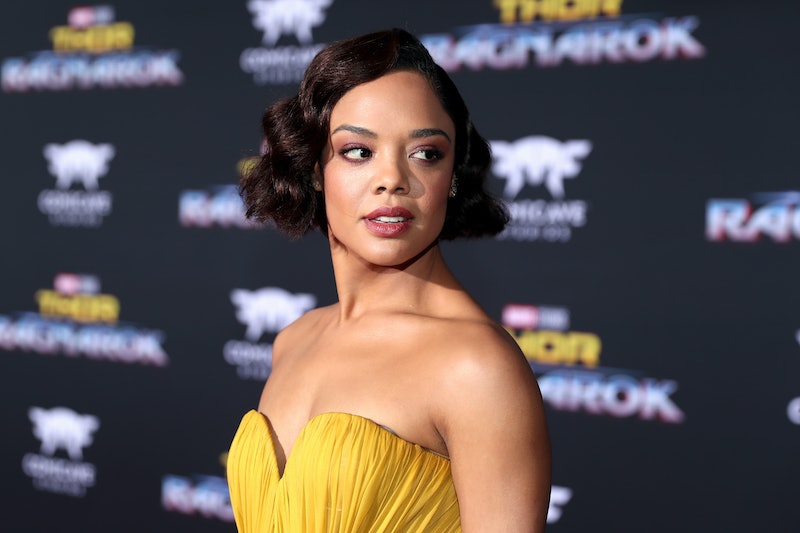 Avengers, it's time to assemble a new group of world-saving heroes — one that's made up of the butt-kicking Marvel ladies. Thor: Ragnarok actor Tessa Thompson wants an all-women Avengers movie, and she's not alone. According to io9, during a recent press conference to promote the new Thor movie, Thompson said, "Recently, I marched up with a couple of other women that work in Marvel and we went to Kevin [Feige, Marvel president] 'What about a movie with some female super heroes? Like all of them?'" Yeah, Feige, how about it?

Since the Marvel cinematic universe began in 2008, the studio has failed to release a single female-centric superhero movie. Currently, they only have one on their slate, Captain Marvel, which won't hit theaters until 2019. Fans have been asking for a Black Widow movie for years, but the only original female member of the Avengers has only been allowed to play a supporting role in movies about her male teammates. Seeing all of the amazing female heroes in the MCU banding together for their own mission wouldn't make up for the lack of love Marvel has shown its female characters, but it would make for a groundbreaking film. And there's a chance it might actually happen.

At the press conference, Feige revealed his answer. He said,

"It was a pretty amazing moment to be somewhere and have your shoulder get tapped and turn around every female hero we have is standing there going, 'How about it?' And I said, 'Yes.'"

Sadly, saying yes and actually making it happen are two different things. At least even Feige can't deny that the idea is an awesome one.

Thompson is the newest woman to join the ranks as a Marvel hero thanks to her upcoming role as Valkyrie, but she knows her comic book history. During the conference, she was quick to point out that there is precedent for an all-female team thanks to the Lady Liberators. The group appeared in 1970, and consisted of characters that mostly already exist in the MCU, including Black Widow, Wasp, and Scarlet Witch.

If an all-female Avengers did happen, then it would need those three prominent characters for sure, but it would be nice to have Valkyrie, Gamora, Captain Marvel, Maria Hill, Lady Sif, Nakia, and maybe even Nebula along for the ride. And why stop there? The Marvel universe is teeming with female superheroes who need to be introduced in the MCU. Ms. Marvel, She-Hulk, and Spider-Woman would all be excellent additions.

An women-centric team would be easy to assemble, and make for a movie experience like nothing fans have ever seen before. In the summer, Wonder Woman proved that there is a hunger to see female heroes on the big screen. Now it's up to Hollywood to answer the call.

The world needs an all-female Avengers, and not just because the opportunity to see a group of women working together to save the world should always be taken. The actors want to do it. Thompson doesn't mention which actors joined her in approaching Feige, but it sounds like it was many of the MCU's key players. If actors like Scarlett Johansson, Zoe Saldana, and Thompson want to make a movie together no one should stand in their way.

Marvel has already cast many of Hollywood's most talented female stars. Now it's time to let them play off of one another in the same way that Mark Ruffalo, Robert Downey Jr., and the rest of the guys have been given a chance to. With the Infinity War coming up, Marvel is about to enter an entirely new era, and that era would be so much better if it included a movie that finally put all of the MCU's amazing female heroes on the same team.