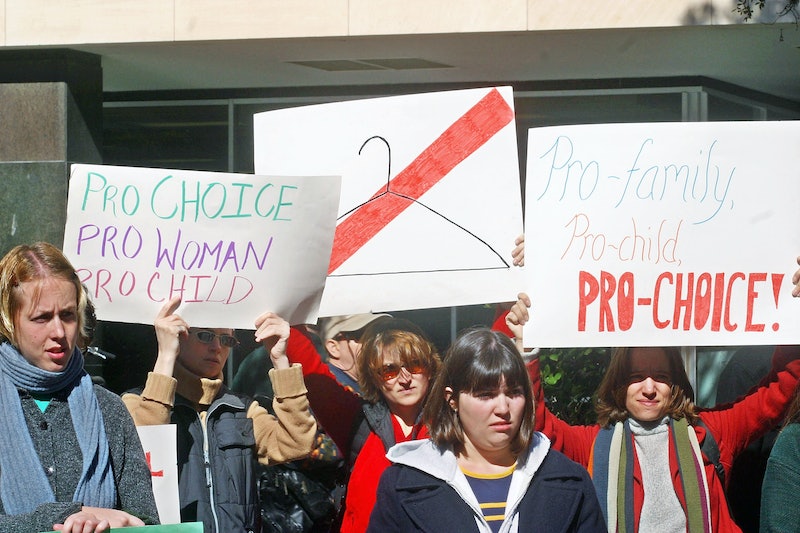 As the Senate Judiciary Committee continues to question Brett Kavanaugh, abortion rights advocates are particularly focused on the Supreme Court nominee's responses to questions concerning Roe v. Wade, contraception, and reproductive freedom. But questions about abortion are not limited to the country's highest court; in states like Texas, for example, abortion access is still highly restricted. Moreover, a new study from the Journal of Adolescent Health has found that minors seeking abortions in Texas face many legal hurdles, especially when they are unable to obtain parental consent.

According to the ACLU of Texas, a teenager under the age of 18 can get an abortion without the consent of a parent or legal guardian if they successfully file an application for judicial bypass. This is a confidential process in which a judge grants permission to obtain an abortion without parental involvement or knowledge. However, the new study from the Journal of Adolescent Health found that many adolescents in Texas ran into difficulties when trying to obtain a legal bypass.

Researchers interviewed 20 teenagers who were 16 or 17 years old at the time they went to court. Some of these adolescents reported difficulties arranging transportation to the courthouse, and then further complications once there. Each teenager was assigned a guardian-ad-litem (GAL) by the court, the study reported, ordered to act in their best interests. However, multiple teenagers told researchers that their GAL was a pastor or deacon at a church, and did not hide their disapproval over the teenagers' efforts to seek an abortion.

One of the teenagers interviewed told researchers that judges asked her for a detailed sexual history, which the court reporter was also able to hear. Another teenager said that her GAL brought staff members from an adoption agency to court, in order to discourage her from having an abortion while simultaneously violating her anonymity. According to Kate Coleman-Minahan, a social scientist who led the study at the University of Colorado College of Nursing, the judicial bypass process was often unfair to teenagers interviewed.

"Some judges and GALs based their decision or treatment of adolescents on their own personal opinion of abortion," Coleman-Minahan said following the study. "Multiple participants cried during the interview when describing the hearing, saying they still think about it, even months later."

In an op-ed published in the Austin-based My Statesman, Coleman-Minahan added that "the court process" for obtaining a judicial bypass "exposes adolescents to humiliation, stigma, shame, and in some cases, trauma." Both Minahan and the study's researchers pointed out that many of the teenagers who seek judicial bypasses have been physically or emotionally abused by family members, but then are asked to discuss details of their private lives in front of complete strangers in court.

Republican lawmakers in Texas have worked to make the judicial bypass process even more difficult in recent years. In 2015, for example, Texas Republicans tried to pass a bill that would name judges who provided judicial bypasses to minors seeking abortions, in order to discourage them from doing so.

The procedure to obtain a judicial bypass in Texas also grew more difficult in 2016, when new legal hurdles were introduced. According to The Texas Tribune, new rules passed at the end of 2015 gave judges a longer amount of time to rule in judicial bypass cases, and also placed a greater burden of proof on minors to prove that notifying their parents of an abortion would not be in their best interest.