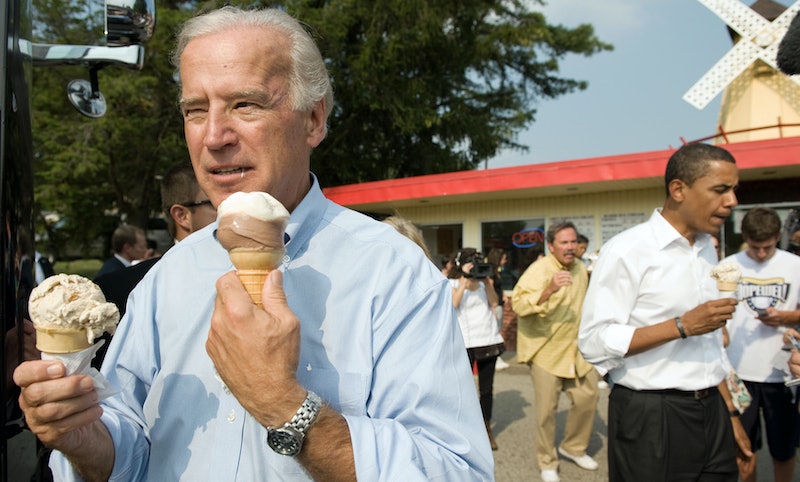 When Joe Biden agreed to be Barack Obama's running mate in 2008, he probably didn't expect his memeability to become one of the most notable aspects of his vice presidential legacy. But that's precisely what happened: To say Biden has been the source of memes over the last eight years would be an understatement. Rather, he's become the source of no less than fifteen different varieties of meme. To bid farewell to America's Uncle, here are the best Biden memes — ranked.

Why exactly has Biden become so heavily memed during his time in office? It's not entirely clear. His folksy good-nature and congeniality surely have something to do with it. His penchant for harmless gaffes is probably a big part of it as well. And don't forget about his flamboyant mannerisms, which have brought much-needed comic relief to tense political situations more times than one. Perhaps most of all, his brotherly friendship with President Obama continues to charm America, even as both men are on their way out of the White House.

Whatever the reason, Biden's memes have been one of the great joys of the Obama presidency, and we can only hope they continue long after he leaves office. Here's the definitive ranking of the best Biden memes in descending order from the last eight years.

This was a thing after the 2012 vice presidential debate between Biden and Paul Ryan. While funny, it's sort of a one-time gag, and is thus one of the lesser Biden memes.

Christmas Biden memes are great, and they'd be higher on the list if only there were more of them. As it stands, they only come around once a year.

Whether The Onion's caricature of Biden technically counts as a meme is debatable, but it would be criminal not include it on this list. The satirical newspaper's depiction of the vice-president has played an enormous role in shaping the public's perception of Biden, and we can all agree that this was for the best.

Did you know Biden was super hot when he was young? Well, you do now. This meme should have become more popular than it was.

Occasionally, meme-world Biden references the fact that he's in a meme. It's clever, but sometimes a bit too clever.

A Biden meme of indeterminate origin, this one is centered around the idea that the vice-president is secretly a huge hip hop fan. Let's just not think about it too much and assume that yes, he is.

Whether it's the slightly cautious look on Biden's face or the fact that he's holding a football for no apparent reason, this picture quickly became a prime source of Biden meme-age.

When Obama surprised Biden with the Presidential Medal of Freedom in January, the vice-president's tears flowed. So did the memes about his tears.

Every now and again, Punny Biden makes an appearance, treating Obama to some wordplay with varying degrees of success.

"My name is Joe Biden, and I love ice cream," the vice president once said, and he was not kidding. Biden has been photographed eating ice cream countless times, and the picture of him licking a scoop in sunglasses while holding two ten dollar bills is one of the greatest pictures of any American politician, ever. Ice Cream Biden has been known to intersect with Medal of Freedom Biden (see below).

As in any solid friendship, meme-world Biden sometimes pushes Obama's buttons for the fun of it. But he knows it's all in good fun.

The flip side to Mildly Irritating Biden, Needy Biden just wants a little bit of support from his boss. What's wrong with that?

3. Biden Gazing Out A Window

This picture of the vice president staring contemplatively out the window instantly became one of the most popular Biden memes. Is he sad? Pensive? Determined? All three? The ambiguity behind his expression is surely part of why this meme took off the way it did.

Some of the best Biden memes came about in the twilight of his vice-presidency, shortly after Trump's shocking victory in the 2016 presidential election. In order to cope with the impending Trump White House, America turned to Uncle Joe. While the prospect of Biden playing pranks on the incoming president will not prevent Trump from taking office, it sure makes that pill a lot easier to swallow.

This is it, really. The friendship, bromance, brotherly love — whatever you want to call it — between Biden and Obama has become the stuff of legend. These two guys really, really like each other. At his farewell speech, Obama said that he and Michelle's friendship with the Bidens "has been one of the great joys of our life," and it shows.

Seeing Biden and Obama leave the White House will be tough, but don't despair: Imagine all of "Obama and Biden hanging out as buddies" memes we'll see once the two are no longer in government.