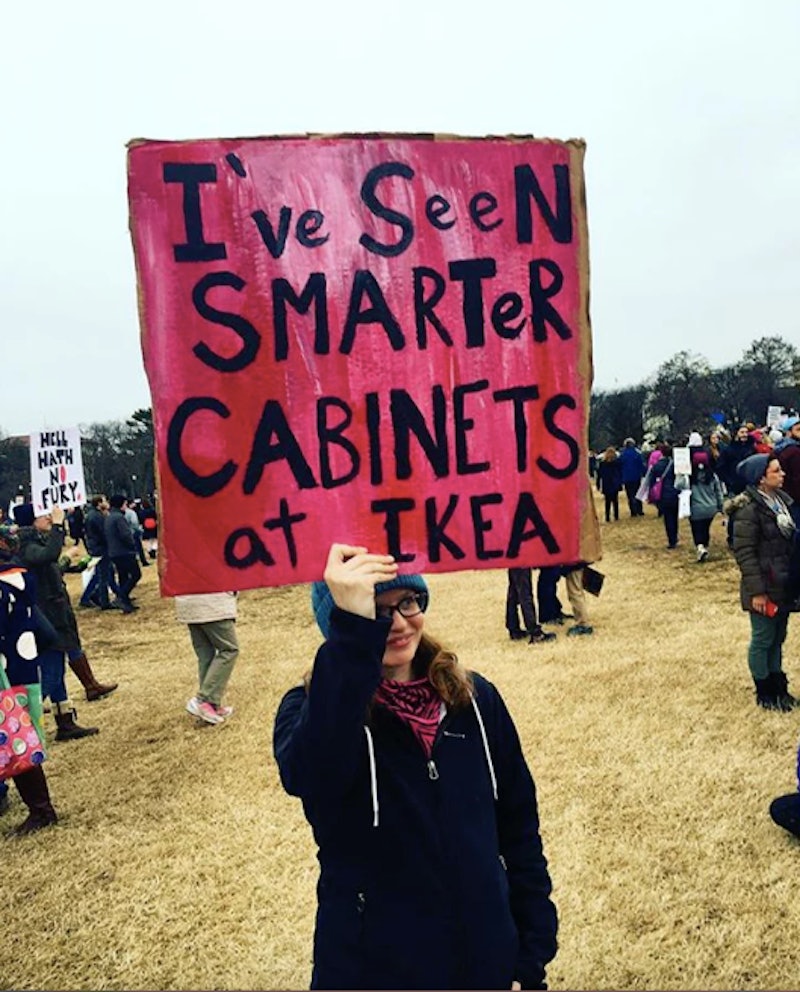 Against all rules of logic, fairness, and self-tanner, Donald Trump is officially the 45th president of the United States. While this new regime makes me want to hide in a basement with four years worth of Klonopin and Le Croix, that's just not a realistic option. How will I be able to afford Klonopin post-Obama Care? And who has a f*cking basement? Like millions of other Americans (over half the country, if we're being real), I'm grappling in the darkness to try and find some type of light.

Which is why the Women's March on Washington was so deeply meaningful to me. Although I live in L.A. and it was a major schelp, I decided to fly out to D.C. with my mom and sister for the event. When we arrived at the march, we were instantly welcomed by hundreds of thousands of protestors, people of all races, ages, and gender identities. Looking out among the astonishingly diverse crowd, I thought: This is the real America. This is who we are. And no amount of backward, close-minded leadership can stop the inevitable move to progress. Watching tiny six-year-old girls leading chants and groups of queer and immigrant teenagers screaming for freedom I realized — the good ol' boys can't stop us. Because we are the future.

The most emotional moment I had during the six hour, 10-mile march was when I got swept up in a spontaneous chant led by a pack of passionate college undergrads.

I proudly yelled until my voice gave out and my eyes started to flood with water. I thought about the depth and power of those words. This is what democracy looks like. I was feeling something that had completely left me for the last year: pride in my country. I cried, feeling so deeply grateful and lucky to live in a place that allows and encourages its citizens to freely express dissent. It's a cornerstone of American democracy and it feels more fragile than ever under the current regime.

I have never been a joiner. I’ve never felt like a part of any group or club. But in D.C., marching with my sisters and brothers, I felt like I finally found my people. Below are pictures I took of 16 of my absolute favorites signs at the Women's March. The signs represent the people I met on that amazing day; witty, compassionate, smart, and NASTY.

This sign/shirt is the new little black dress. You can dress it up for a date with heels, or throw a pencil skirt over it for work — point is, you need to own it.

I love this letter to the patriarchy. It's short, sassy, and sweet, just like it's author.

Nothing like seeing a modern day Daria fighting the man.

TFW you literally have the best sign out of 1.2 million people and it's not even a big deal because, "Duh, I'm clever. Get over it."

To be fair, everyone's hair is full of secrets. My hair's secret is that it's Jewish and frizzy and takes a village, including hairdressers, products, and expensive tools, to make it look acceptable for the outside world. Shhhh!

This sign rules because it's super clever and the reference is obscure enough that if you get it you feel Wes Anderson-levels-of-hip. Plus, the guy looks like a friendly wizard!

This sign reminded me of the scene in Pretty Woman when Julia Roberts busts into that snooty clothing store to confront the mean salesgirls shouting, "Big mistake! Huge!" I asked the kid holding the sign if it was a reference to the movie and he goes, "What's Pretty Woman? Is Julia Roberts a singer?" Point is, if you need me, I'll be getting a facelift — because, apparently, I'm old as hell!

I'm not a professional photographer, which is why it looks like a giant dick is growing out of her sign. But still, IMPORTANT POINT!

Yeah, it's stuck in my head now too.

Somebody really needs to tell the guy.

OK, so maybe the hair jokes aren't "going high" — but it's true.

Getting old doesn't mean getting lame. Check out this total BAMF for proof! #aginggoals

I also refuse to go back to the 1950s. Tuna casserole, mushy greenbeans, and jello is a fancy meal? No, thank you. Also, the racism and sexism.

Me after a bad internet date.

All it takes is Trump appointing one sexist, conservative judge to overturn Roe v. Wade. We cannot take our right to choose for granted. We must fight today and everyday to protect women's autonomy over their own bodies.

The Women’s March was the largest march on Washington in American history and it was was peaceful, positive, and uplifting. I will carry the experience of solidarity, inspiration, and love with me forever. Although America is deeply flawed and built on institutionalized racism and sexism, I remembered that I love my country and think it's worth fighting for. For every Trump, there is an Obama; for every Pence, there is an Elizabeth Warren; for every Sarah Palin, there is... a half-eaten sandwich I could finish.

To anyone feeling anxious and scared about the future of our country, I encourage you to get politically involved and spend time around like-minded people, fighting for change. It will renew your faith, it will heal your heart, and it will give you purpose. Human beings are pack animals, and we need each other to survive. There are so many good people in the world, do yourself a favor and find them.