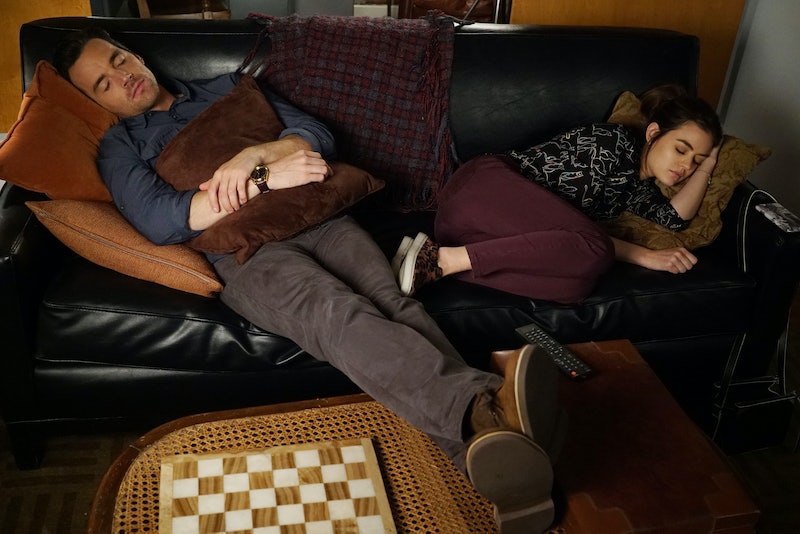 As a major fan of Pretty Little Liars, there's one couple I've been rooting for right from the very start: Ezria. While Ezra Fitz and Aria Montgomery haven't always had the most appropriate relationship, the pair's chemistry is undeniable. That's mostly thanks to the acting talents of Ian Harding and Lucy Hale, and the characters they've helped create over the past seven seasons. So as Season 7B draws to a close, it's the perfect time to revisit the best Ezria moments from Pretty Little Liars, before we have to say goodbye for good.

Aria and Ezra's relationship started in an extremely scandalous way, when it turned out that Ezra was Aria's high school English teacher. While their love affair was kept secret for a long time, eventually the pair went public with their feelings for one another. Despite criticism and disapproval, this couple couldn't stay away from one another, and when Pretty Little Liars flashed forward several years, it was revealed that Aria never really got over Ezra.

Now that the couple is engaged and planning their wedding, Ezria 'shippers have a lot to look forward to in the final episodes of Pretty Little Liars. Here are just a few of the most unforgettable Ezria moments that have happened so far.

More like this
Here’s What Happens To Bill & Frank In 'The Last Of Us' Video Game
By Brad Witter
Everything To Know About 'And Just Like That...' Season 2
By Jack Irvin and Grace Wehniainen
'The Last Of Us' Episode Schedule Competes With The Super Bowl & Oscars
By Brad Witter
'The Last Of Us' Episode 4 Put Twitter Into An Emotional Spiral
By Alyssa Lapid
Get Even More From Bustle — Sign Up For The Newsletter
From hair trends to relationship advice, our daily newsletter has everything you need to sound like a person who’s on TikTok, even if you aren’t.