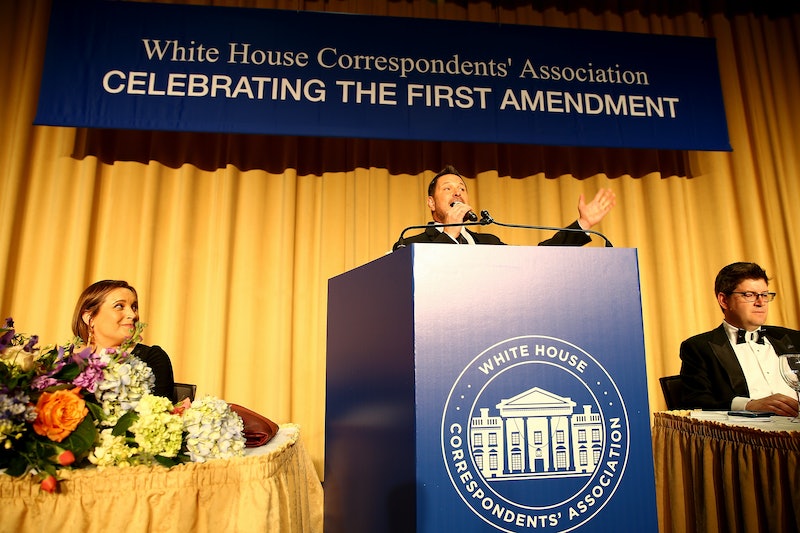 For years, comedians like Jon Stewart and Stephen Colbert have roasted government officials at the White House Correspondents' Association's annual black-tie dinner. But this year appears to mark a significant shift in direction for the event as, for the first time in 15 years, a comedian won't host. Instead, the 2019 White House Correspondents' Dinner host is presidential biographer Ron Chernow.

"The White House Correspondents' Association has asked me to make the case for the First Amendment and I am happy to oblige," Chernow said in a statement. "Freedom of the press is always a timely subject and this seems like the perfect moment to go back to basics."

And who better to discuss one of the pillars of democracy than a historian, Chernow argued in his statement. "My major worry these days is that we Americans will forget who we are as a people and historians should serve as our chief custodians in preserving that rich storehouse of memory," he said.

While it's unclear exactly how Chernow will tackle the dinner's traditionally comedic monologue, in announcing the 2019 host in November, White House Correspondents' Association President Olivier Knox said the famed biographer would "share his lively, deeply researched perspectives on American politics and history." But Chernow has said he hopes fans of comedy won't completely write the dinner off just because there will be a historian at the helm.

"While I have never been mistaken for a stand-up comedian, I promise that my history lesson won't be dry," he said in a statement.

There's long been some debate about whether the White House Correspondents' Dinner truly represents journalistic values, but last year's event proved particularly controversial after host comedian Michelle Wolf roasted White House Press Secretary Sarah Huckabee Sanders in a monologue the association later said was "not in the spirit" of the dinner's mission.

"Last night's program was meant to offer a unifying message about our common commitment to a vigorous and free press while honoring civility, great reporting and sponsorship winners, not to divide people," then-White House Correspondents' Association President Margaret Talev said in a tweeted statement. "Unfortunately, the entertainer's monologue was not in the spirit of that mission."

President Trump, who has so far declined to attend any of the three White House Correspondents' dinner held during his presidency, called the 2018 fete "a total embarrassment to everyone associated with it." He recommended putting an end to the annual event. According to The Hill, Trump's 2020 reelection campaign has announced plans to "counter" this year's dinner with a rally in Green Bay, Wisconsin. Earlier in the month, The Hill reported Trump had told reporters he planned to skip this year's dinner as he thought the event was "boring and so negative."

In straying from its long-held tradition of having a comedian host, it seems as if the White House Correspondents' Association may be hoping to avoid a controversy similar to the one it saw in 2018. But not everyone appears to be happy with their move away from a comedic monologue.

"The @whca are cowards," Wolf tweeted in November when the association first announced it had chosen Chernow as host of this year's dinner. "The media is complicit. And I couldn't be prouder."