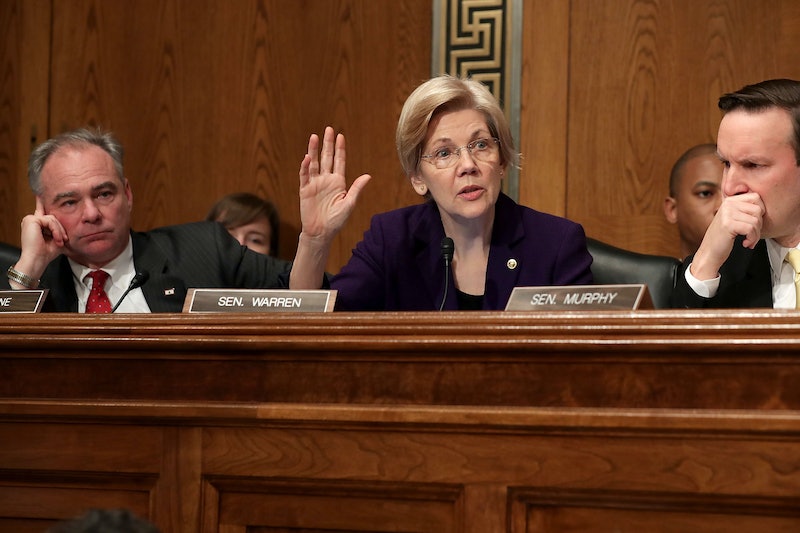 When Senate Majority Leader Mitch McConnell silenced Massachusetts Sen. Elizabeth Warren on Tuesday night after she attempted to speak on the Senate floor, it was perhaps inevitable that people everywhere would be furious on Warren's behalf — leading, of course, to a storm of "nevertheless, she persisted" tweets hitting social media. It isn't just Warren, you see; it's women. And it's not even just women — it's every marginalized group who has ever been repeatedly silenced by systemic and structural sexism. It shouldn't be surprising, but the response to this specific event ironically speaks volumes. We will not be silenced.

Many social media users are reclaiming McConnell's words to Warren. His defense of his invoking an obscure and rarely enforced rule (a rule which, many pointed out, did not get enforced during an incident in 2015 when Ted Cruz accused McConnell of lying) was as follows: "Senator Warren was giving a lengthy speech. She had appeared to violate the rule. She was warned. She was given an explanation. Nevertheless, she persisted."

Those last three words became iconic, as people all over the country and the world reclaimed them. Some have used them as an opportunity to celebrate women who have come before us and pushed forward in spite of oppression and marginalization. Other users have turned the phrase on its head, using dry humor and wit as means of pointing out how ridiculous the patriarchy is. Still others are taking the opportunity to thank Warren and other female politicians, like Hillary Clinton and Wendy Davis, for their work and dedication.

Check out the following 35 tweets for inspiration to keep on the good fight and never stop persisting.

More like this
Watch Jacinda Arden’s Devastatingly Honest Resignation Speech
By Sam Ramsden
25 Inspiring Quotes From Black Women To Celebrate Black History Month
By Kyli Rodriguez-Cayro and JR Thorpe
25 Galentine's Day Games To Play On Zoom With Your Long-Distance Besties
By Mia Mercado
21 Galentine’s Day Memes To Celebrate Your Best Friends
By Meghan Bassett and Mia Mercado
Get Even More From Bustle — Sign Up For The Newsletter
From hair trends to relationship advice, our daily newsletter has everything you need to sound like a person who’s on TikTok, even if you aren’t.